Self-management strategies have been used for students with a wide range of academic and behavioral challenges, including students with ASD. Teaching self-management is a pivotal behavior for students to learn how to independently regulate their behavior across many situations. Although teachers and family members may initially play a major role in the implementation of the system, ultimately, the responsibility for ongoing use of the system should be passed to the student as much as possible. This material provides information about how to individualize a self-management system for a student with ASD. This will include the steps needed for a student to learn to discriminate between appropriate and inappropriate behaviors, monitor and record their own behaviors, and reward themselves for meeting a specified goal.

Self-Management Systems for Students with ASD

Self-Management is one of only two of the evidence-based practices (EBP) identified in the 2020 Evidence-Based Practices report by NCAEP that crosses every domain and age level. By learning self-management techniques, individuals can become more self-directed and less dependent on continuous supervision. Instead of teaching situation specific behaviors, self-management teaches a general skill that can be used in an unlimited number of environments.

How can an evidence-based practice with this much promise be so underutilized when educating students with ASD? Most likely it is due to a lack of understanding of self-management, a belief that self-management can only be used with older students, or concern that it is too complex for some students.

There are five basic components to a self-management plan:

What is the target student doing that is interrupting instruction or disruptive compared to peers? Collect data to identify the frequency and duration of the disruption, and the purpose or function of the disruption (e.g. get information, talk about preferred interest, he doesn’t understand the content, gain attention).

Problem: Terry verbally interrupts the teacher an average of 8 times per hour in order to access teacher attention and talk about Disney movies.

Operational definition of replacement behavior: Terry will raise his hand to get the teacher’s attention during class lectures and wait to be called upon by the teacher before responding.

What are the student’s interest areas? This will assist in the development of the system to promote engagement. If the student is interested in Disney movies, then the system can incorporate this interest and reinforcement can be delivered contingent on following the self-management system. This can include being taught WHERE and WHEN he can access the reinforcer (i.e. talking about Disney movies).

Terry’s Self-Management System allows for three HRQ’s (Hand Raising Questions) per class activity. His interest in Disney was integrated into the chart in the form of “Mickey hands.” The team is trying to limit not extinguish the number of times Terry can participate in the class instruction, and he is taught an appropriate replacement behavior for interacting in class. When Terry has a question or comment about what is being presented to the class, he can raise his hand, wait to be called on, respond, and then cross off one HRQ. When Terry has raised his hand and been called upon 3 times during one class activity, he will not be allowed to comment/question again until the next class activity, at which time he will be given three more HRQ’s. The HRQ’s give Terry information about how many times he may question/comment during a class activity.

Terry also struggled with understanding the amount of time each class lecture required so he used a timer and a class interval schedule to monitor how much time was left for the class lecture. This is represented by the middle boxes on the chart. This helped him keep track so he didn’t use up all of his HRQ’s in the first 5 minutes. The vibrating timer was set for 5 minute intervals, and Terry would cross off one box on the class interval schedule each 5 minutes. If needed, the interval boxes could be shaded to represent the amount of time each class activity would last (e.g. 20 minutes of reading lecture, 15 minutes or social studies lecture) since these may vary by day.

Step 4. Teach the individual to use the self-management system

The team needs to teach the Self-Management System to Terry through explanation, modeling, and prompting as needed, including:

Terry will need to practice to become independent with the schedule. After the first week, team members will observe class activities and take data to determine Terry’s independence in using the Self-Management System. The teacher and the LINK student will be taught to fade prompting in order to reduce the frequency and intensity of reminders provided. 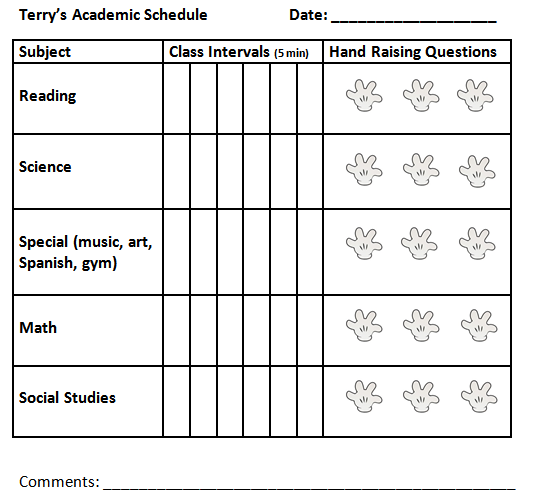 
Page last modified January 13, 2022
Report a problem with this page