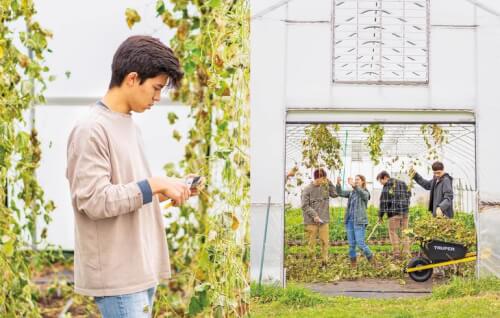 What started as a class project in 2008 has grown, quite literally, from a small community garden to a fully operational farm that hundreds of Grand Valley students have used as a learning-living laboratory.

The Sustainable Agriculture Project, or farm as it’s often called, is celebrating its 10-year anniversary this year. The four-acre space south of the Allendale Campus on Luce Street includes two hoop houses and a greenhouse, and offers community-shared agriculture and community garden programs.

“This all began 10 years ago when a group of students and Kelly Parker (professor of philosophy) had a vision for a garden,” said Anne Hiskes, dean of the Brooks College of Interdisciplinary Studies. “It has turned into a high-impact learning environment that demonstrates the university’s dedication to sustainable education.” 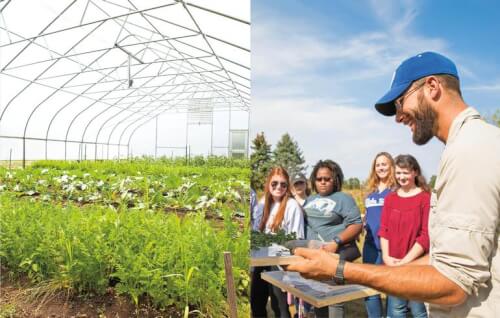 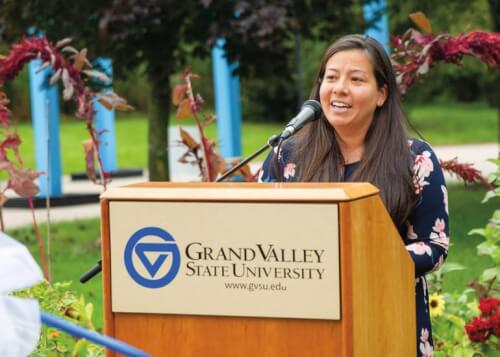 Yumiko Jakobcic, director of the Office of Sustainability Practices, speaks at the October 2 dedication of the demonstration garden near Au Sable Hall. (Valerie Wojciechowski)

Campus community members celebrated the 10-year anniversary of the Sustainable Agriculture Project in October with a dedication ceremony for a new garden on the Allendale Campus. The Demonstration Garden is located next to Au Sable Hall.

During the ceremony, President Thomas J. Haas said the new garden is a great example of student input. “When we first started talking about a farming space at Grand Valley, we worked closely with students,” he said. “It’s important that we listen to students and understand what they want to experience at Grand Valley.”

The 15-by-15-foot garden includes raised beds, which mimic the size of a typical, homemade garden. It’s maintained by student volunteers and SAP interns.

Students and classes from many disciplines use the space to learn about topics ranging from food systems and environmental science to biology and art, including Dulcee Boehm’s studio art class.

Boehm, visiting faculty member of visual and media arts, introduced her students to the SAP by assigning them to organize an art exhibit that used SAP as its exhibition space.

Boehm, who graduated from Grand Valley in 2012, has seen the SAP grow first-hand. A native of Perry, she grew up participating in 4-H and wanted to spend more time outside, so she got involved as a volunteer in 2010.

“When I came to Grand Valley, that part of my life was cut off, but I realized it didn’t have to be like that,” she said. “I remember being really glad to be outside working with my hands, whether it was weeding or harvesting vegetables.”

Last year, 24 interns from 12 disciplines plus countless volunteers spent 712 hours on the farm. Youssef Darwich, manager of SAP, said the farm also gives students opportunities to learn individually on their own time.

“We want to demonstrate the power of experiential education and give students the opportunity to learn skills that will take them where they want to go in their future,” he said.

That philosophy has earned the SAP national recognition. In October, it received the Innovative Project Award from the American Association of State Colleges and Universities. The awards program honors AASCU member institutions for excellence and innovation in several major areas of campus life and leadership. Yumi Jakobcic, director of the Office of Sustainability Practices, and Darwich accepted the award at AASCU’s Annual Meeting in Washington, D.C.

As the farm continues to grow, Darwich said its roots will remain the same. “Each year, we still maintain our community garden for students and community members,” he said. “It’s one of the ways that the farm pulls people together; they get excited to work productively toward a common goal.”

Darwich said there are many ideas for the future of SAP.

“There are all sorts of ideas and opportunities for us to expand, but we are a community-driven initiative, so the direction is determined by everyone involved,” he said. 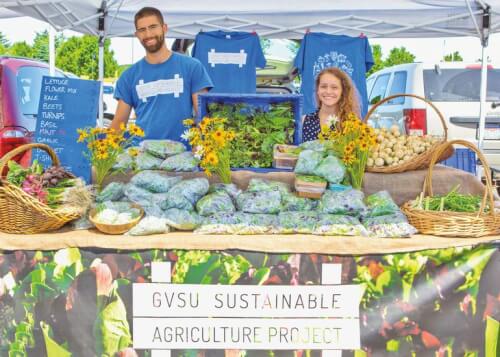