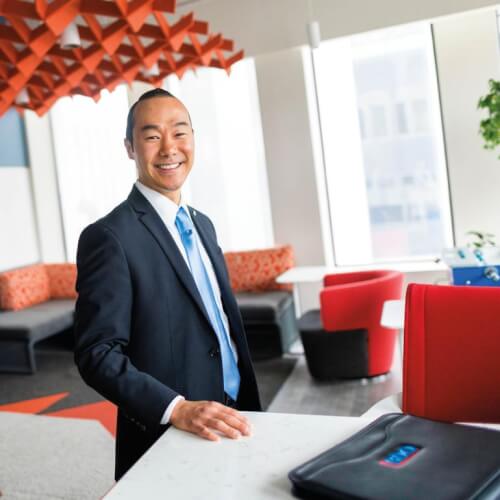 When Grand Valley alumnus Kevin Patterson earned the position of partner at BDO USA, a global accounting firm, he was the youngest person in the company and the first person of Asian descent to do so on the auditing side in Grand Rapids.

This was part of a plan Patterson worked hard to achieve. He said his drive to succeed pushes him to be involved in the Grand Rapids community and set a positive example for his 1-year-old daughter, Ella.

After earning a CPA license, Patterson worked for Crowe Horwath and moved to BDO four years ago. Patterson spoke at Grand Valley’s convocation ceremony in August, and described his connection to the Seidman College of Business, where he earned bachelor’s and master’s degrees. He talked about his success and the important roles Grand Valley graduates have at BDO USA.

Why do you think you were successful in making partner at such a young age?

Well it’s a lot of work and I enjoy being a team player. Being successful in accounting and auditing means lots of attention to detail and making sure you are paying attention to the needs of your clients. I also get to provide a diverse viewpoint to the team here. It has been my experience there’s not a lot of diversity in West Michigan, especially at the higher ranks. But at BDO I felt that my opinion was valued, and that means bringing a different perspective because I’m adopted from South Korea.

Does being adopted factor into your drive to succeed?

I grew up in Ravenna, which is a small farm community, and it’s predominantly white. My parents tried to conceive a child for several years and adopted me when I was 5. It was a real blessing to be adopted, and I have really appreciated West Michigan throughout my life. People here value positive contributions to the community.

In Ravenna, I was very involved and had good friendships. Now that I’m in Grand Rapids and making a name for myself in the business community, I look back on my upbringing and I think part of the reason I have been successful is because of my experiences growing up where hard work and strong character are rewarded. I think hard work is recognized no matter what group you’re associated with.

You enjoy giving back to Grand Valley as a mentor.

Seidman faculty members often like a real-world partner to come in to talk to students, so I visit accounting and auditing classes and talk about what my day-to-day experiences are like. I always bring another alum who works at BDO with me to give them a chance to get back on campus and help give students that experience.

Many staff members at BDO are Grand Valley graduates, right?

Out of our 200 or so employees, about half have some sort of a tie to Grand Valley. I’m one of the recruiters and I conduct on-campus interviews. Last year we had 30 interns, and about half were from Grand Valley.

Once people are hired into the company, we use a software program called Yammer that’s like social media at work, and there’s a whole page for Grand Valley alumni. We also have social events where we can get to know other alums. We’ve met with accounting professors and really feel the love of the university. Grand Valley is our best feeder school in West Michigan, and to have it at the top of all the colleges in the area is a really great thing.

Why is community involvement important to you?

I am involved in Junior Achievement as well as the Ronald McDonald House, and I serve on several other committees for different groups. Having our daughter, Ella, has changed my perspective on service.

Being involved in the community is laying the groundwork for what Ella is going to see and do. I get to help with financial literacy programs for organizations like Junior Achievement. It motivates me to fill those gaps for students who don’t have all of the resources that others may have. I really see the impact now that I’m a father and I’m looking at it a little closer.

What drives you to be a role model?

I really strive to follow the path of strong servant leaders. I want to be a servant leader both at BDO and in the community, and a lot of that involves focusing on being relentlessly positive and always trying to improve things where you are. And things don’t have to be bad to be improved. Grand Valley is a great example of that. President Haas has been an amazing servant leader for the university. People I talk to from the university seem to think everything is going pretty well, but I’ve heard him say he continues to work on making improvements every day.

I think that’s what it means to leave places better than how you found them.