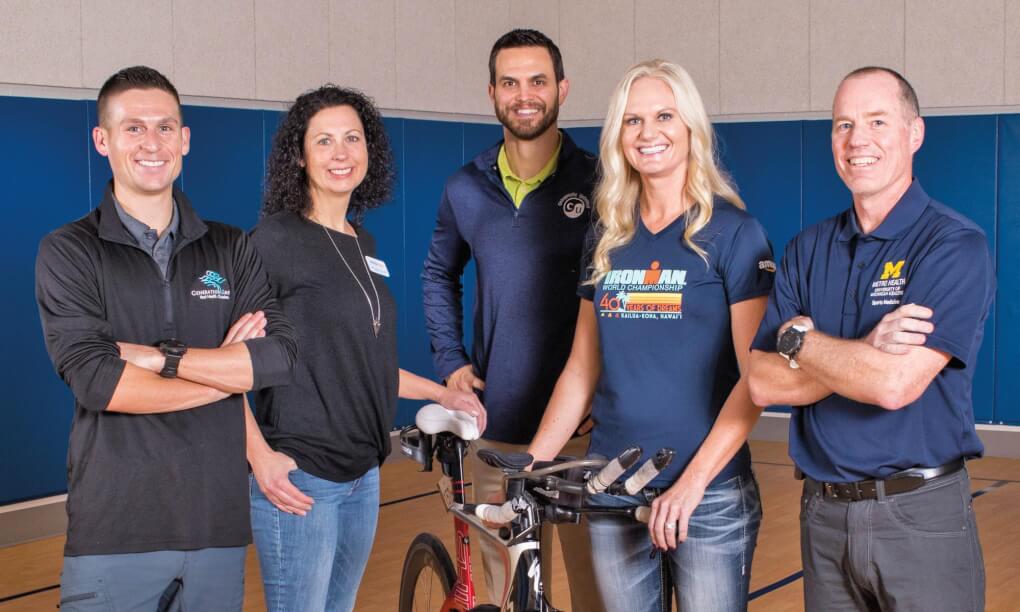 With a little help

Barely four months after undergoing surgery to remove an advanced melanoma and with only nine weeks of training, Amy (Bross) Andersen finished the Ironman World Championship in Kona, Hawaii.

The high heat and humidity forced Andersen, associate director of communications for University Development, to stop at nearly every aid station during the marathon component of the famous triathlon. The water and ice kept her physically moving, and Andersen said the motivational words her longtime coach told her to remember during the race kept her mentally alert.

Three words — embrace, wise and reflect — to conquer each portion of the Ironman (a 2.4-mile ocean swim, a 112-mile bike ride through terrain that climbed 600 feet, and a 26.2-mile run) and to remember the past year’s journey.

In addition to her coach, it took a team of area health and medical experts to make sure Andersen got to the Ironman finish line. 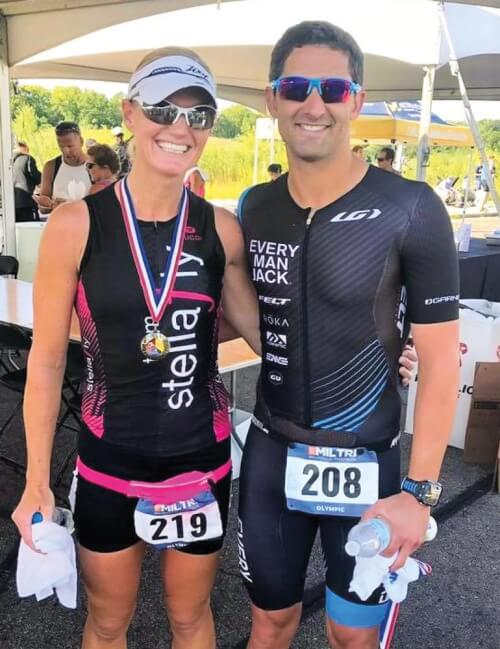 In 2017, Andersen finished the Ironman in Louisville, Kentucky, in 10 hours and 21 minutes, second in her age group. That qualified her for the October 2018 world championships in Hawaii.

“I never planned on a Kona slot but after qualifying in Louisville, I didn’t want to pass up the opportunity,” she said. More than 80,000 athletes vie for slots at the Ironman World Championship and about 2,000 qualify.

In February, Andersen began training for the Ironman under the tutelage of Ben Hammer, a local athlete and Ironman veteran.

After months of winter preparation, miles on an indoor bike, treadmill and in the pool, debilitating pain in her back and hip forced Andersen to drop out of the spring races on her calendar. An MRI revealed several bulging back discs and a stress fracture in a rib. Andersen said those first signs of trouble were nothing compared to the phone call she received from a doctor in June.

“I took the call at work and heard the words ‘advanced stage melanoma and it has likely spread’ and that ‘Kona was unlikely.’ I started sobbing,” she said. 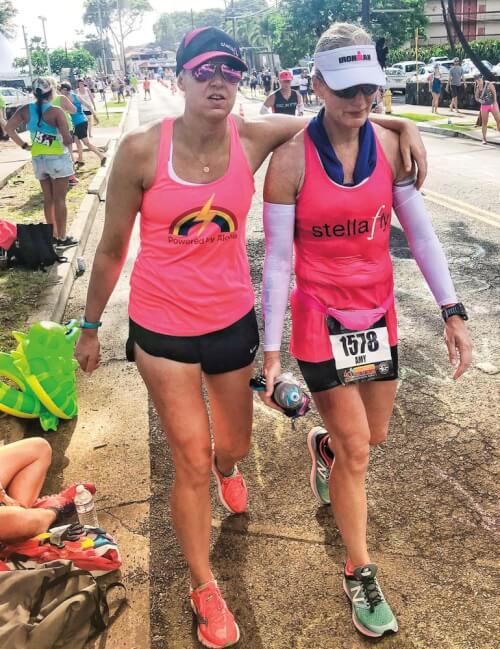 Tarra DaPrato with Andersen at the Ironman.

Andersen had noticed a mole on her abdomen turned darker but waited a few months until her annual appointment with a dermatologist to have it checked.

“I had to wait for the biopsy to come back, then received the call that it was in an advanced stage and they were handing me off to the University of Michigan Skin Cancer Center,” she said. “A few days before my surgery, the surgeon called and said they had a team review my labs and the cancer cells were thought to be contained but I still needed surgery. It was an emotional whirlwind.”

The surgeon was successful in removing the cancerous tissue on Andersen’s abdomen and, after another agonizing wait, told her the cancer did not reach her lymph nodes, chemotherapy was not needed and “Kona was back on the table,” she said.

After three weeks of recovery (Andersen said her surgeon wanted six) she slowly began training with nine weeks to go before the Ironman in Kona.

The word “embrace” was meant to remind Andersen that she survived an emotional roller coaster and had made it to Hawaii despite these setbacks.

While prepping for the Ironman, Hammer told Andersen to be wise as she transitioned out of the water and onto her bicycle.

“The bike is my favorite part and one of my biggest strengths. I needed to ride smart — be wise — and not get wrapped up in the competition like I am often guilty of doing,” she said.

She learned why energy conservation was important. The scenic route around the coast of Kailua-Kona and through its lava fields has a total ascent of 3,045 feet with one climb of 645 feet.

“It was definitely hot riding 112 miles through lava fields but because of the wind on the bike it wasn’t as harsh as when I hit the run,” she said.

Then the marathon began. The heat and humidity caused Andersen to lose fluids at a faster than normal rate. “It was near impossible for me to stay even remotely hydrated and functioning in those kind of conditions,” she said.

Hammer told her to remember the word “reflect” during the run. “He said, ‘You have made it through so many hurdles and obstacles this year. Reflect back on your journey when things got rough and remind yourself of who you are and how far you have come,’” she said.

Andersen finished the marathon and said it wasn’t easy. Her husband, family, friends, including close friend, Tarra DaPrato, were there to encourage her from the roadside.

After learning of Andersen’s melanoma, DaPrato, also a local triathlete, underwent a skin check and mole removal that was diagnosed as melanoma.

“Tarra and I are alike in countless ways, but dealing with melanoma is something neither of us expected we’d be facing together. I can’t begin to explain how much it meant to have her there,” said Andersen.

She completed the Ironman time in 12 hours, eight minutes and said a lot of that time was spent reflecting on the people who helped her get to Hawaii.

“I may have qualified for Kona on my own, but I didn’t make it to the finish line on my own.”

“I may have qualified for Kona on my own, but I didn’t make it to the finish line on my own. I had these roadblocks that often felt too massive to push through, but I also had a team of the best health care people in West Michigan who where flipping their schedules around and going above and beyond for me,” she said.

Andersen’s Ironman time in Kona was, of course, not a personal best but she said the conditions and shortened training time made it a different type of personal best.

“My plan going into Kona was to choose gratitude,” she said. “There was a chance I would have to bow out of the race because of my medical condition. I’m so grateful to have had an enormous support system of the best people in my corner.”