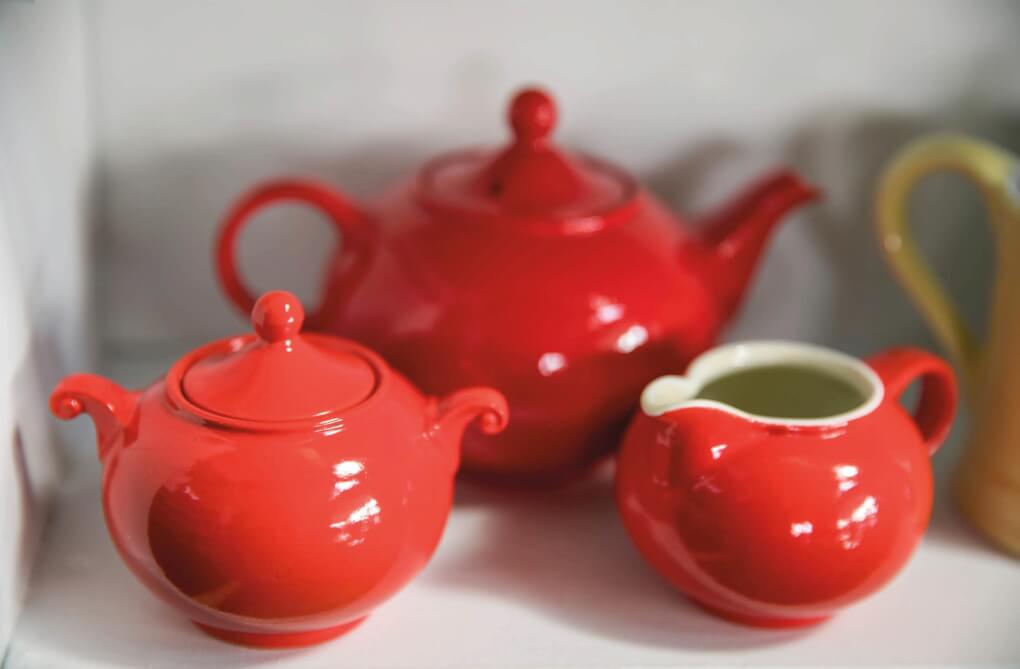 Lynn (Chick) Blue, vice president for Enrollment Development, is a teapot hobbyist whose vibrant collection includes dozens of vintage pieces that are displayed on floor-to-ceiling shelves in the dining room of her home. Her collection has been 30 years in the making.

Blue’s interest in teapots began at age 12 when her aunt gave her a red teapot set.

“I stayed with her for a few weeks in the summer in Saline, and one day when she was cleaning, she found the little red set and gave it to me,” Blue said. “I treasured them because they were so cute. She told me about this company called Hall China that made good-bone china and I became intrigued.” 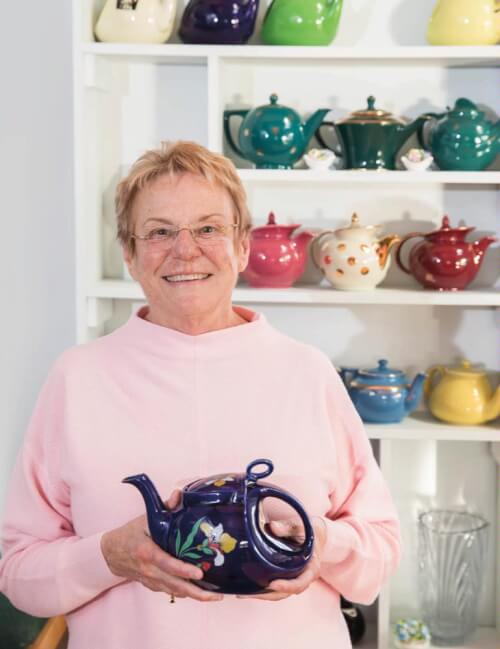 When she was about 30 years old and working at Grand Valley as registrar in the Office of Records and Registration, she began her collection by making her first teapot purchase.

“I had a few extra nickels to spend on something that wasn’t a necessity, so I went looking for a little teapot and found a morning teapot,” she said. “Over the years, I added to them and began a collection.”

Blue’s fascination with teapots stems from her interest in ceramics and pottery, which she studied during high school and college. Her collection includes a variety of shapes, sizes and colors made by Hall China, a company that was established in East Liverpool, Ohio. It is now Homer Laughlin & Hall China Company. 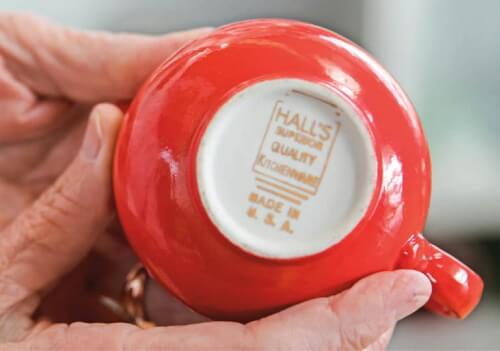 The back stamp of each Hall China piece identifies its age and authenticity.

a cream container, sugar container and 1- or 2-cup teapot for tea in the morning

“I like the work of ceramics, so I was very taken with how well these teapots were done and for how long the company has been in existence and has stayed viable by making residential and commercial dishes,” she said.

The company was founded by Robert Hall in 1903, following the dissolution of the two-year-old East Liverpool Potteries Company. When Hall died, his son took over and studied the Ming Dynasty’s glazing methods in order to create china that didn’t crack and craze. Some of the teapots in Blue’s collection are more than 80 years old but still look new. “You can tell by looking at the glaze; it’s still fine and nice,” she said.

Many of Blue’s teapots were made between 1920-1940; she finds them in antique stores and estate sales across Michigan. Each teapot has a back stamp on the bottom, which identifies its authenticity and age.

“Whenever I’m in an antique store or shop, I look for them. You can spot Hall China instantly because the china is so distinctly different,” said Blue, noting that her husband, Herb, has a sharp eye for spotting them.

The most valuable teapot in her collection was found in plain sight at an antique store, among other ceramic pieces. The teapot, called Illinois, is worth more than $300. It is light maroon with gold spirals along the top — a rare design.

“We stumbled upon this piece one day and we knew it was Hall just by looking at it,” Blue said. “We looked it up in the collector’s encyclopedia book when we got home and realized we got a find.”

Her favorite teapot is the shape of President Ronald Reagan’s head. The design was commissioned to be made in 1980 as a gift for representatives at the Republican National Convention, and not many were made. It sits on a shelf in her dining room, among her colorful collection of timeless teapots. 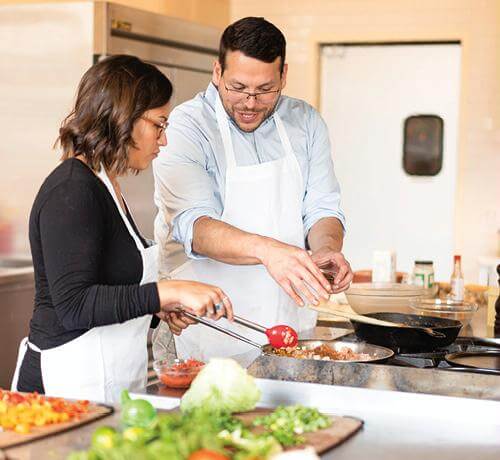