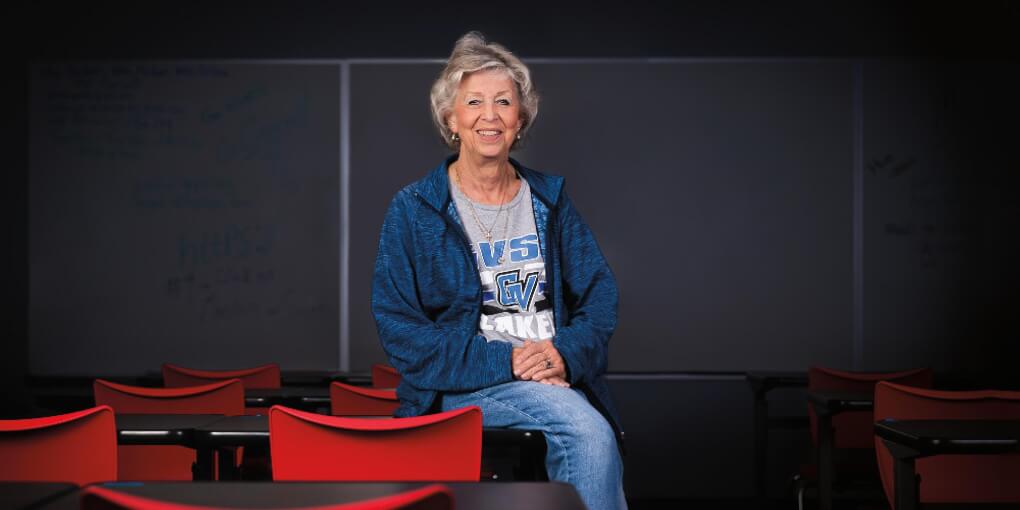 50 years in the classroom

Five decades and thousands of students later, Pat Baker continues to teach high school English and Advanced Placement English classes for Grand Rapids Public Schools. Baker, who earned a bachelor’s degree from Grand Valley in 1972 and later a master’s degree in education from Michigan State University, discusses her passion for teaching and how a study abroad trip may have helped secure her first job.

How did you choose Grand Valley?

My mom, Anna Baker, worked part-time at Grand Valley as an administxrative assistant in the music department. Then she started working for (former provost) Glenn Niemeyer. I grew up going to campus.

Did you know you wanted to be a teacher when you started taking classes at Grand Valley?

I didn’t have any idea of what kind of career I wanted. The school kept trying to get me to declare a major and I hid from them for a while until I was a junior. I thought about being a veterinarian, a doctor and a teacher.

Finally, I really thought about being a teacher. I always liked my English classes and thought, ‘This is something I could do.’

Which English classes did you enjoy the most?

I remember one about Victorian literature and I took a summer class that covered the Harlem Renaissance. During a summer Shakespeare class, we covered 10 plays and all the sonnets in 10 weeks, back when Grand Valley had terms rather than semesters.

How do you teach Shakespeare to today’s teens?

You approach it with enthusiasm. If you bring enthusiasm to anything, most students will follow. I do different things to help them understand the content. With ‘Macbeth,’ we break it up into speaking parts and move the chairs around so it creates a stage in front. For classics like ‘Beowulf’ or books about King Arthur, it’s a matter of finding exercises that help them better understand the material.

Was it hard to find a teaching job after you graduated?

I had to take summer classes, back then you needed a teachable minor, mine was history, in addition to your education major. In August 1972, when I was looking for a job, there were 2,000 applicants for teaching positions at Grand Rapids Public Schools. They hired 54 teachers that year.

Shortly after my interview, I got a phone call and an offer to teach at Grand Rapids Central High School (now Innovation Central High School). I think that was on August 30. Two days later, I started new-teacher orientation. That year I taught five ninth-grade English classes.

I stayed there for 36 years; it was wonderful. It’s the second oldest high school in the state. At one point, there were 2,200 students in that school.

Why do you think you received a job offer?

While I was at Grand Valley, I did my student teaching in Venezuela at a middle school. It was owned by an American oil company, but there were local students there in addition to the children of people who worked for the company. I was the first group from the education department to do this study abroad trip. I lived in a different culture for five months and learned that people are different and that’s a very good thing

As a new teacher in 1972, was it difficult to walk into your first class full of ninth-grade students?

It might have been, but the principal and staff were very supportive and very helpful. I made a lot of good friends there that I will have for the rest of my teaching career.

Central High School students were very diverse and most came from lower socioeconomic backgrounds. To this day, some of my best AP English classes were in that building.

Was it difficult to teach remotely during the pandemic?

When GRPS was fully virtual, it was not. Coming back to a hybrid model of group A being in person Mondays and Tuesdays, group B coming on Thursdays and Fridays, plus an all-virtual group, that was difficult. I had two laptops, one connected to the projector, going at all times. It was a lot of work and the kids recognized that it was stressful for everyone.

GRPS went through a reorganization and Central became Innovation Central. That’s when you started working at Union High School.

Yes, and after 36 years in one place, it was a little hard to figure out how to fit in at Union at first. Our population of students is similar. Many lack advantages and our school lacks some of the advantages of more wealthy districts. I love these kids and we have a great faculty and a supportive administration here.

Have you considered moving from the classroom into school administration?

I’ve been approached to do that, but I don’t want to only deal with the kids who are sent to the principal’s office. I like the classroom, I like planning lessons and I like the material.

How many more years will you teach?

I don’t know. For right now, I enjoy what I’m doing.