Mosaic Lecture 2022 by Mariel Vazquez: Where Mathematics and Biology Meet 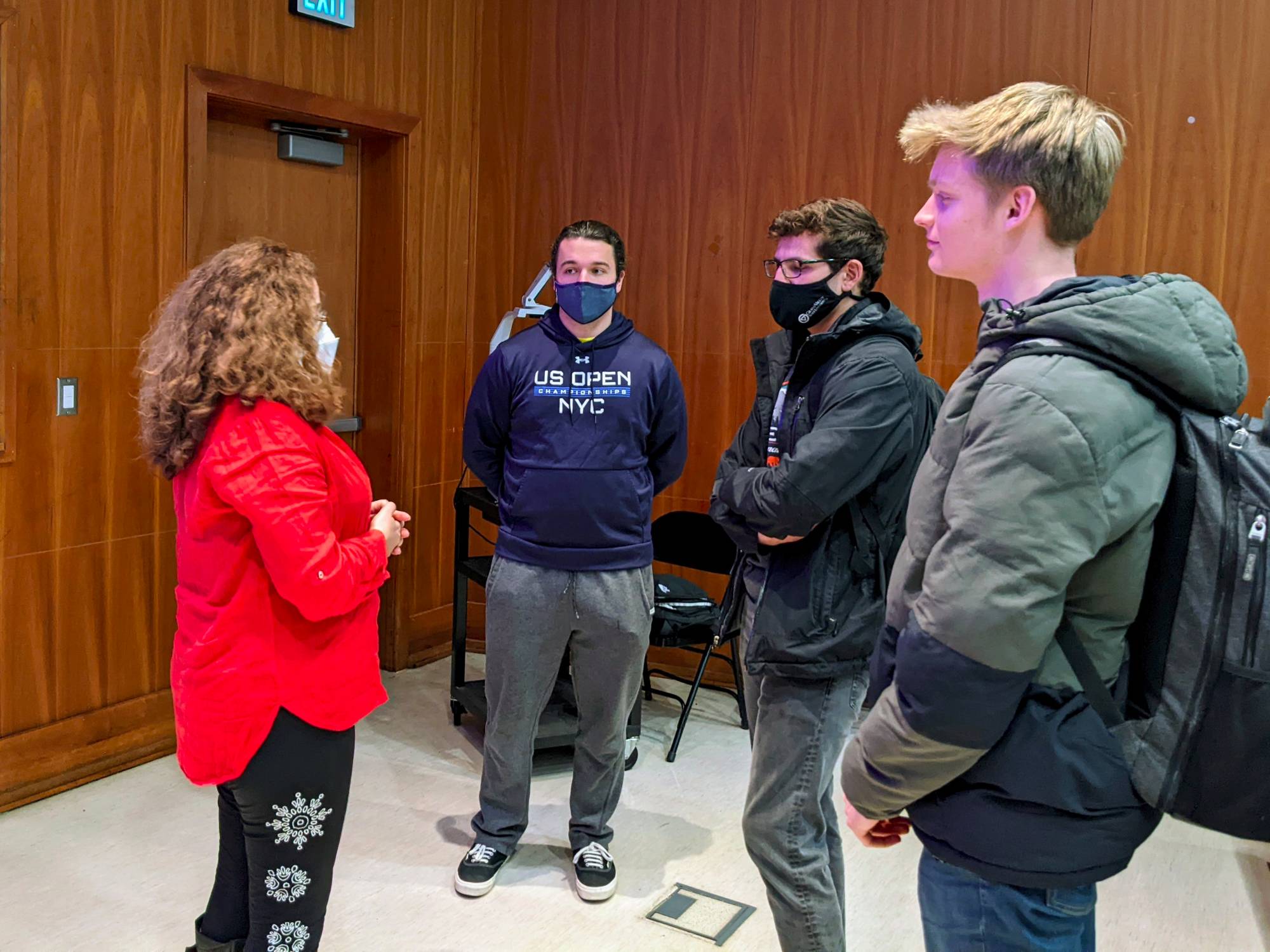 On March 29, 2022, Dr. Mariel Vazquez delivered the eighth annual Mosaic Lecture to a packed room. Professor Vazquez is a mathematical biologist in the departments of Mathematics and Microbiology and Molecular Genetics, and is also the Faculty Director for the Center for the Advancement of Multicultural Perspectives on Science (CAMPOS), at the University of California, Davis.

Professor Vazquez started her lecture with a brief biographical story and a beautiful picture of her hometown, Mexico City. She received her bachelor’s degree in mathematics in 1994 from the National Autonomous University of Mexico (Universidad Nacional Autónoma de México). She noted how different her undergraduate degree in mathematics was from that in the U.S. where she had a curriculum focused solely on mathematics courses. Although she was interested in both biology and mathematics, the flexibility of the mathematics curriculum drew her in as she was able to take classes she was interested in while also completing a senior thesis that focused on applications of mathematics to biology. She chose the topic for her thesis after attending a series of talks about DNA topology that fascinated her; she did not know how mathematics could be applied to biology until those lectures and her fascination with the topic set her on a path to become an expert in this field. Dr. Vasquez chose to complete her Ph.D. at Florida State University working under the supervision of De Witt Sumners, one of the pioneers in the field. After earning her doctorate, she was a postdoctoral researcher and a visiting professor at University of California, Berkeley for five years. Next, she was a faculty member in the San Francisco State University Mathematics Department from 2005 to 2014. In 2014, she joined the UC Davis faculty with a joint appointment in the departments of mathematics and microbiology and molecular genetics. She was a part of the first group of academics brought to UC Davis by CAMPOS (Center for the Advancement of Multicultural Perspectives on Science) and has been the director of the CAMPOS since 2019.

Professor Vazquez has received numerous awards for her research, her work to increase diversity in the mathematical sciences, and her outreach efforts. She was awarded the National Science Foundation (NSF) CAREER Award in 2011 and the Presidential Early Career Award for Scientists and Engineers(PECASE) in 2012 “for excellent interdisciplinary and international research at the interface of mathematics and biology, and for creativity and dedication to recruiting, training, and mentoring, and helping students from underrepresented groups achieve their goals.” During her presentation, she stressed that as a scientist she strives for effective communication of her work both to reassure the public that the funding she received is used to advance science and also to publicize her work to a broader audience as the results will be beneficial to the whole public. She also emphasized the importance of diversity in recruitment of scientists; a picture of her lab team and her collaborators from across the world displays diversity in many ways. She was elected a 2020 fellow of the American Mathematical Society for her “contributions in research and outreach at the interface of topology and molecular biology, and for service to the mathematical community, in particular to underrepresented groups.” 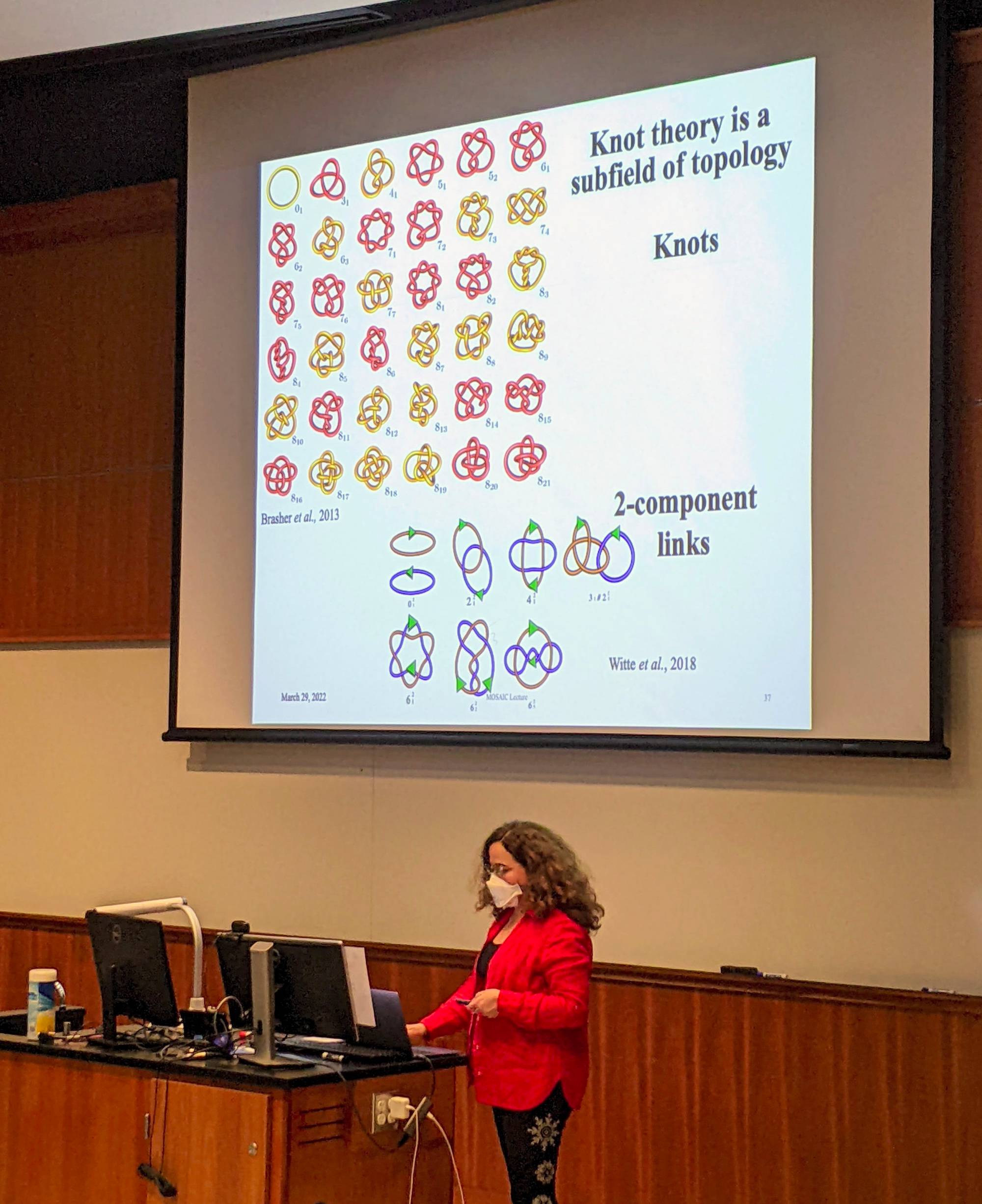 The rest of Professor Vazquez’ talk was focused on her research on DNA topology. She showed the audience the well-known double helix picture of the DNA and mentioned that the DNA is in fact squeezed tightly in a tangled form inside the cell. If we untangled the DNA and stretched the DNA in one cell, it would be 6 ft long. Naturally, the long DNA that is squeezed into that tiny space creates knots, which can be studied through knot theory and topology. Professor Vazquez showed pictures and animations describing how her team came up with the specifics of this entanglement process and what the implications are. To read more about how Professor Vazquez uses topology and knot theory to solve the DNA mysteries, see her piece in The Conversation.

After her talk, Professor Vazquez answered questions from many students about her research and graduate school. Bradley Monarch, a math major, mentioned how the talk helped him see the applications of mathematics to other disciplines: “Dr. Vasquez was able to shine some light on aspects of math I would have never thought of. The team that Dr. Vasquez does research with really demonstrates how important communication between disciplines is to a successful research project, which is something I hadn't thought of before. All the projects I have done have been with people in the same class, so working between disciplines was really cool to see!” 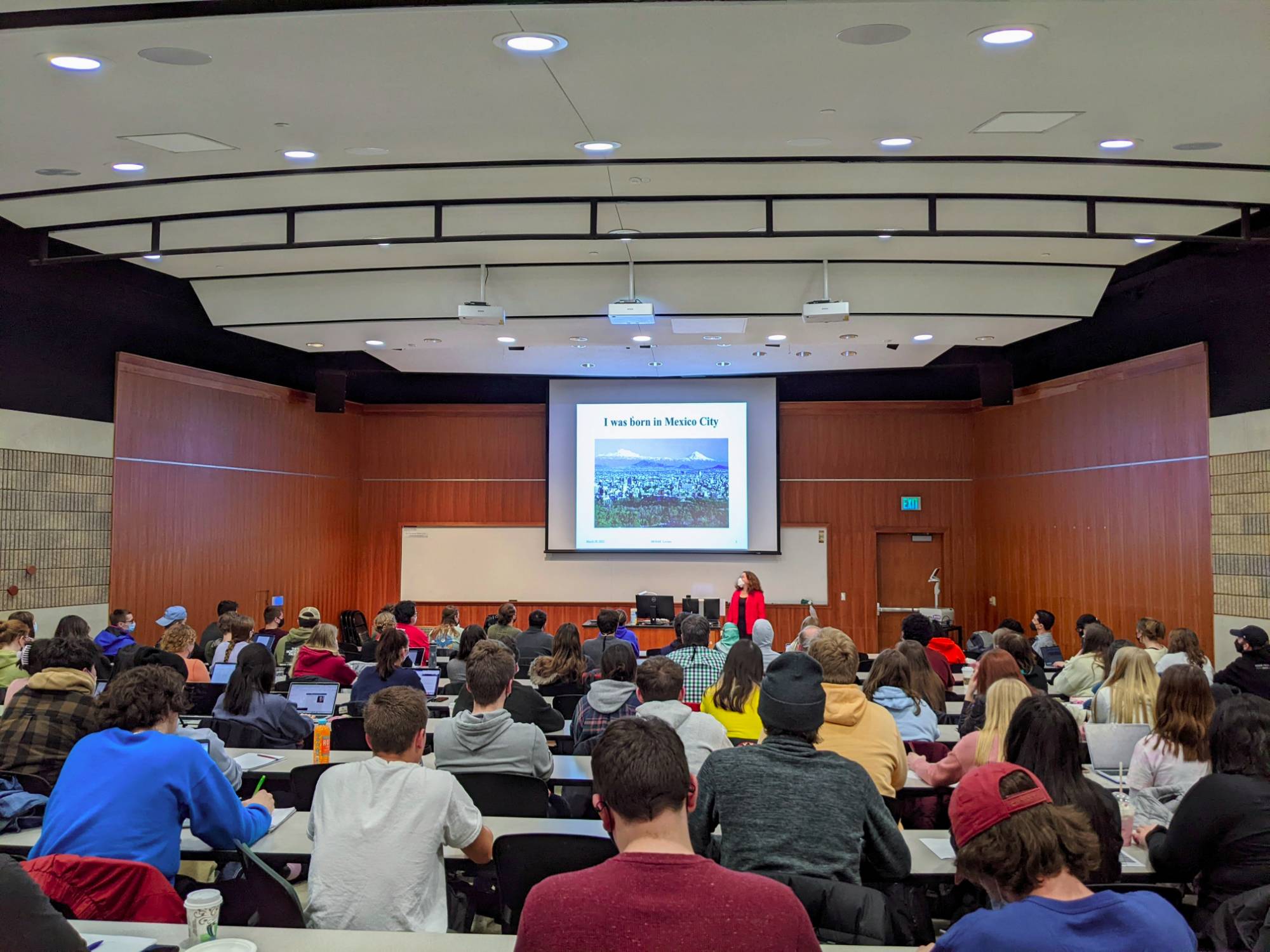 
Page last modified April 7, 2022
Report a problem with this page