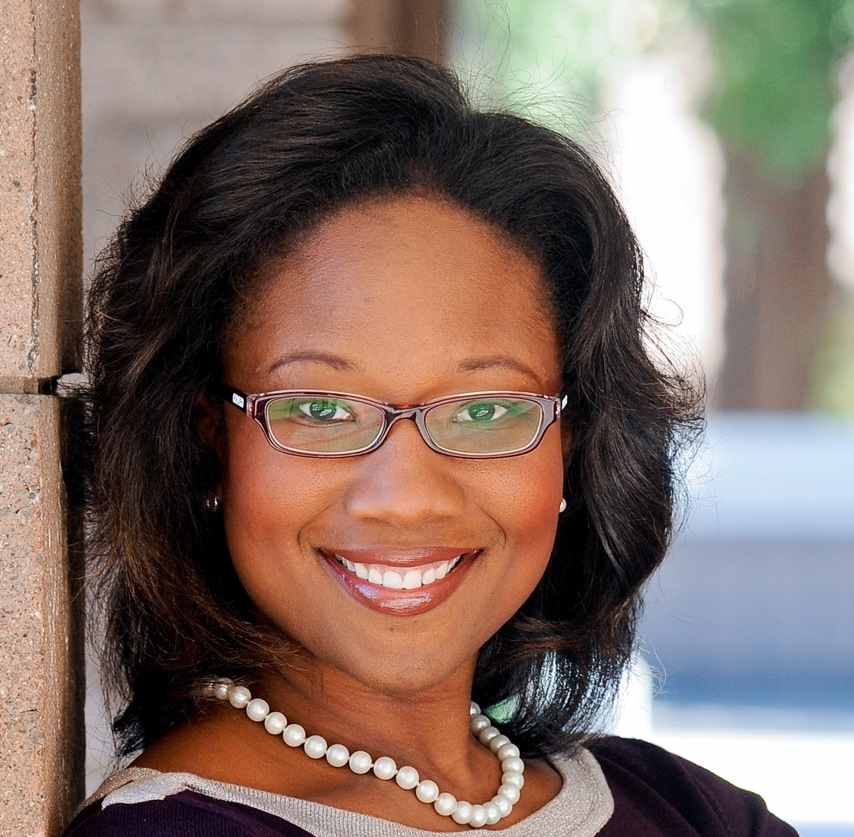 On Wednesday, March 30, Professor Talithia Williams of Harvey Mudd College gave a presentation on “Lies, Deceit, and Misrepresentation: The Distortion of Statistics in America.”  A full lecture hall of well over 100 GVSU students and faculty enjoyed her talk about how visual representations of data can be unintentionally or intentionally misleading.

Williams, an award-winning teacher and sought after speaker (see, for instance, her widely-viewed TED Talk, “Own Your Body’s Data”), holds a PhD in statistics from Rice University, along with a master’s degree in mathematics from Howard University and a bachelor’s in mathematics from Spelman College.  Her professional experiences include research appointments at the Jet Propulsion Laboratory (JPL), the National Security Agency (NSA), and NASA.  Dr. Williams develops statistical models that emphasize the spatial and temporal structure of data with environmental applications.  Her life’s work is to get people more excited about STEM (Science, Technology, Engineering, and Mathematics) education and to help change the mindset on STEM in general, and math in particular: she wants everyone to see that mathematics is a logical, productive career path that is crucial to the future of the country.

Dr. Williams first presented a wide range of information graphics that demonstrated a variety of false or misleading claims, showing that multiple news outlets do a poor job of presenting data, through either ignorance or deception.  Graphs are often mislabeled with missing or inappropriate scales that lead the human eye to make fast conclusions that are not, in fact, true.  We also learned that in advertising claims of effectiveness, cereal boxes may be the worst perpetrators.  In one example, Williams showed how a sweeping claim of  improved cholesterol levels was shown only to be true for a very limited population of people with major health concerns, and even for them it took several other major contributing factors beyond just eating Cheerios.  In addition, the clinical study that produced the claim of improvement was funded by General Mills, the company that manufactures Cheerios.  In another example, Frosted Mini Wheats were credited with a 20% improvement in students’ attention span; a close look at the fine print of the study showed that the comparison group was children who had eaten no breakfast whatsoever!

After demonstrating how poorly used or explained statistics can mislead, Prof. Williams moved on to share an important example of how valid statistical information can benefit society.  As a consultant to the World Health Organization (WHO), Williams and one of her undergraduate students investigated data on cataracts in several countries in Africa in an effort to better understand the prevalence and incidence of cataracts in developing nations, in part to help the WHO align resources with need.  “Prevalence” is a snapshot of the population that tells us who has had cataracts at some time in their life; “incidence” is a much harder concept to measure, one that reflects the rate at which new cases of cataracts occur and that would require multiple surveys to determine.  Dr. Williams and her colleagues built a model that enabled them to “work backwards” from prevalence data in an effort to create the inference rates.   In so doing, her work contributed to a better understanding of the needs that cataracts present in populations in several African countries.

Dr. Williams concluded her talk by discussing her passions: mentoring young mathematicians, doing STEM outreach, and spending time with her family.  She shared several examples of how she works with women and other underrepresented communities to encourage them to pursue careers in STEM, and particularly mathematics.  In an extended conversation with the audience, she told personal stories and examples of how important it is that we in mathematics be a welcoming community.  Particularly with young women and girls, Dr. Williams said it’s critical to teach them to “not be afraid to be smart” and highlighted how essential it is that we who teach mathematics say to students “You are good at this!” as a way to encourage them to study it more.

The Departments of Mathematics and Statistics thank Dr. Williams for her willingness to come and share with us her insights on a wide range of important issues and to contribute to our own efforts to get more students to study mathematics and statistics.


Page last modified April 7, 2016
Report a problem with this page