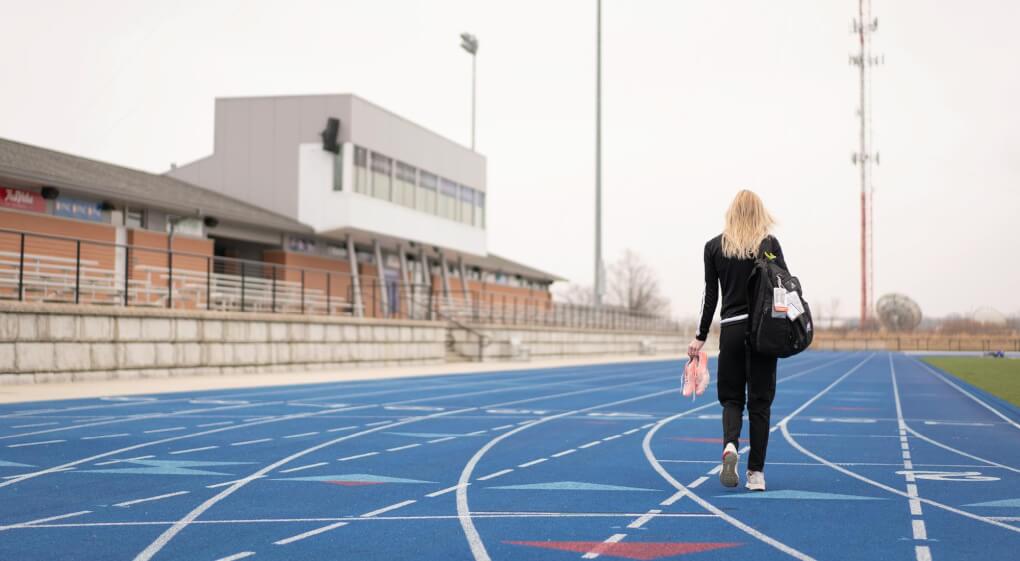 (Above) Sarah Beulla, a senior sprinter from Frankenmuth, walks on an empty track on the Allendale Campus. (Amanda Pitts)

When NCAA leaders in mid-March canceled all spring sports in response to the COVID-19 (coronavirus) pandemic, the empty courts, stadiums and fields created a feeling of emptiness for Laker coaches and student athletes.

Jerry Baltes, head coach for Laker men’s and women’s track and field, said he struggled with varied emotions as he and other coaches assisted student athletes. He said it was especially heartbreaking for seniors on his teams who practiced and competed throughout the winter for an outdoor track season that was cut short.

“For our staff and underclass athletes, there will be another season, so at least we have that to look forward to,” Baltes said. “For our seniors, this could be the end of their career for them.”

Some track and field athletes were in Birmingham, Alabama, preparing for the NCAA Division II Indoor Championships when they heard the March 13 meet was canceled.

Sarah Beulla, a senior sprinter from Frankenmuth, said she and other sprinters were in a van leaving the track after practice, headed back to the hotel.

“We were seeing things on social media that March Madness was canceled,” Beulla said. “Then coach (Reynaldo Radlin) told us and we were crying.”

Beulla said the lack of closure made it difficult to end a season and her own eligibility as a fifth-year senior.

“There is so much effort we put into competition and it makes our team really strong. Not being able to say goodbye to all of them was tough,” she said. 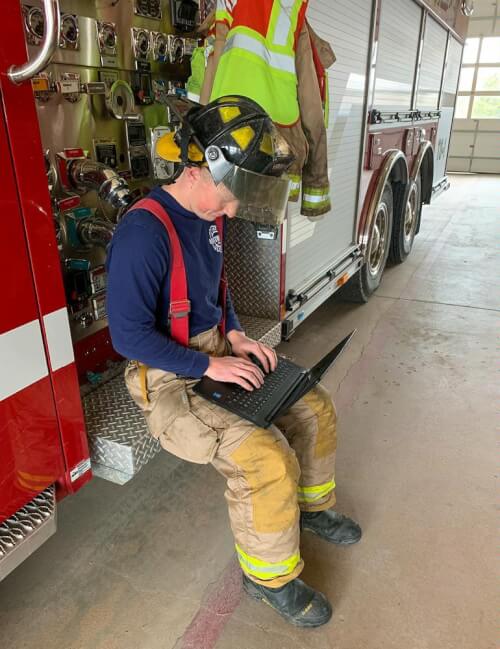 Blake Vershum, a junior catcher from Whitmore Lake, works on a laptop at a fire station where he is a first responder.

After spring sports were canceled, one student athlete returned to work as a firefighter/first responder.

Blake Vershum is a junior catcher for the Laker baseball team. Last year was Vershum’s first at Grand Valley after transferring from Schoolcraft Community College.

“Losing the spring season was a big shock to us, especially when we had such momentum after a great fall season,” said Vershum, who plans to earn a teaching degree to teach

physical education and coach. “Coach Detillion called us in for a meeting to tell us, it broke our hearts.”

When students were asked to return to their homes, Vershum did so and also picked up where he left off at the Northfield Township Fire Station in Whitemore Lake. He has worked for the department for three years, after earning firefighting and EMT licenses.

Vershum said there was a decrease in the number of emergency calls during the stay-at-home order, saying Whitmore Lake was a “ghost town.”

“There are fewer car accidents because nobody is on the roads,” he said, adding he and others wear personal protective equipment when responding to a possible COVID-19 emergency.

He said he does enjoy using the department’s weight room to help with off-season workouts.

The Laker women’s basketball team had earned an at-large bid in the NCAA Division II Midwest Tournament. With a 28-3 record and ranked No. 4, the Lakers were in Missouri and set to play familiar foe Ferris State March 13 when the brakes were put on to stop the season.

Jenn DeBoer, senior point guard, said she and other players first learned the tournament was canceled via a Tweet from the NCAA.

“I just broke down,” she said. “I never expected my senior year and my playing career to end like that.”

The bus ride from St. Louis back to Allendale was surreal, DeBoer said. And a few days later, team members and

the rest of Grand Valley’s students were sequestered at their homes to begin remote learning.

“I spent four years with this team. I’m going to miss everyone so much,” DeBoer said.

She looked forward to catching up with friends over the summer before her next adventure. DeBoer, who earned a bachelor’s degree in allied health sciences, is scheduled to start a master’s degree program at Bournemouth University in the United Kingdom, where she will also play basketball.

“I never got to do a study abroad program because of basketball, so I’m looking forward to this,” she said.