Paul Isely has become somewhat of an economics guru in West Michigan.

For nearly a decade, West Michigan employers have used his historically accurate economic findings to help guide their business decisions.

The survey is mailed to CEOs and business leaders from more than 1,000 organizations in the greater Grand Rapids area based on a representative sample. The sample reflects different sectors of the regional economy and the geographical diversity of the area.

When Isely talks, people listen. His predictions and research have expanded to include separate presentations to business leaders in Muskegon and Grand Haven.

The economics professor and associate dean in the Seidman College of Business shared his predictions for 2020 and how being a part of his high school marching band inadvertently directed him to a career in economics. 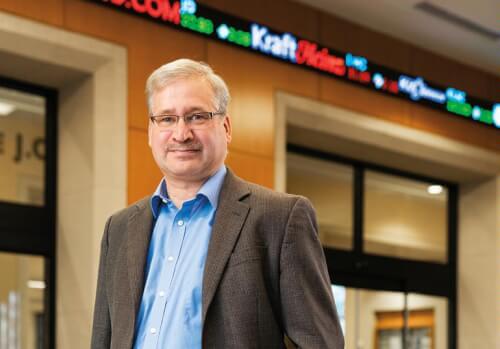 GVM: Let’s start with last year. You predicted an economic slowdown in West Michigan for 2019.

By the end of 2019, hourly wages increased by about 6 percent in West Michigan compared to 3 percent nationally and across the state. Wages are growing much faster here and that is consistent with what we predicted. That’s very fast growth. Wages are still low compared to other areas, but we’re catching up.

GVM: You also predicted a shallow recession for the end of 2019 and the beginning of 2020.

PI: In West Michigan and across the country, and particularly in the Midwest where there is a greater exposure to automotive, we saw a manufacturing recession. We said just a few sectors would be affected and we’re right on track for that.

Consumers are supporting the local economy right now. Their wages have been going up and that makes them a little more confident. They see friends switching jobs and they’re not worried about losing their jobs, so they spend more money.

PI: The West Michigan economy will continue to slow down. Business leaders are a little more pessimistic about this year than they were in 2019. They are worried about the presidential election. The dirty little secret is, there’s very little difference between a mainstream Democrat and a mainstream Republican when it comes to the growth of the economy.

But, there’s a big difference between a far-left progressive and a far-right populist, which is how everything seems to be setting up right now.

The good news about 2020 is we are working at full tilt and we’re seeing a greater group of people working. We’re seeing wages go up very quickly. The challenge is, the only way for us to grow in West Michigan is to convince businesses to move here. It’s hard because there isn’t the labor force for them to do it — there aren’t enough total workers nor are they skilled in the correct areas.

GVM: Let’s talk more about the effects the presidential election could have on the economy.

PI: Typically, presidential elections don’t have a big influence on the economy but the two sides now are so far apart. As we look at the first two years of the Trump presidency, red counties were growing faster than blue counties. This was a confidence issue. People in blue counties were depressed and unhappy and they changed their consumption and investment patterns to match that.

We hear several of the presidential candidates talking about radical ideas that could completely change the system. With something as big and as complicated as the U.S. economy — when you change something a lot, you’re going to have unintended effects.

GVM: What about employment in 2020 and people who are looking for jobs?

PI: Prior to the 1990s, when people lost their jobs during a recession, they got the same job back when the recession ended. Starting in the 1990s, that pattern changed. Jobs lost during a recession didn’t exist when it was over, and it took people longer to get back into the workforce. After the 2007-2009 recession, it took almost a decade to get everybody back to work.

Many economists believe the long tail on this one is going to be transactional jobs — people who take a transaction from A to B. Those jobs can be replaced by a computer. These people need to move up the knowledge chain and enhance their suite of skills, much like what President Mantella is talking about with the Laker Lifetime Learning Account.

GVM: How did playing in your high school marching band lead to a career in economics?

PI: It’s a silly story. I was in marching band in the ’80s. We practiced in the morning before school started and so did the football team. When we all finished, we had to wait in the library until class started. All of the newspapers with a sports section were taken by the football players. The only one left was the Wall Street Journal. So, I read it every day through high school.

When I got to college, I planned to study physics, and I did. I needed to take 12 credits of social science and I chose economics. It was really, really easy because of all that reading of the WSJ. So, I got a dual degree in physics and economics, and I chose to follow economics for graduate studies because at that time there weren’t a lot of academic jobs in physics.

GVM: How did you end up at Grand Valley?

PI: It was serendipitous. After completing my Ph.D. in economics at Purdue, I sent out hundreds of applications for economics positions and waited. After a few months, I received an email from Grand Valley asking if I was interested in a visiting position. That same email was sent to many people. Luckily, I happened to be sitting on the main frame in a computer lab at Purdue. I typed “yes” and hit reply. That’s the reason why I’m sitting here today. I was the first to hit reply. So, I came as a visiting professor in 1995 at age 27.