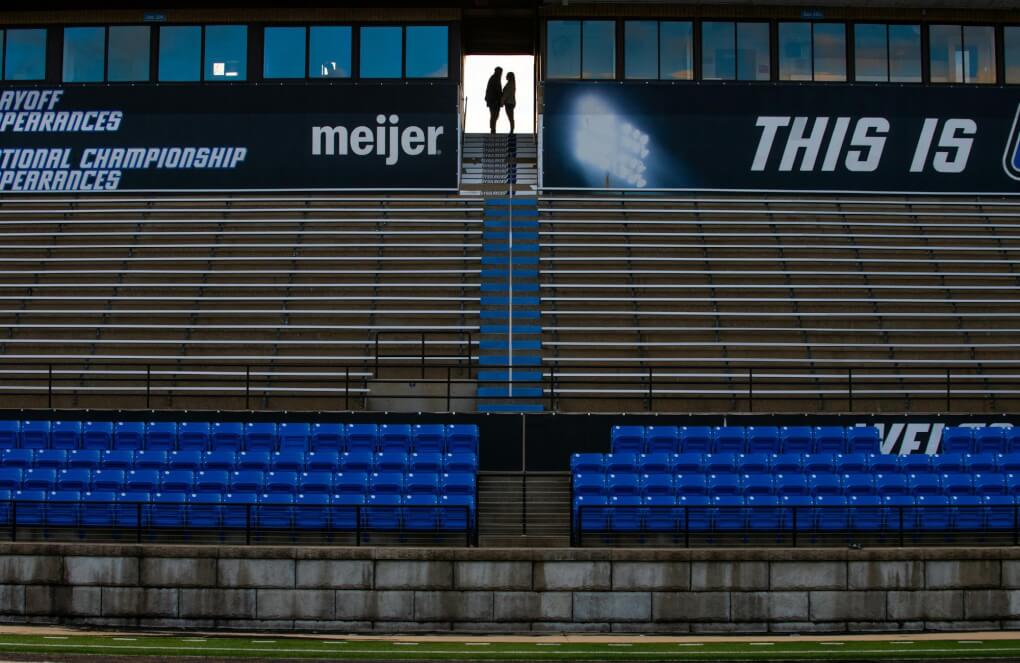 The dispatch room at the Grand Valley Police Department. A jewelry class. Mary Idema Pew Library. On the way to pick up mail at the Ravine Center.

For some, these locations are just places on Grand Valley’s campus. For four Laker couples, the locations mark where their love stories began.

The narratives of the following love stories are all different, but the setting is the same: Grand Valley.

Although they had different majors, the shared stress from final exams brought Caleigh and Sonny Haskins together in 2014. The couple met at the Mary Idema Pew Library during finals week.

It wasn’t until after they finished their exams that Caleigh agreed to a first date. In December 2014, Caleigh graduated and moved to Texas for a teaching job. Sonny had another year at Grand Valley to complete.

The following December, Caleigh bought a plane ticket home to watch Sonny graduate. However, Sonny was on the football team and the Lakers made it to the national semifinal game in West Virginia, and he would have to miss commencement.

Caleigh redirected her plane ticket from Grand Rapids to West Virginia. The Lakers lost by two points, but Caleigh was happy to be at the game and cheer on the team.

Not long after, football players who were unable to walk at commencement were given a special ceremony during halftime of a Laker basketball game.

Caleigh said Grand Valley has played a special part in their lives, including their wedding at the Cook-DeWitt Center last summer. The couple lives in the Grand Rapids area. 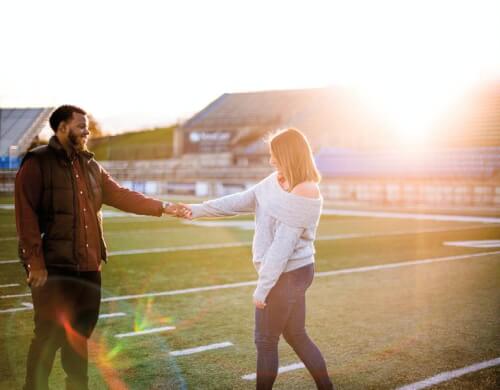 Meeting your future spouse at a police department might be strange to some, but it’s where the Laker Love Story of Jeff and Cristina Stoll began in 2004. Both were hired as student employees at GVPD.

Cristina was a student dispatcher and Jeff was hired as a student cadet. They both worked evenings, and sometimes they had overlapping schedules.

They soon became friends and over the next three years, their friendship transformed into Laker love.

They were married in 2009 and are approaching their 10-year wedding anniversary.

They both made their careers in public safety: Cristina has been working for nearly 12 years as a dispatcher at GRCC and Jeff is an assistant director of public safety and captain at GVPD. They have three sons and live near the Allendale Campus. 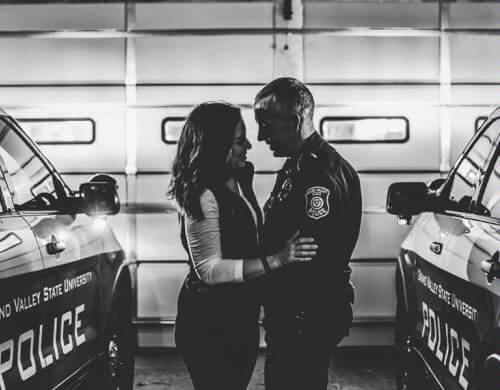 On a cold day in January 1984, Dennis and Jean crossed paths outside the Ravine Center. Jean was getting her mail and Dennis was heading to class. They smiled and said “Hello” to each other, but kept walking. Both turned to get a second glance, smiled again, and went their separate ways.

Their first “date” was when Dennis invited Jean to ride to the Shop Rite grocery store in Allendale with him. She turned him down at first because she had been to that store the day before. He asked her just to come along for the ride and she did. They began dating the summer of that year. As students, Dennis and Jean were involved in several activities and held various jobs on campus.

Dennis earned his degree in fall 1985 and Jean earned hers in 1986. At the time, one commencement was held per year, so they both participated the May 1986 ceremony. They were married that same year.

In 1992, Dennis became founder and senior pastor of Renaissance Church of God in Christ. Jean was a full-time mom and then worked in professional sales and education development before becoming executive director of their non-profit, AWAKE Inc.

The couple has three children and two grandchildren. They live in the Grand Rapids area and are active in the Alumni Association. In 2004, they established a scholarship in their names for two incoming first-year students. In 2010, Dennis was recognized as an Alumni of the Year by the Seidman College of Business. Most recently, Dennis and Jean participated and represented 1980s alumni in the investiture ceremony for President Philomena V. Mantella. 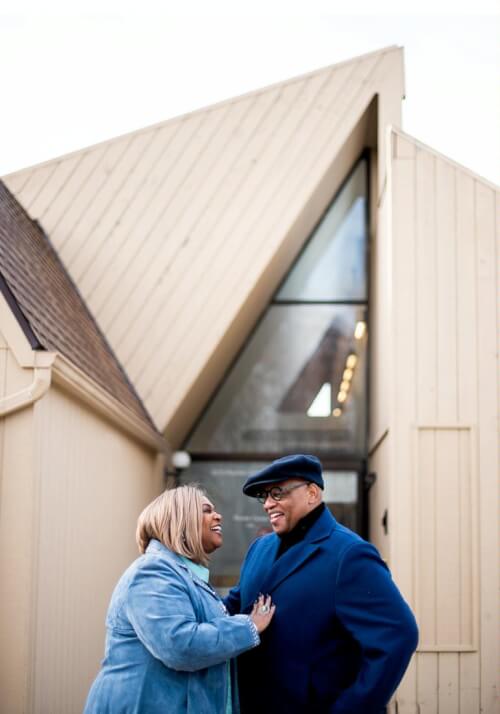 In the spring of 1974, Martha Zerfas was an art major enrolled in a jewelry class at Grand Valley. Her now-husband Paul Zerfas worked as a teacher’s assistant for the class. Paul was also in a class with Martha and her brother, but was afraid to ask her on a date because he mistakenly thought her brother was her boyfriend.

Eventually, the two began to date. That same semester, Martha graduated and accepted a position to teach art for Rockford Public Schools. Paul finished his degree and graduated the following year. The couple was married in the summer of 1975.

After teaching in Rockford, Martha spent time as a stay-at-home mom. She returned to teaching art for Grandville Public Schools before she retired in 2012.

They have a son, John, who works for Grand Valley, and one grandchild. Paul and Martha spend their retirement between their home in Ada and a cottage at Canadian Lakes. 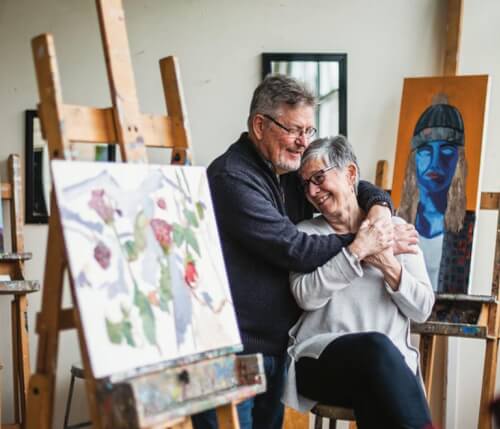 There's more Laker Love in the air. These alumni shared their love stories with Grand Valley Magazine on Facebook. 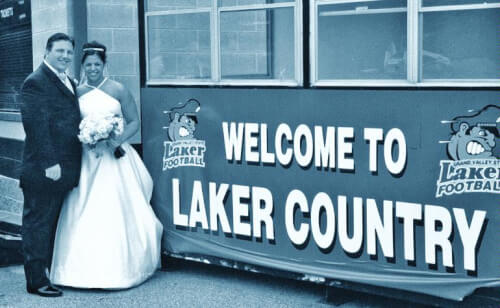 “Colleen and I met in December 2001. We were tailgating with separate groups of friends prior to the national semifinal game against Catawba. Fast forward, and GVSU wins that game to head to the championship game in Florence, Alabama. I get a van of people together, including Colleen and her boyfriend. When we get back after the crushing loss, we all go our own ways. Colleen and I ran into each other during homecoming in 2002 and eventually started dating. By April of 2003, I had bought the ring and we were married in July 2004.” (photo courtesy Silver Shutter Photography) 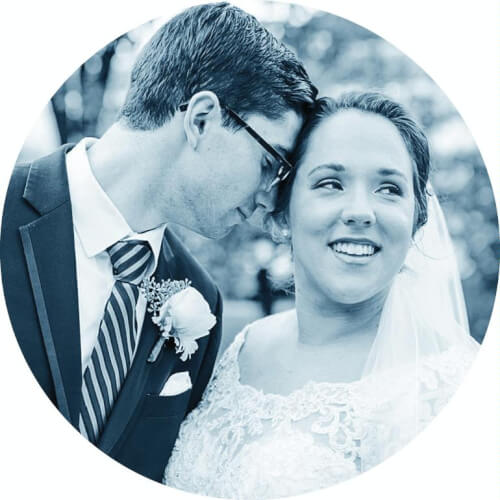 “My husband Caleb and I met in 2012 in a Russian 101 class at GVSU. We had different majors, his was film and mine was psychology, but we both had an interest in Russian language and culture. My interest stemmed from being adopted from Russia, and Caleb has distant roots from Russia as well. We were married October 2019.” (photo courtesy Ellen Kermeen Photography) 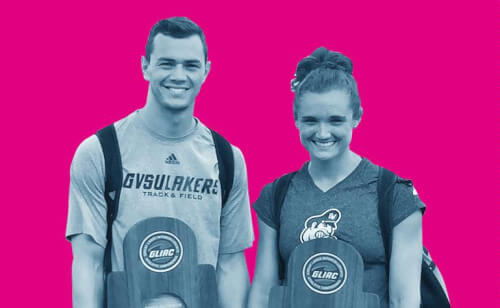 “Jesse and I met while running track at Grand Valley; both short sprinters. We started off friends and then realized it was something really special. We’ve been together since 2012 and finally tied the knot in June 2019 at a destination wedding in Mexico.” 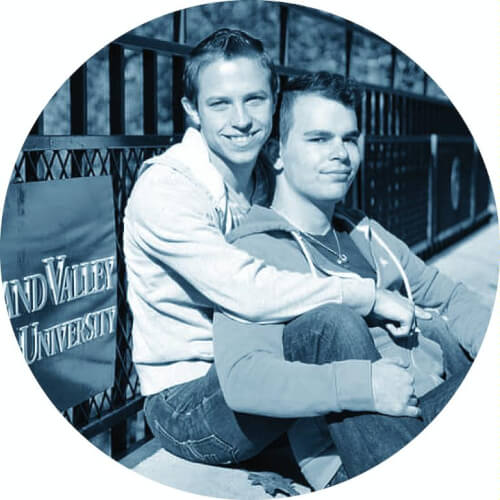 “Justin and I met on campus in September 2012. We learned the overlapping breaks in our schedules and spent most of our free time on campus together. When we began dating, we realized how much we complemented each other. I was the extrovert, often late because I had student organization meetings. Justin was the introvert, usually late because he was distracted with video games. We were married on May 6, 2017." (photo courtesy Alexa Sorensen) 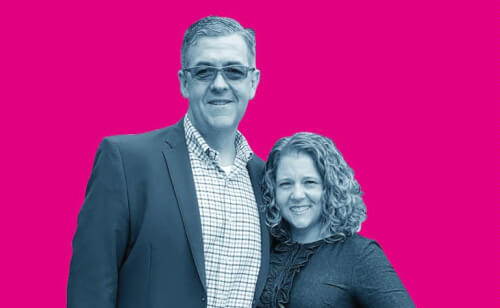 “I was taking GEO 111 and Warren was a Geology major. He promised to ‘tutor’ if I needed help. I didn’t ‘need’ a tutor, but I enjoyed his company and before long, we were dating. We married in 1994 and 25 years later it all came full circle when we dropped our son off for his first year at GVSU last August." 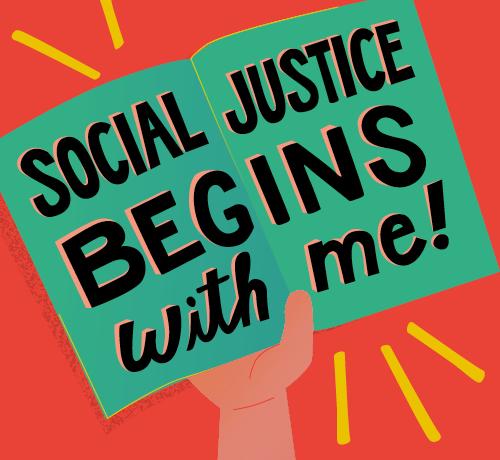 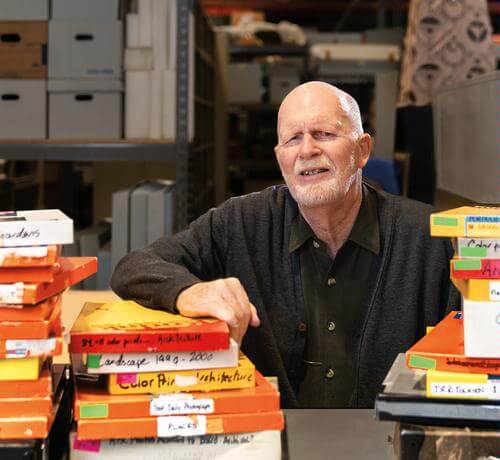 Douglas Gilbert is a retired photographer who gifted his entire collection, including rare photos of a young Bob Dylan, to Grand Valley's Art Gallery. 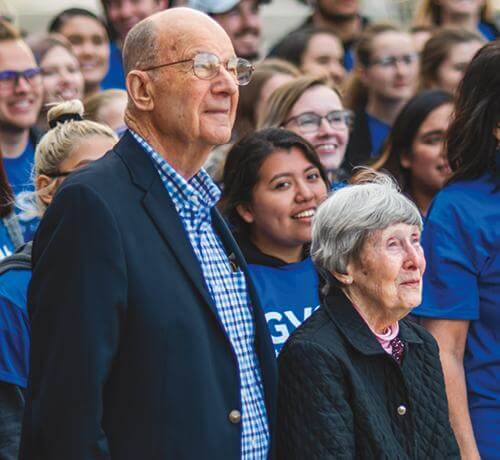 Detroiters Bob and Ellen Thompson established the university's largest scholarship program; it is focused on opening access to education for students from working families.