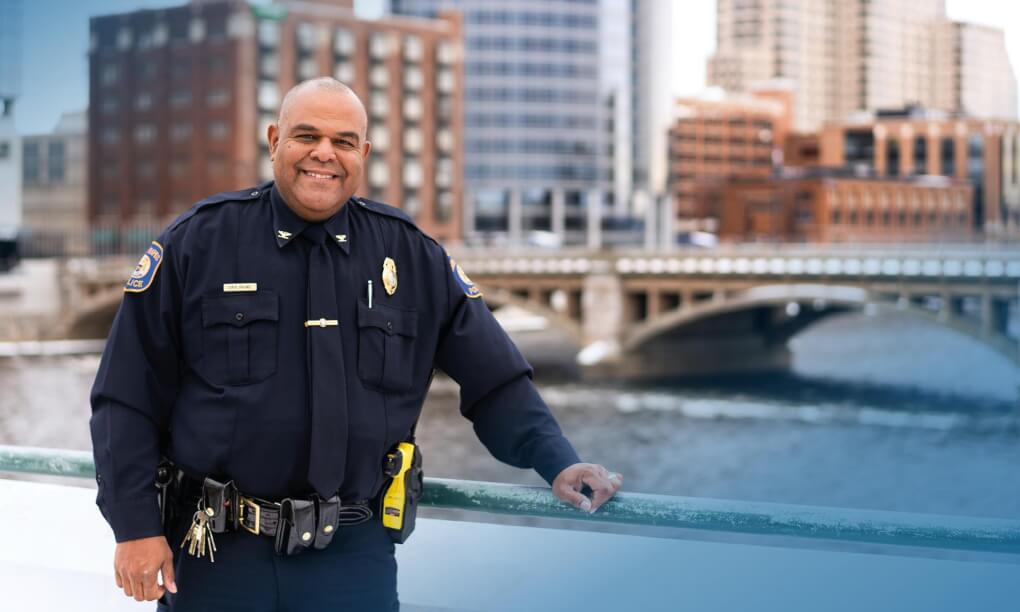 Eric Payne had a series of influencers in his life before that term was trendy.

Payne ’86 is chief of police for the Grand Rapids Police Department. He was sworn-in as the city’s first African American police chief in late July after a national search for the position. Payne has worked for GRPD for more than 32 years, beginning as an officer and progressing into departmental leadership roles.

Had it not been for those influencers, Payne might have taken a different career path. When he arrived at Grand Valley, Payne considered education as a major and said he knew only that he “wanted to go into public service.” He also played one year of football for the Lakers when Jim Harkema was the head coach.

His career path was first interrupted by a conversation with an African American campus police officer when Payne was a first-year student working in the Fieldhouse.

“I was working my job, and I still remember I was right at the entrance, and he and I just talked,” Payne said. “I had questions for him and our conversation was imprinted on me. I had never really talked to anyone in uniform and that just stayed in the back of my mind.”

The young officer was Larry Johnson, now the assistant superintendent for Grand Rapids Public Schools who oversees public safety for the district. Johnson and Payne worked together at GRPD for about a decade.

Johnson, who graduated from Grand Valley in 1982, said he and Payne have remained close friends and refer to themselves as “the two chiefs.”

At the start of Payne’s sophomore year, his roommate convinced him to take an introductory criminal justice course. The law enforcement content melded well with Payne’s interest in the Constitution and he said he was hooked. Other conversations with criminal justice professor Jimmy Walker (now deceased) and former department chair Jonathan White solidified his decision. “I remember going up to White and saying, ‘I want to be a cop,’” Payne said. “He laughed and said, ‘Well, sit down,’ and that’s how it started.”

After graduating from the Grand Valley Police Academy in 1986, Payne was hired to work on campus by former Grand Valley police chief Allen Wygant. After six months on the job, he was recruited to apply for a position at GRPD. Wygant said Payne was well-suited for the city’s police force.

“Eric has always been very intentional with the individuals he interacts with,” said Wygant, who retired from GVPD in 2003. “He handles himself with dignity and has respect for other people, who then respect him. GRPD took advantage of the skills he has over the years by promoting him within the ranks.”

“He understands the issues Grand Rapids is facing. He’s an excellent individual and a friend. I have high expectations of what he will be able to accomplish.”

Payne joined GRPD as a patrol officer. He has worked for the department’s vice team (with Johnson), major case team, patrol watch commander then commander of the south service district. Over three decades, he has witnessed a shift in law enforcement from reactionary to community policing.

“It used to be you called 911, police officers would show up and we’d be done with it,” he said. “We have found you can’t arrest yourself out of problems. Community policing takes a holistic approach to problems that exist in communities. It’s building and collaborating with other city departments and building those relationships in the community.”

Trust lies at the heart of relationship building, Payne said. He was a sergeant assigned to the city’s southeast side during the start of the department’s community policing efforts and said he began building relationships with residents, business owners and other officers assigned to that service district.

“It’s really amazing I have relationships from when I started back as an officer and, over the years, they have continued and blossomed,” he said.

His decision to enter the police chief search came after discussions with colleagues, friends and family. Payne’s wife, Jessica, worked as a sergeant for about 12 years before leaving GRPD; they have two children.

“In law enforcement, your family doesn’t see what goes on day-to-day but they are impacted by it. I had to have their blessing to pursue the chief’s position,” he said.

The significance of being the first African American police chief is not lost on Payne. He said he serves the entire city and will make a concerted effort to ease any tensions between the police force and African Americans in Grand Rapids.

“Trying to bridge that gap is a focus of mine because I understand and I appreciate the strain that has historically existed between law enforcement and the Black community. It goes further with the Latino community,” Payne said. “I am a marginalized person in society so I’m very conscious of those relationships.”