About the College of Education and Community Innovation

The College of Education and Community Innovation (CECI) is the first academic college in the nation to unite the transformative power of education, social work, criminology, philanthropy, and legal studies with the community engagement of hospitality, health, nonprofit, and public management and policy.  We are dedicated to developing well-rounded and high-quality administrators, educators, social workers, paralegals, peace officers, counselors, community organizers, and civil servants through active, experiential and community-based learning. Our multidisciplinary environment will incubate innovative approaches to building healthy communities, promoting equity and social responsibility, and providing quality research and data.

Ceci and CECI have some things in common: 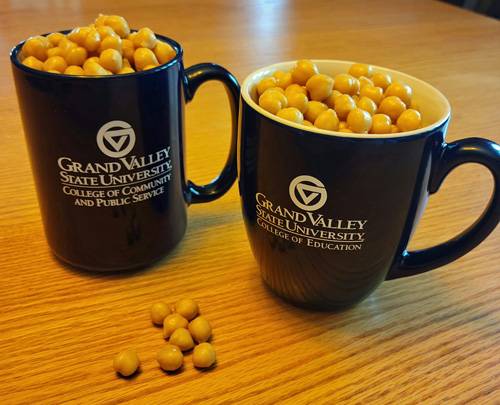 1967 The Teacher Preparation Program began. Grand Valley’s education program was developed around the idea that teachers learn by observing and doing and there should not be too many methods courses (a characterization of most education programs of the time).

1968 Grand Valley received approval from the state to recommend teachers for certification.

1969 The Teacher Education Center was formed within the College of Arts & Sciences (CAS). A total of 97 prospective elementary teachers and 77 secondary teachers enrolled.

1970s logo of the College of Arts and Sciences

1971 The Educational Studies Institute was established as a teacher preparatory program.

1971 A summer program was started for students with cognitively impairments.

1972 The School of Public Service was established within College of Arts and Sciences, offering a new major in public service.

1974 Grand Valley became the first school in the country to offer full police academy training to people who were not already employed by police departments. 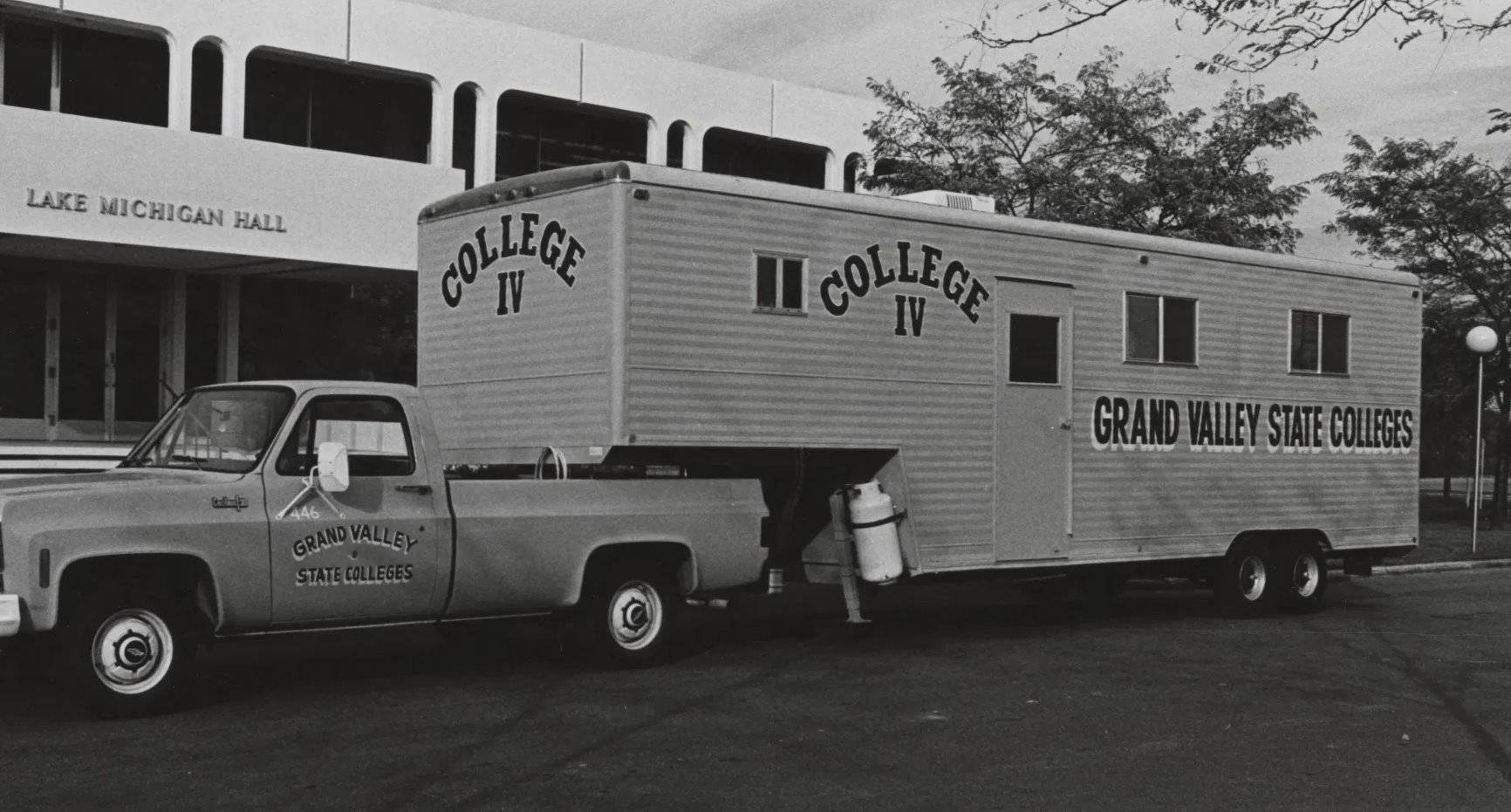 1977 College IV established a tourism major, described as a “Program in Food and Resort Management.” The program began with one full-time faculty, one adjunct faculty, and seven majors. (One of Grand Valley’s original colleges, College IV arranged for instruction to be delivered via “auto-instructional learning modules” with no traditional classroom settings. Faculty were expected to be available throughout the day to work with students and answer questions.)

1978 The graduate program in public administration (MPA) was developed in the Seidman College of Business.  The original MPA curriculum was designed to emphasize behavioral management studies rather than administration, policy or quantitative research in the public sector.

1979 School of Public Service in the College of Arts and Sciences began an undergraduate major in legal administration (LA). 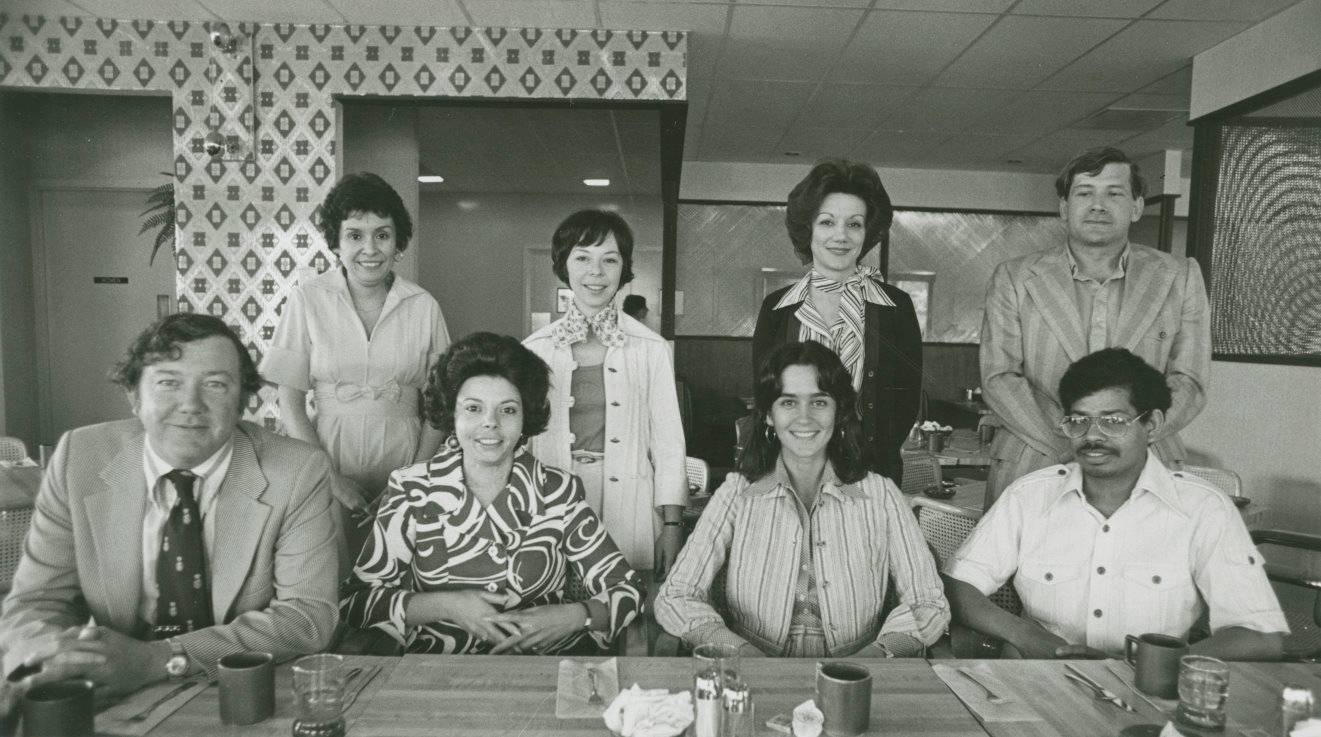 1980 The Educational Studies Institute becomes the School of Education, still within the College of Arts and Sciences.

1980 The graduate program in Social Work was established.

1981 The undergraduate public service program was moved from the College of Arts & Sciences to the Seidman College of Business and was rebranded as public administration (PA).

1983 Grand Valley’s academic programs were reorganized into a divisional structure. HTM and its single faculty member joined the new Division of Science & Math. Legal administration and criminal justice programs were reorganized into the School of Social Thought and Public Affairs (STPA) within the new Division of Social Sciences. Both the undergraduate and graduate programs in public administration were moved from the Seidman College of Business into STPA. (Political Science, Sociology, and Anthropology also were part of STPA). 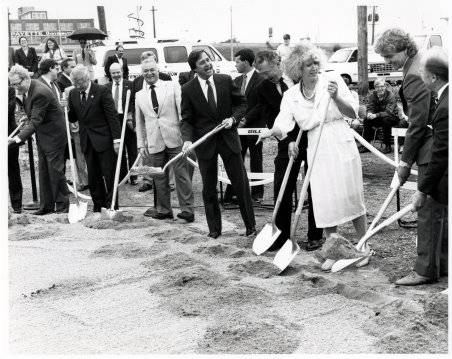 1984 The Michigan legislature awarded funding to develop architectural plans for what would become Eberhard Center, Grand Valley's first building in downtown Grand Rapids. Land was acquired and buildings demolished to prepare for construction.

1987 The School of Education earned accreditation from NCATE (National Council for the Accreditation of Teacher Education).

1988 The Grand Rapids Center (later named Eberhard Center) was dedicated. Education, Social Work and Public Administration courses were among those on the initial schedule for the new 42-classroom facility.

1990 Social Thought and Public Affairs was broken into several units, creating The School of Criminal Justice (SCJ), which included the criminal justice program, legal studies program, and West Michigan Regional Criminal Justice Training Center, and the School of Public Administration (SPA). They remained in the Division of Social Science with the School of Education, School of Social Work, and the departments of Sociology/Anthropology, Political Science and Psychology.

1990 The Bachelor of Social Work was accredited by the Council on Social Work Education (CSWE). 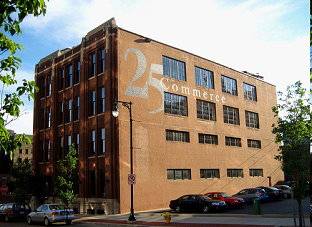 In the 1990s, 25 Commerce housed Social Work, Criminal Justice, Public Administration, and the Center for Philanthropy.

1992 (through 1995) HTM sponsored an annual Pasta Fest, which offered pasta samples from local restaurants, to raise awareness of the HTM program and build industry partnerships.

1992 The first Social Work School in Albania – the Faculty of Social Work at the University of Tirana  – was founded with the support of Grand Valley's School of Social Work, Bethany Social Services, and the George Soros Foundation. Grand Valley's SSW assisted with the organization and staffing. Afterward, faculty and administrators from Tirana visited
GVSU for intensive training and consultation in social work.

1993 The School of Education and the School of Social Work separated from the Division of Social Science and become autonomous academic units of the University.

1995 GVSU Literacy Center was established. This summer program matched Grand Valley graduate students with students in the Godfrey-Lee Public Schools for tutoring in reading and writing. 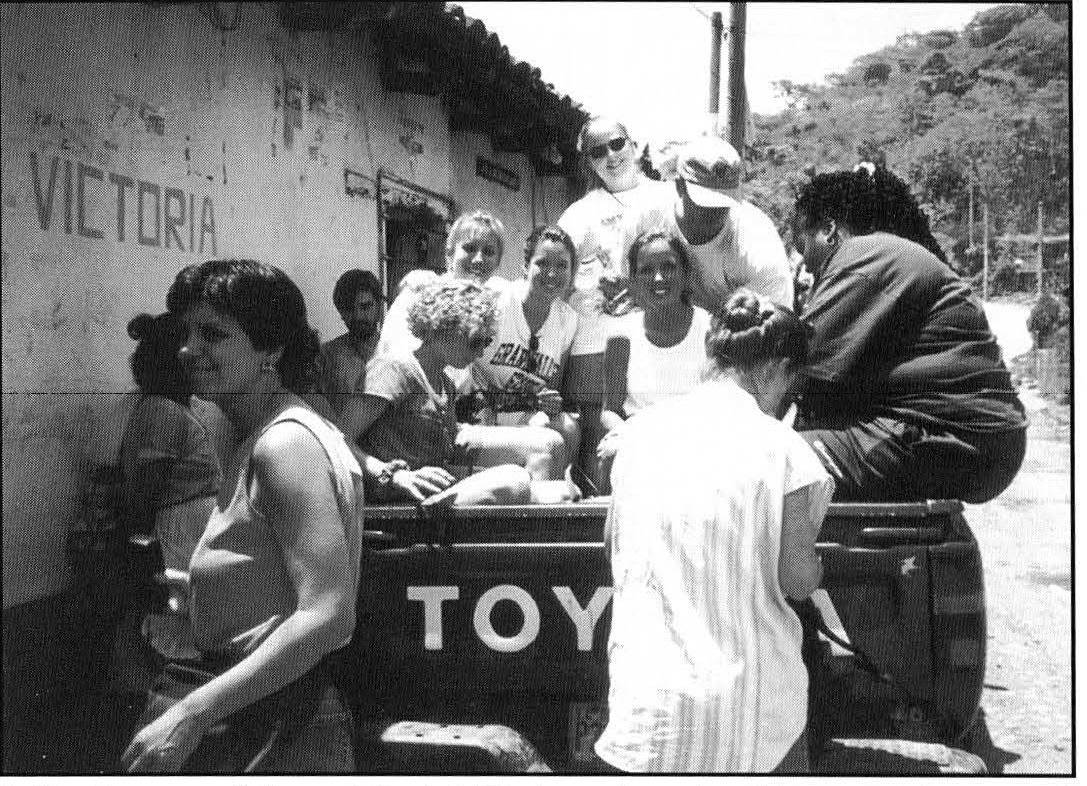 In 1997, Julie Guevara, left, and Social Work students load into a pick-up truck for their trek into the El Salvador mountains

1997 SPA was renamed the School of Public & Nonprofit Administration (SPNA).

2002 The Community Outreach Office (later called the Center for Educational Partnerships) was created to facilitate partnerships between GVSU’s education programs and the local community.

2002 The Department of Hospitality and Tourism Management (HTM) moved into the new Mackinac Hall addition. 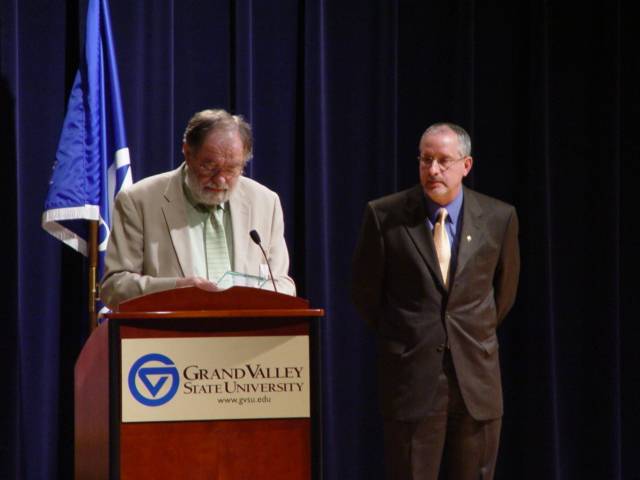 Rod Mulder, Dean of CCPS (left) and Dan Balfour, Director of the School of Public and Nonprofit Administration, in 2005.

2004 A university reorganization divides the university into eight professional colleges, including the College of Education (COE) and College of Community and Public Service (CCPS). The COE was the renamed School of Education. CCPS was formed by absorbing the School of Criminal Justice, School of Public & Nonprofit Administration, and The Johnson Center from the Division of Social Science, The Department of HTM from the Division of Math & Science, and the formerly autonomous School of Social Work.

2004 The SPNA Review was launched as a forum for its best student scholarship in public and nonprofit administration. 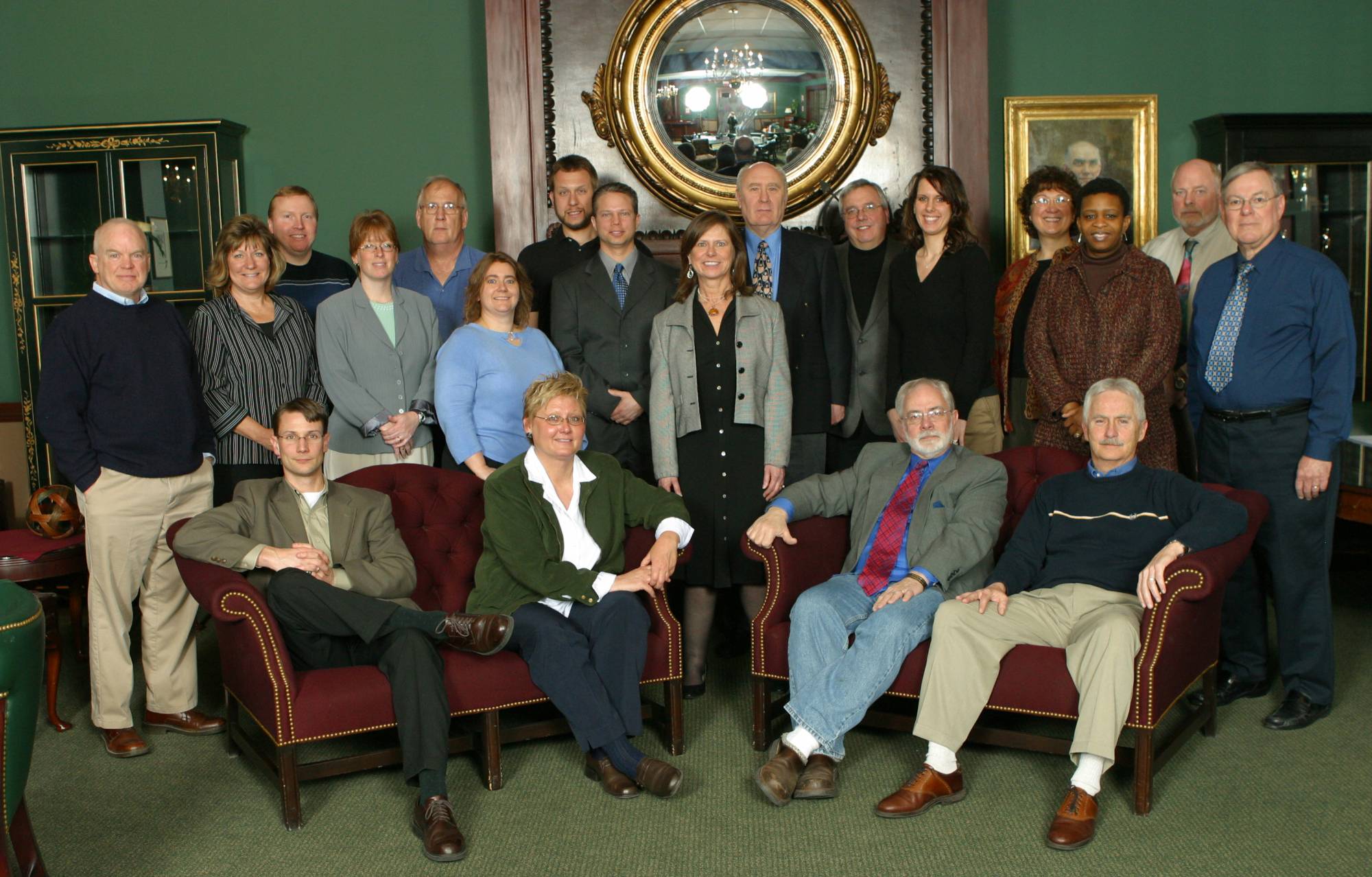 School of Criminal Justice faculty and staff in 2005.

2005 School of Public & Nonprofit Administration began its partnership with the Cracow University of Economics (CUE). In the next fifteen years, 25 graduates of CUE earned an MPA at GVSU.

2008 GVSU's Meadows Club House became the host for some HTM classes. A portion of the Clubhouse converted to a classroom for lectures and the dining area, bar area, and kitchen were used as laboratories. 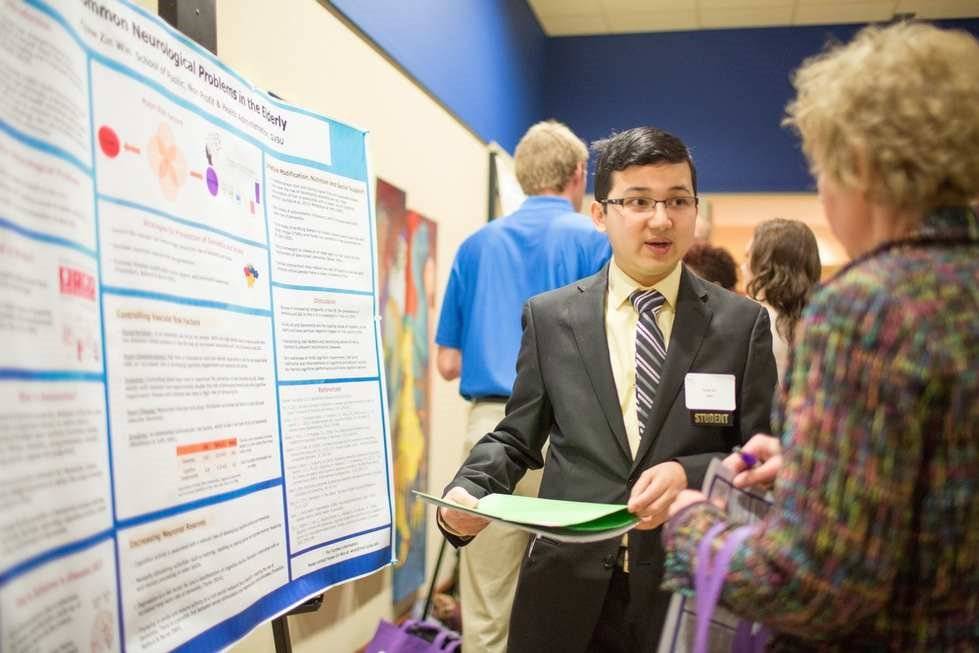 2010 The Frey Foundation Chair for Family Philanthropy was established at the Johnson Center.

2010 The School of Criminal Justice partnered with the School of Computing and Information Systems to launch a minor in information security systems.

2011 The School of Criminal Justice began offering a minor in juvenile justice. 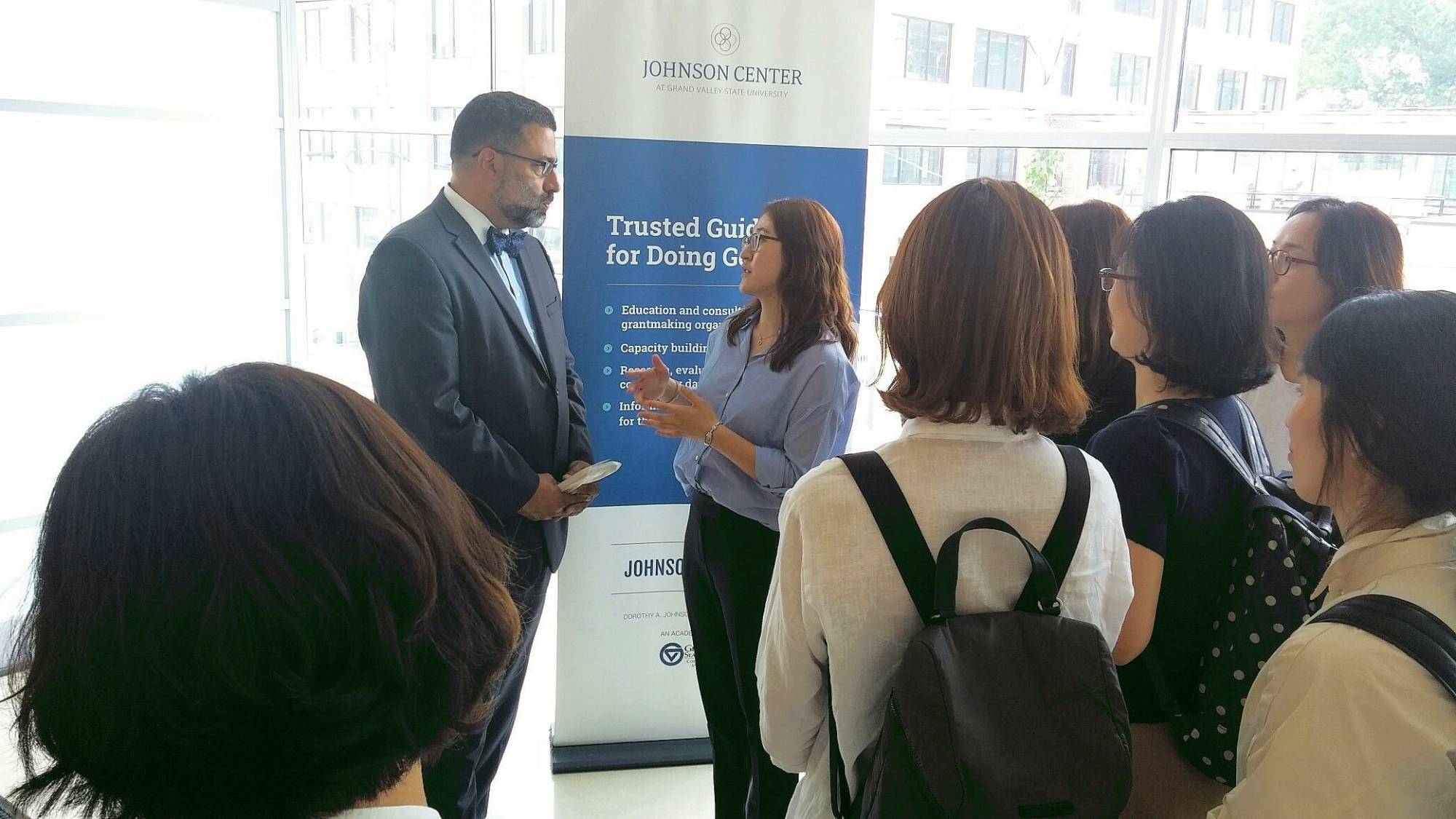 Kyle Caldwell, executive director of the Johnson Center with a delegation from South Korea's Beautiful Foundation in 2016.

2013 The College of Education moved into the Richard M.DeVos Center, with departments on the 4th and 3rd floors.

2013 HTM moved from Mackinac Hall on the Allendale campus to Richard M.DeVos Center on the Downtown Campus.

2015 The School of Social Work faculty and students planned and hosted a Teach-In entitled: “Social Work in the 21st Century: Does Race Matter?” This event was attended by over 600 students, faculty, and community members. 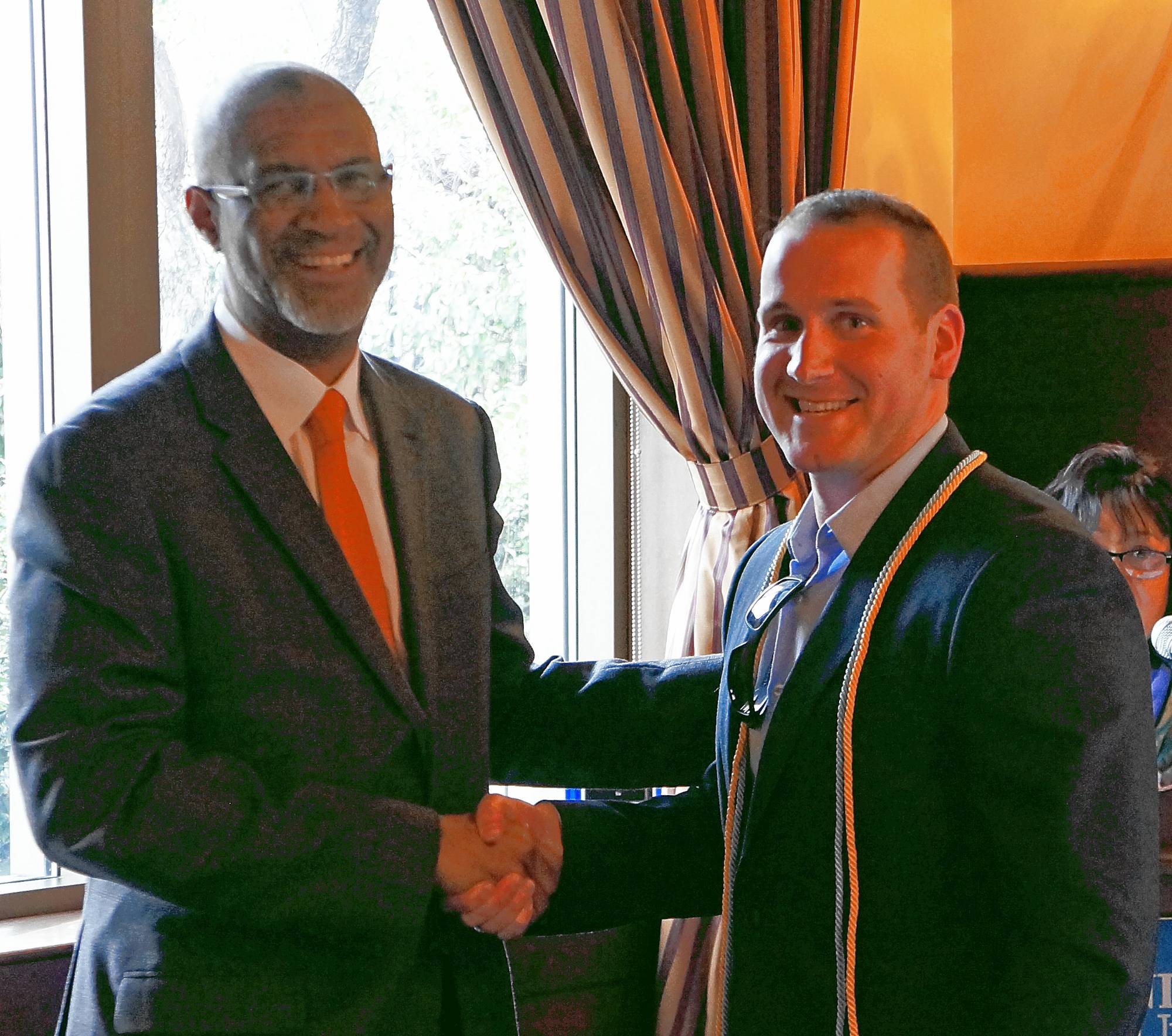 2017 The Johnson Center and School of Public, Nonprofit and Health Administration hosted the annual ARNOVA conference, with close to 1,000 participants from all over the world.

2019 The W.K. Kellogg Foundation announced a $15.5 million grant over five years in partnership with Grand Valley State University for the Battle Creek community

2020 The Master of Health Administration received accreditation from the Commission on Accreditation of Healthcare Management Education (CAHME).


Page last modified August 3, 2021
Report a problem with this page