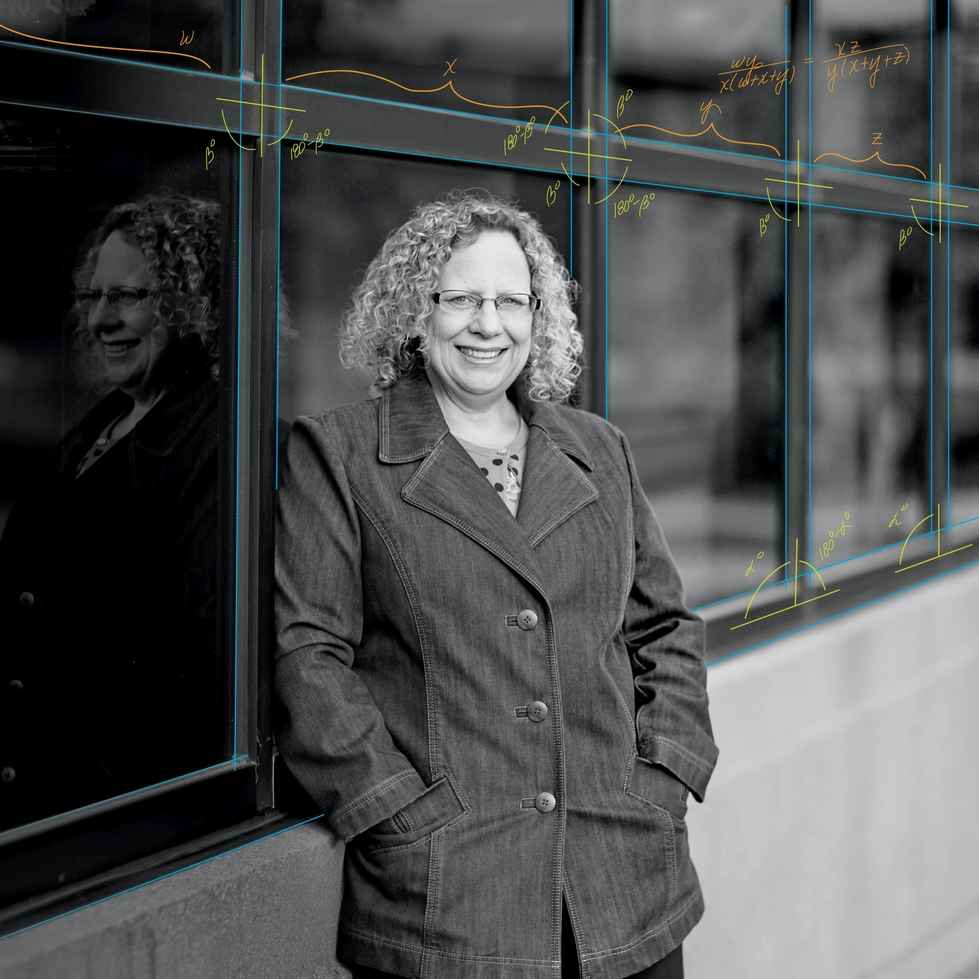 When Karen Novotny interviewed at Grand Valley in 1988, as she drove north along 48th Avenue, all she could see were farms and cornfields.  Even after turning into campus along West Campus Drive, what is now the Meadows Golf Course was yet another cornfield!  Of course, the surroundings of the university have changed since then, and so has the mathematics department itself.

What hasn’t changed is the department’s focus on outstanding teaching and Karen’s contributions to that mission.  From the moment she saw the position advertisement, she appreciated that teaching was emphasized as the most important aspect of the job.  Although she liked research and had already published papers when she was finishing her Ph.D., teaching mathematics was, and continues to be, her passion.  Her favorite part of teaching has always been interacting with students, sharing their mutual passion for mathematics.   Karen says, “I love it when students first investigate some of the ‘mind-blowing’ ideas they've never encountered before (like non-Euclidean geometry or the uncountability of the irrational numbers) and I see their excitement.”

Karen is also known for how she works to get to know her students, including their hopes and aspirations for life after GVSU.  She strives to motivate her students to reach their full potential and expand their perceptions of what’s possible for them after her class.   Karen shares that her own life experience has shaped her own approach with students: “One of my undergraduate professors at WMU literally changed the course of my life by encouraging me to get a graduate degree in mathematics. I was a first generation, non-traditional college student and didn't even know at that time that there was more than one type of college degree, so getting a Ph.D. in Mathematics definitely wasn't in my original plan! Because he cared about me – the student of mathematics, the individual, and the single mother – he made a profound impact upon my life and pointed me toward this career that I love.”

Since becoming department chair in spring 2016, Karen has been working hard to lead improvements to our programs in order to better prepare our students for their chosen careers after graduation and to involve more students in high impact learning experiences.  In that role, she has facilitated our department's involvement in the Engaged Department Initiative, appointed Dr. Feryal Alayont as the first Mathematics Advising and Engagement Coordinator, and initiated a task force to help the department think about how it recruits and retains majors.

Furthermore, as discussed in the Grand Valley Magazine, Karen actively endeavors to promote mathematics, improve students’ views of the subject, and help others see how mathematics opens doors to prosperous careers.  She reports that “It’s been extremely enjoyable to begin generating ideas with some of my colleagues about how we can introduce all GVSU students to the true nature of mathematics and, therefore, contribute toward their true liberal arts education promised by GVSU.”

Karen has an abiding fondness and appreciation for our students.  She states, “It’s not easy to earn a degree in mathematics from our department because we challenge our students to think critically, communicate effectively, and be precise. But over the years, our majors have thrived in this environment and grown so much as mathematicians and in other ways.  When I run into former students outside of GVSU or when they come back as our Alumni in Residence, they always have good things to say about their mathematics courses, and I learn that they've accomplished a great deal after graduation.”  As an example, you may read about Michelle Fox in the current issue of the Gazette.

When asked “What's something about you personally that your students or colleagues might not know?”, Karen shares that she’s normally very open with students because she had such a unique path to her career: “I want students to know that if I could become a mathematics professor and now the first female chair of the department that they should dream big and not limit their possibilities.”  And yet, some students and colleagues may not know that she lived in Alaska as a child (and Alaska was the place she lived the longest in her years of growing up as an Air Force brat), nor that Karen was a member of the state championship medley relay team in swimming, where she swam the lead-off backstroke leg.  As a result, she participated in the Junior Olympics in swimming and still has the certificate that verifies this fact!

Karen appreciates GVSU for many reasons, including the fact that she hasn’t had to move during her career, thus providing geographic and educational stability for herself and her family.  The department and university are grateful for Karen’s longstanding service to Grand Valley, and now for her work in this new role as department chair.


Page last modified July 3, 2018
Report a problem with this page