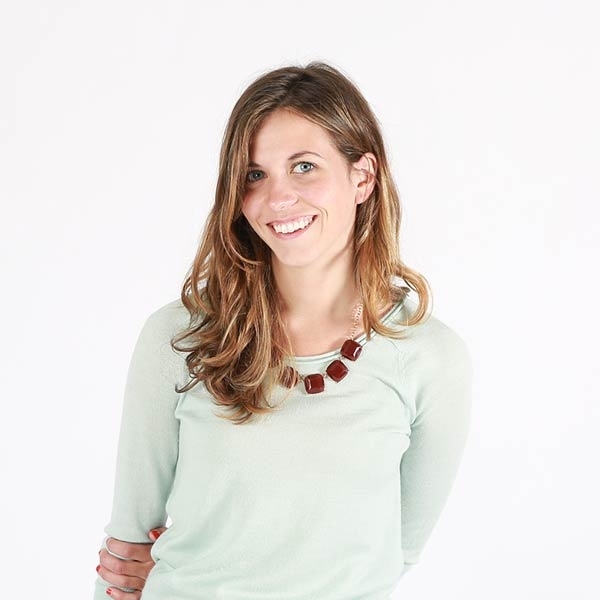 Since graduating from GVSU with a mathematics major in 2014, Michelle Fox has embarked on what she hopes will be a versatile career in web development.  Now a front-end engineer and lead developer of the website rebrand for Poll Everywhere, a software company whose product allows presenters to engage their audiences in real time, Michelle lives and works in San Francisco.

Prior to her start at Grand Valley in Fall 2010, Michelle attended Almont High School in Almont, MI. There she developed a strong interest in mathematics and was a part of the math competition team at her high school; one of her teachers was Nathan Immekus, himself a GVSU mathematics alumnus (‘04).  Michelle thought that she wanted to go into math education or engineering, but hadn’t decided which.  She chose to attend GVSU because there were so many program options and she was still somewhat undecided.

Michelle shares that one of the best aspects of her Grand Valley student experience was how small the math department felt and how small almost all of her classes were, both in mathematics and across the university.  Because of the friendly, personal atmosphere, she was able to get to know her classmates and professors and felt comfortable asking questions and getting involved.  Michelle especially enjoyed working as a tutor in the Math Center.

Sometimes mathematics majors are a bit nervous about what awaits after graduation, since they may feel like they aren’t being trained for a particular career.  But Michelle says, “The most appealing part of majoring in mathematics was the diversity in job options I would have after graduating. My senior year I was still unsure of what exactly I wanted to do, but I knew that the problem solving skills I gained with the math major would set me up to learn quickly and be versatile.”

Poll Everywhere is a live polling software that allows for audience interaction via mobile phone at events and conferences or in classrooms. The software is a replacement for “clicker systems,” which do not rely on internet technology. She was initially referred to her position at Poll Everywhere by a friend who worked at the company; even though she had no production development experience, they hired her anyway.  Since then, she’s grown into a front-end engineer position and is now the lead developer on a full website rebrand. Michelle has also had the opportunity to be the project manager of the rebranding project, and thus she organizes all of the launch dates and to-dos for the involved engineers, designers, and copywriters. A typical day for her involves writing HTML/CSS/Javascript to create live versions of mocks provided by graphic designers and then also working in SQL to analyze the performance of the work that her team is doing.

Michelle reports that San Francisco is an appealing city for anyone who has interests in the technology industry or software engineering. It’s an especially great location for a math major because there are many routes you can pursue.  She knows data scientists, engineers (front end and back end), analysts, and designers who all studied math and find that their mathematics background helps them in their day to day work.

When asked what she likes about her current job, Michelle says, “I enjoy all aspects of creating websites (coding, design, marketing, analysis) and want to continue to work in roles that allow me to try my hand at all of them.  Gaining skills in web development also allows for a wide range of freelancing opportunities. It’s fun to be able to offer my skills on any projects that I hear about and am interested in.”

Finally, we asked Michelle what advice she would give to students who enjoy mathematics but aren't sure what career they might pursue with it.  “Mathematics is a great degree to have if you aren’t sure what career you want to pursue. For me, there hasn’t been a need to pigeonhole myself into one specific position. Working on personal projects and doing research on sites like CodeSchool and Udacity helped me figure out my interests and how to choose jobs that align with my interests. However, the most helpful thing I did was keep an open mind about what I want to do and be willing to take whatever opportunity comes my way.”