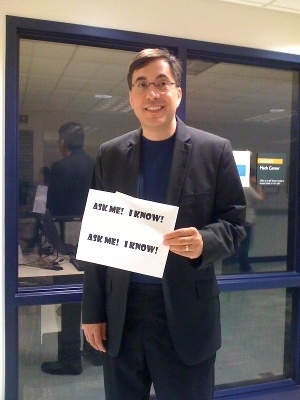 At the end of the 2012-2013 academic year, Dr. Edward Aboufadel will end his second three-year term as unit head of the Department of Mathematics and move on to new endeavors.

In his time as unit head, Ed has supported and worked with faculty to bring about many important accomplishments within the Mathematics Department. Some of the work that Ed is most proud of include the remodeling and expansion of the mathematics and statistics tutoring centers, the establishment of a study abroad program in Tanzania, reform of math placement procedures, and the continued vibrancy of undergraduate research within the department. Ed states, "A consequence of all of these accomplishments, and others, is that the Mathematics Department has a strong, positive profile on campus among students, faculty, and administrators."

Mathematics faculty colleagues appreciate Ed's commitment to excellence and support of faculty. Prof. Shelly Smith states, "Faculty members have a lot of responsibilities outside of teaching classes and grading homework, and their department chair can have a significant impact on many aspects of their work. Whether it is helping faculty members create a schedule that gives them time to focus on their scholarship, develop new approaches to teaching, or get funding to attend a conference, Ed has been very supportive and proactive in helping department members find opportunities to develop professionally and better serve our students."

Prof. David Coffey is also appreciative of the support that Ed gives to faculty and his encouragement to "think beyond the way things have always been done; we have accomplished a great deal thanks to his leadership." Prof. Ted Sundstrom concurs, saying, "What I have appreciated about Ed as department chair has been his desire and ability to balance the needs of individual faculty members with the needs of the department. I have always found him to be open, accessible, and willing to listen." Prof. Cathy Gardner adds, "Ed is generous with his time. He works well with administrations to see to it that department needs are met."

Ed has a long and continued interest in campus leadership. In addition to serving the math department as an assistant chair for many years, Ed has chaired a major committee in the College of Liberal Arts and Sciences, served on a key university committee for faculty salary and budget, and engaged in leadership beyond Grand Valley as secretary of the mathematics section of the American Association for the Advancement of Science. Moreover, in his role as unit head, Ed has had the chance to work with a wide variety of faculty and administrators across the college and university. Dr. Maria Cimitile (Assistant Vice President for Academic Affairs at GVSU) has collaborated with Ed in a variety of capacities and observes that he has skills that make him a valuable leader. She states, "Ed possesses the energy and magnetism that draws others to listen carefully to what he says. Across the university, he is widely esteemed. Groups that are problem-solving or developing new initiatives often consult Ed, knowing that he will offer constructive and well-thought out responses that will help with the issue. Another reason he is widely consulted by vice-presidents, staff and faculty is because he always strives to aid in endeavors and not merely point out the potential flaws."

Ed has become well-known to students in Mackinac Hall for standing at the intersection of the A, C, and D wings during the times between classes in the first week of each semester holding a sign that says "Ask Me, I Know". Through this kind service, he directs lost students to their classrooms in the sometimes confusing layout of the building.

Ed recently learned that his overall teaching, scholarship, and service has been recognized with the university's Niemeyer Award for 2013.

During the 2013-2014 academic year, Ed will continue his leadership as acting unit head for the Biomedical Sciences Department and as an interim Assistant Dean of the College of Liberal Arts and Sciences (CLAS). Ed states, "this will be a great opportunity for me to learn about how another department functions, to get to know another group of faculty, and to find out more about the discipline of medicine. I'll still have a presence in mathematics, but a much smaller one."

We hope you will join the Mathematics Department in wishing Ed well as he embarks on the next phase of his career. Dr. Jon Hodge will begin serving as the chair of the mathematics department beginning in May 2013.