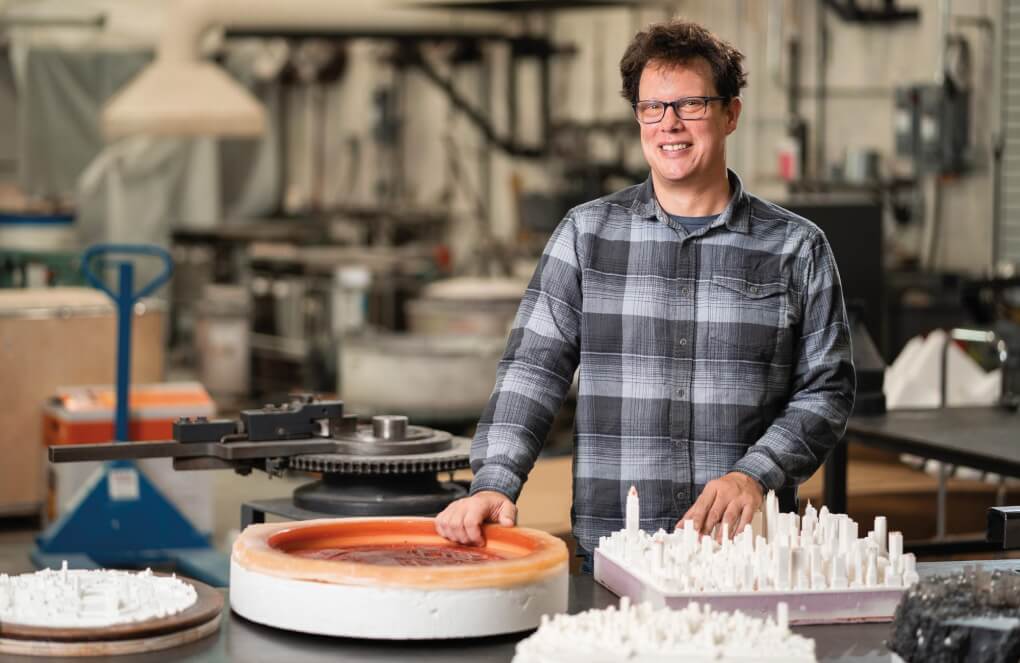 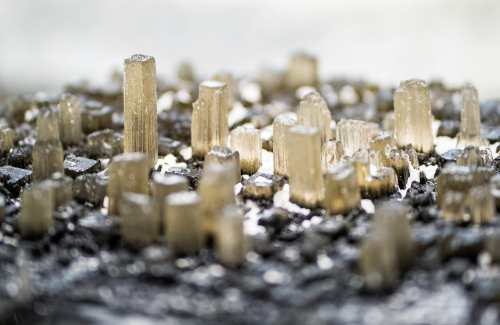 Detail of ‘Recasting Portland’ is pictured.

Norwood Viviano spends much time contemplating and studying cities — their plight, their futures with climate change and how their histories shaped them.

He sees a fragility threaded throughout those circumstances, which is why, as a sculptor, he chooses to use glass to convey his commentary.

“Glass is able to draw people in, partly because it’s a beautiful material. It has a way of making people slow down and investigate,” said Viviano, associate professor of sculpture and foundations.

Investigating makes sense, given the backbone of such pieces is information and hard data that Viviano studies and ultimately infuses into his work. He presents an artistic, 3D viewpoint on some of the compelling social issues of our times.

For recent pieces on public display, Viviano studied history. The result was the use of a glass kilncast to create a cityscape of contemporary Grand Rapids that was then placed atop a table from Imperial Furniture Co. to show his viewpoint on how the furniture industry shaped Grand Rapids.

He created the piece, “Recasting Grand Rapids,” specifically for an exhibition at the Grand Rapids Art Museum that featured works of contemporary glass. Viviano’s piece showing how the auto industry is tied to Detroit had already been chosen for inclusion in the exhibition.

As he prepared to create the piece, Viviano said he was inspired by learning about the people of Grand Rapids employed by the furniture industry in the late 19th and early 20th centuries. He noted many employees were immigrants with distinctive furniture making skills.

“It was basically a conversation about how the community of craftspeople who made these objects in this historic time frame of Grand Rapids represent what Grand Rapids is now,” Viviano said.

The forces that forge and change cities continually fascinate Viviano. He said his passion is fed, in large part, by growing up in the Detroit area before moving away at age 18, then during sporadic visits noticing the stark transformation that took place in the region.

“Glass is able to draw people in, partly because it’s a beautiful material. It has a way of making people slow down and investigate.”

It led him to ask questions about what could happen to other cities, and how he as an artist could address those concerns.

He explored a different concern about cities’ futures through his “Cities Underwater” series, in which he depicted the expected land loss of 16 American coastal cities due to the rise in sea levels. Using LiDAR and scientific data, he created sets of nesting glass cylinders to show the projected loss of land mass over the next 500 years, affecting a large swath of the American population.

This mix of science, technology and art is also part of his classroom experience. Much of his current teaching involves 3D printing and the classes often include students from STEM disciplines, such as engineering or biomedical sciences. He said he enjoys working with students on how to creatively push the boundaries of the technology, giving them an advantage in various career paths.

But even as much as Viviano embraces technology and science in his work, it suits him just fine if people studying his pieces don’t know the extent of those background studies.

“I don’t want the reason for the work to be interesting is because I’m using technology,” he said. “Lots of people who interact with my work never know I go through all those steps.”

What they might see instead is the intricate work of an artist who earned an undergraduate degree in glass but, in graduate school, strayed from the material to explore others as a sculptor, then reignited his original passion with an artist-in-residency stint at the Museum of Glass in Tacoma, Washington.

For the last 10-12 years, he has worked extensively with glass, inspired by the advancements in technology that allow for innovative formations and a community of supportive fellow artists working with the same material.

As for why he likes working with glass, his answer is simple: “It’s humbling.”