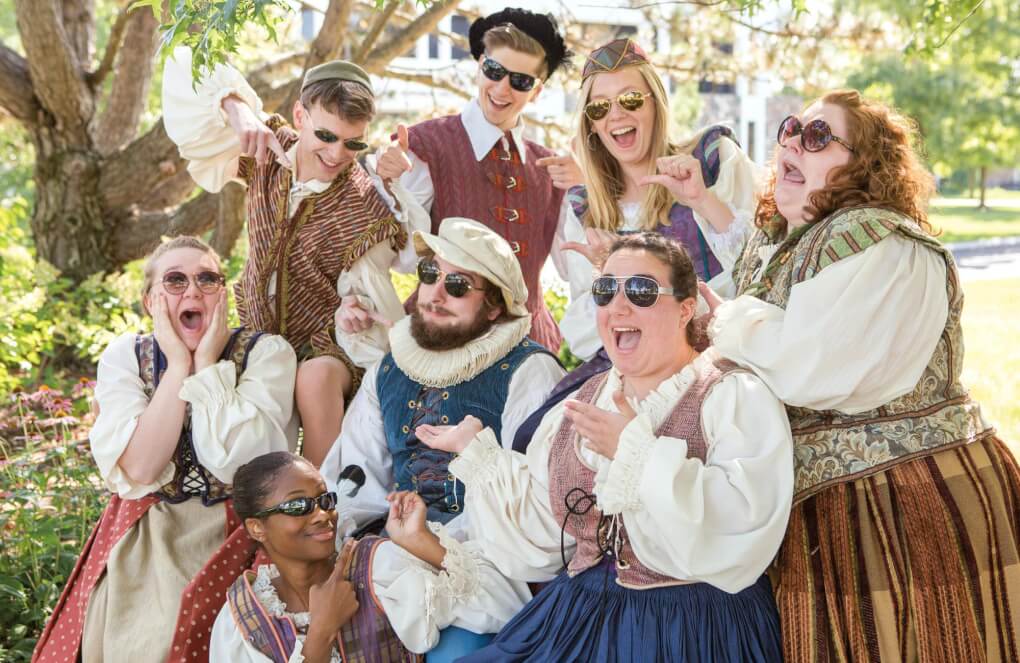 Following a performance at a school in the Bahamas by Grand Valley's traveling Shakespeare company Bard to Go, a young student walked up to the six members of the cast and said, "You guys inspired me to want to read more Shakespeare." The student then proceeded to hug every member of the ensemble.

“The point of our show is to educate and excite people about Shakespeare and help them realize how much fun his works can be.”

Ariana Martineau, a senior majoring in history and education, and a current cast member, said that special moment reflected what Bard to Go strives to accomplish by traveling to schools around the globe.

"The point of our show is to educate and excite people about Shakespeare and help them realize how much fun his works can be," said Martineau.

Bard to Go traveled to the Bahamas in October to perform at the annual Shakespeare in Paradise Festival in Nassau, and at several local grade schools. It was the only international group invited to perform at the festival this year.

During the festival, students performed their 50-minute 2017 Shakespeare Festival show, "The Wonder of Will: This Is Your Afterlife!" The play asks what would happen if Shakespeare were brought back to life, and then goes on an adventure through his most famous plays. It included scenes from "Hamlet", "Richard III", "The Comedy of Errors", "A Midsummer Night's Dream", "Romeo and Juliet", "Macbeth" and "The Merchant of Venice."

Karen Libman, professor of theater and Bard to Go founder, said performing in the Bahamas exposed her students to audience members who are more responsive and vocal than those in the U.S.

"Bahamian audiences cheer and laugh, and they're really much more viscerally involved than American students who are told to stay in their seats and not make any noise," said Libman. "It's an actors dream to get this kind of response, so it was wonderful for our students to experience that."

"Talk backs" follow every performance, giving audience members the opportunity to ask students questions ranging from the logistics of memorizing lines to their favorite Shakespeare plays. Libman said they are an intrinsic part of every Bard to Go show.

"In the U.S., talk backs act as a recruiting and outreach tool, but when we do international programs, they are much more like a cultural diplomacy through the arts," she explained. "Shakespeare is really cultural currency, and in any country where English is taught or learned, Shakespeare is a part of that education."

Chloe Chavers, a senior majoring in theater and a first-time cast member, said she enjoys introducing people around the world to the accessibility of Shakespeare and his works.

"Shakespeare's work completely changed the world of theater, and I find value in being able to share them with audiences who may or may not have been exposed to Shakespeare previously," said Chavers, from Grand Rapids.

Diving into local cultures is a primary reason why Libman said she enjoys taking students abroad. For example, Bard to Go students participated in an International Day in Nassau, which exposed them to the different cultures of people who live in the Bahamas. Students also experienced other performances and events at the festival and interacted with industry professionals.

Traveling and performing internationally is typically a biannual experience for Bard to Go students. The troupe's first trip was in 2004 to Jamaica. Since then, Bard to Go has performed in Italy, China, Canada and the Czech Republic.

In May, Bard to Go students added a Dominican Republic stamp to their passports. They performed a 45-minute version of "Macbeth" five times at three different schools in Santo Domingo.

"We are sharing our American take on Shakespeare with students and audiences in other countries as a way of being cultural diplomats and as a way of introducing ourselves through the universal language of theater," said Libman. "That's certainly something that is important for our students as they go into a future of working and living in a global society."

Bard to Go also performs for hundreds of students at various secondary schools throughout Michigan every fall during the annual Grand Valley Shakespeare Festival, Michigan's oldest and largest festival of its kind. Since 2013, the troupe has performed as an official entry in Grand Rapids ArtPrize, the world's largest open international art competition.

Bard to Go began in 2001 as a way to expose Shakespeare to students at schools that couldn't afford bus transportation to Grand Valley to watch the Shakespeare Festival's main stage production.

In order to accommodate class periods, Bard to Go's performances were condensed to 50 minutes with only six actors, a concept known as Short Shakespeare. Hence, Libman said each year's show, which is written by Grand Valley faculty, provides a Shakespearean sampler platter.

"We want to whet the appetite of the students in the audience and not be the end-all-be-all," she explained. "We're not trying to teach them everything about each play because we leave that to their teachers, but we want to get them excited about Shakespeare."

Along with the show itself, the cast and director of Bard to Go changes each academic year, with auditions held in the spring. Auditions are open to all students, regardless of major.

Parker Ykimoff, a senior majoring in theater, said Bard to Go is not only a valuable experience because of the relationships formed within the group, but also because students get to create new relationships with audiences through their performances.

"We foster international relationships on a personal level by showing many children of all backgrounds this universal theater form in an easily understood way, giving them a springboard to get more involved later in life," he said.

Libman said she notices that Shakespeare's work is a foreign language to U.S. students, and that Bard to Go's ultimate goal is to change that narrative.

"Young students are not used to hearing Shakespeare, and a lot of times when you ask them about Shakespeare, they say they hate reading it, but then they see it live and they are transformed," she said. 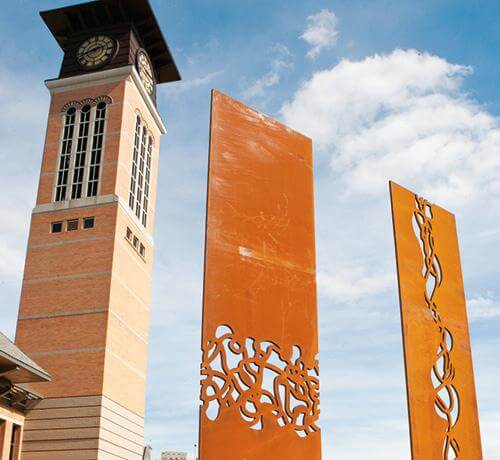 More than 16,000 pieces of art reside in Grand Valley's permanent collection, many of which have found a home at the university after competing in ArtPrize.