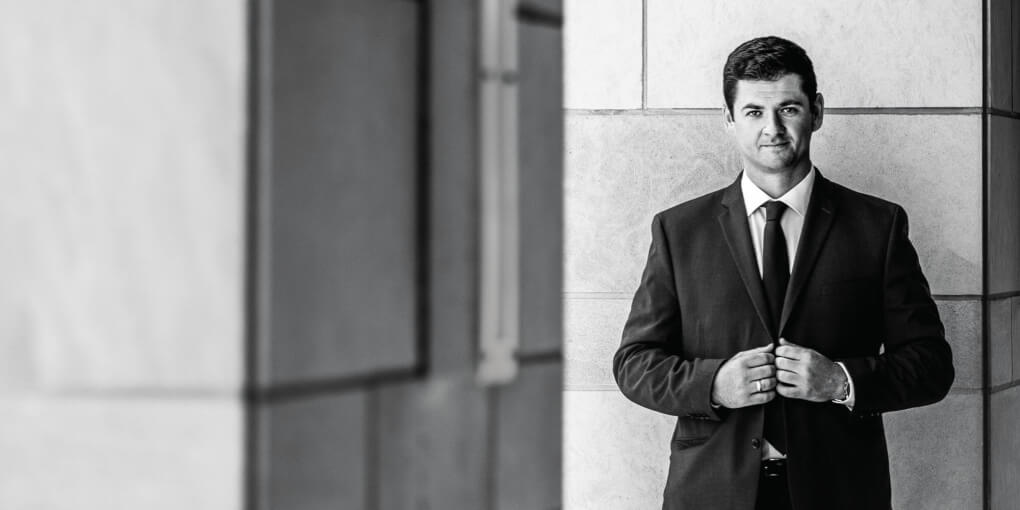 Bringing change through empowerment and challenge

A leisurely day at the office, having a cup of coffee and checking his email is a day that Miloš Topić doesn’t look forward to.

Topić, Grand Valley’s new vice president and chief digital officer, has spent his working life, as well as much of his childhood, overcoming difficulties — he had to flee conflicts in the Balkans when he was a child. He’s a problem solver and likes to challenge the status quo, while also challenging himself and his teams to grow and improve. He enjoys action, excitement and progress.

Most recently, Topić was a vice president and chief information officer at St. Peter’s University in Jersey City, New Jersey, where he settled with his growing family.

Grand Valley Magazine spoke with Topić about Grand Valley, what motivates him, his heroes and how his experiences as a refugee shaped his world view.

You started at Grand Valley in August. What should the campus community know about you?

I like to look for better ways to do the things we do, as well as introduce some new things. I enjoy taking risks and looking for ways to bring in areas around the university that I’ve not collaborated with so we get better. I’m focused and passionate about leadership and innovation, I like to inspire and empower people to lead and help them succeed along the way.

You talk a lot about success and leadership, saying you want to make a difference in the lives of the people you work with and work for. How do you intend to do that?

I start by listening. I met with every single person who works in IT, met with other divisions and departments, faculty and students, trying to get a better sense of needs and the culture. Now I’m part of this culture, and as the management consultant Peter Drucker once said, “Culture eats strategy for breakfast,” so I try to find what people are comfortable with and what they’re not.

Too many folks in leadership positions across a variety of industries and walks of life talk a big game, but rarely deliver on those promises. I like to instill confidence and belief in people and mentor them for growth and opportunities. Ideally, I would want one of my colleagues one day to take over my role.

“As long as my family is good, together, and happy and healthy, that grounds my leadership style and perspective to focus on people first.”

You’ve been at Grand Valley for a while now; what is your perception of this campus?

It’s a great place with a lot of intelligent and kind people. I get the sense that I got on a spaceship right as they were closing the doors. The energy and poise is here. We’ve done well for 60 years and we are buckling in to accelerate to the next level.

Your role oversees IT and academic computing. How has the reality of jumping into this role in a pandemic changed how you approached your role here and how might it change higher education?

I don’t look at the pandemic as a disruptor of the industry, but it has highlighted and moved faster what was already coming, and exposed many truths.

The pandemic has uncovered the opportunities that technology has to be the hub in the hub-and-spoke model. Tech is ingrained in the fabric of everything we do, but hasn’t been generally funded as such, it wasn’t invested in the right way, or even had a seat at the table. Under the leadership of President Mantella, my position gives us a seat at the senior leadership level, which didn’t exist previously.

About 80-95 percent of things we do here both rely on and need technology, but, at many universities, investments in tech fall near 3-5 percent of their operating budgets. This is an opportunity to reflect and realize there are challenges we can improve on, and better serve our community.

What motivated you to leave New Jersey and move to Michigan?

I lived in New Jersey for 22 years, since I moved to the United States. But a lot of this was just timing. A year before I came here, my wife and I talked about going somewhere else with the kids, somewhere where I wouldn’t have to spend three hours a day in traffic. So we looked, had a few offers, but nothing felt right. What really got me to say “this is the place” was President Mantella. I believe in “hiring” your boss. I believe that who you report to matters. President Mantella’s active involvement on calls with me talking about the vision she has for Grand Valley got me interested and excited about the possibilities.

When you think about your heroes or people who motivate you, who comes to mind?

Nikola Tesla. If I had a time machine to have lunch with him, it would be a thrill. No single human being has contributed more to modern society than Tesla. Alternating current, radio, fluorescent lighting, remote control, wireless electricity, and the list goes on. One man, over 100 years ago, said that people are going to have communication devices that will fit in their pockets and be able to talk to each other anywhere without wires.

Everything he did was for the betterment of others. He died broke,was a terrible businessman, but was completely selfless. And he was Serbian, from a small nation, yet he did a lot for us all. We come from the same part of the world; how he grew up and in such poverty and became who he became is to me a sort of moral compass.

Can you talk about your upbringing?

I was born when Yugoslavia was six republics put together. I was born in Bosnia, in the middle, and war broke out in the ’90s. I was nearly 12. I had uncles and aunts who lived in Belgrade, and I went and lived there as a refugee to get away from the war. I was a refugee twice in my life. There was one time I will never forget: 3 a.m., my dad woke us up to get us on a bus to Belgrade, into the unknown. That was in April 1992. Then in July 1998, my family moved from Serbia to the U.S. through a refugee program.

I’ve been talking about taking risks my whole life, so I decided to do a year in the U.S. My uncles lived in New Jersey and when the officials asked, “Do you actually know anyone in the United States?” And we said yes and that’s how we ended up there, with two suitcases each.

How do you think that personal experience informs how you lead people now?

I think it is why I’m so focused on people first. Once you move across the world multiple times, you’re no longer tied to a place. A house doesn’t matter to me. As long as my family is good, together, and happy and healthy, that grounds my leadership style and perspective to focus on people first. I care less about the shiny things, cars, that stuff; that comes later, but focusing on people first and supporting them is what’s it all about. One should always focus on people first, as they matter the most.