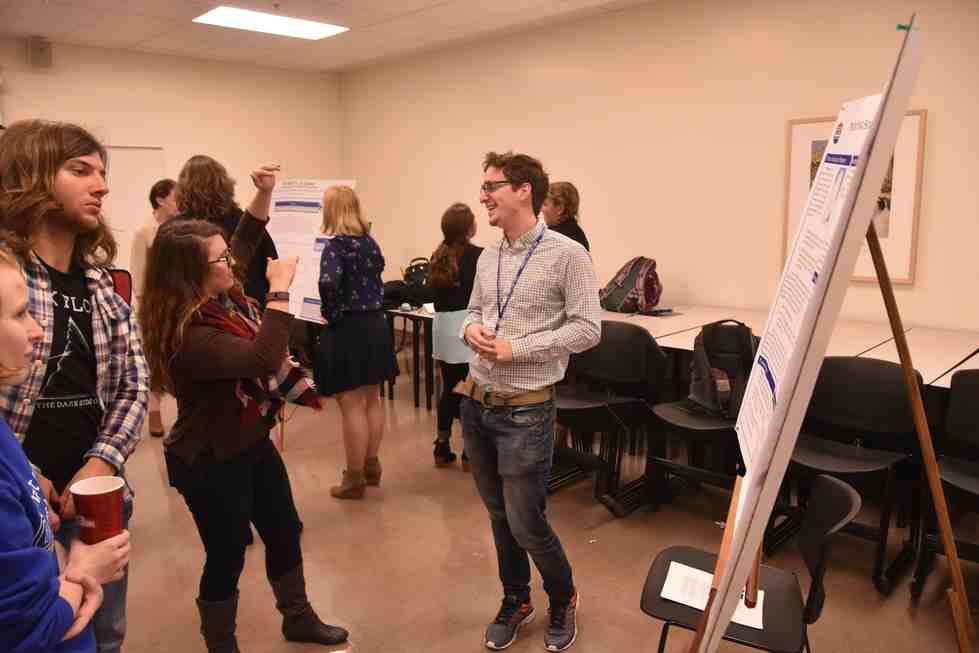 Over the weekend of October 6-7, 2017, about 100 mathematicians gathered at GVSU to learn about the latest research in graph theory and applications at the 58th MIdwestern GrapH TheorY Conference. Participants came from various institutions across the US, including Louisiana State University, University of Vermont, and University of Nebraska, and even from outside the US, from Zhejiang Normal University and Queen’s University (Canada). The conference was organized by Lauren Keough, Mike Santana, and Taylor Short from GVSU, and Ben Reiniger from Illinois Institute of Technology. The very first MIGHTY conference was held in 1978 at the University of Michigan, Ann Arbor, and hosted by Frank Harary, who is considered to be one of the fathers of modern graph theory. The conference was held at GVSU once before in March 1991, with Karen Novotny as one of the organizers. 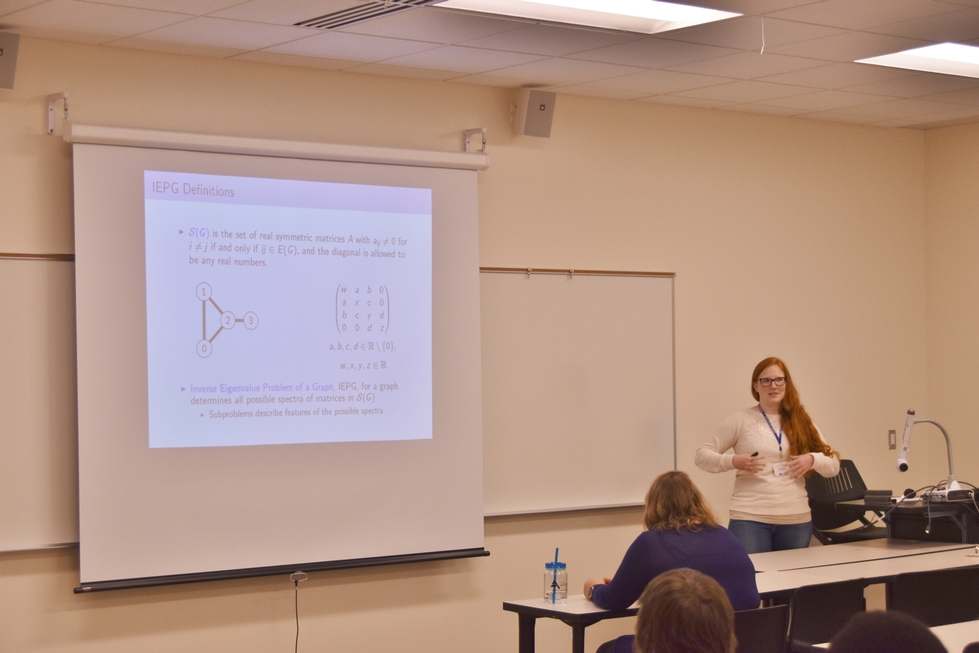 The 58th MIGHTY conference started out with a plenary talk accessible to undergraduates by David Galvin from University of Notre Dame, titled “Equilateral and Almost Equilateral Sets in Rn.” An equilateral set is a set of points any two of which are the same distance apart. In his talk, Professor Galvin walked us through various results about equilateral and almost equilateral sets through a mostly visual journey. The talk was followed by a poster session for undergraduate students to share their research work with participants while enjoying pizza. A total of nine posters were presented by students from Kalamazoo College, University of Michigan, Flint, Michigan State University, Saginaw Valley State University, and Grand Valley. Posters included topics such as chicken pecking orders, colorings of graphs, and variability of baseflow of watersheds for the Chesapeake Bay. 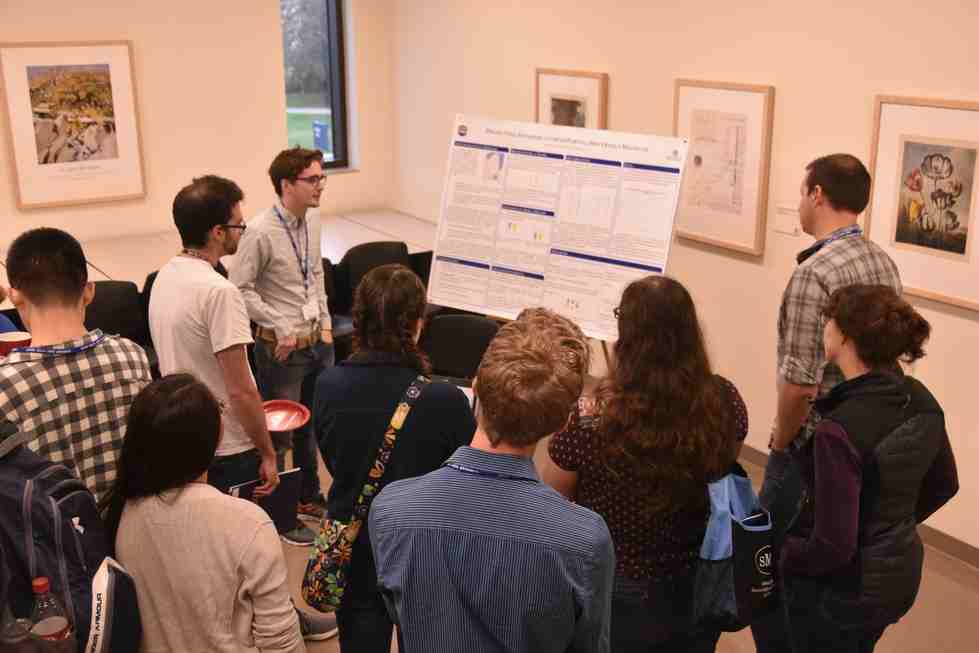 The opening talk on Saturday was the second plenary talk of the conference, presented by Doug West of Zhejiang Normal University and University of Illinois, titled “Reconstruction from the deck of k-vertex induced subgraphs.” The talk focused on reconstructing a graph only knowing the smaller graphs inside it. The rest of the day was devoted to 40 contributed talks on various graph theory topics given by faculty, postdocs, graduate students, and even some undergraduates, along with the last plenary talk of the conference, when David Galvin spoke on “Plates, Olives, and Morse Theory.” The topic of the talk was based on the game of plates and olives introduced by Liviu Nicolaescu from University of Notre Dame. The game starts with an empty table, and at each step we either add an empty plate, add an olive to a plate, eat an olive from a plate, remove an empty plate, or combine the olives from two plates and remove one of the plates. The talk described interesting mathematical results that correspond to this game. Both of the plenary talks from Saturday can be watched in their entirety on the GVSUMath YouTube channel. Between talks, conference participants enjoyed chatting more about graph theory, math, GVSU, and other topics. 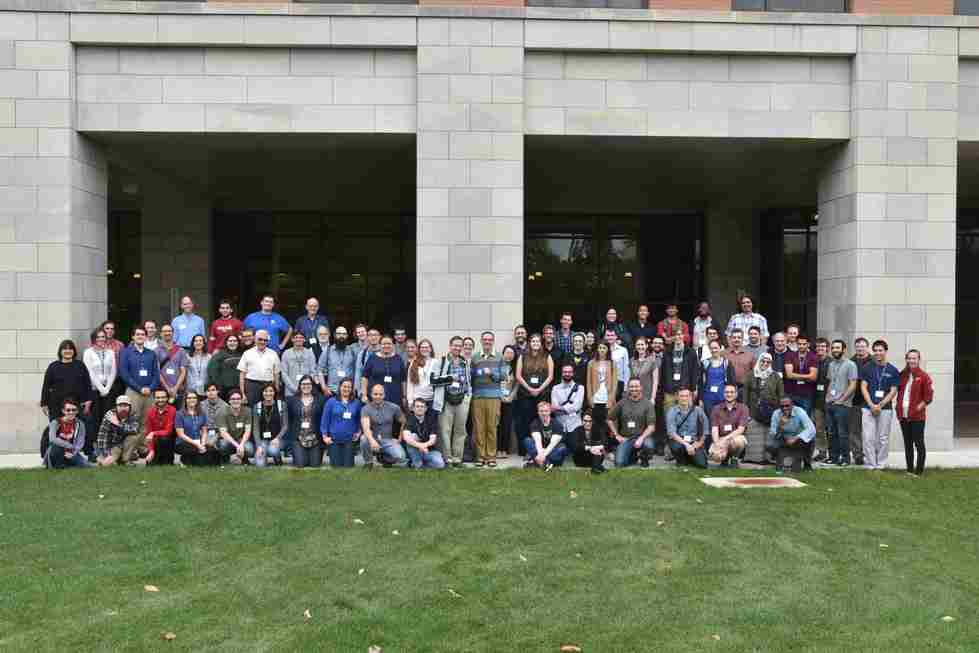 The conference ended with a group photo of all participants taken by David Clark of GVSU, who was the unofficial photographer of the conference.

The conference was supported by the Department of Mathematics, the Center for Scholarly and Creative Excellence, the College of Liberal Arts and Science, the Office for Undergraduate Research and Scholarship, and a $6000 NSF grant awarded to the conference organizers in July 2017 to fund student and early career mathematician travel to the conference.