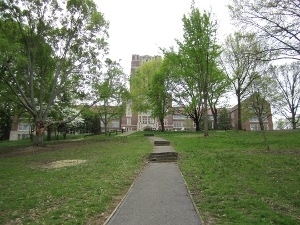 Ayres Hall, the mathematics building, atop the Hill at the University of Tennessee, Knoxville. Photo by Kyle Golenbiewski.

We interviewed three of these students to get more information about their current studies and their impressions on their time at GVSU. Kyle Golenbiewski, who also graduated with a double major in mathematics and physics, is attending the mathematics program at the University of Tennessee at Knoxville. Kyle says his decision to attend graduate school was an easy one. His experiences both in mathematics and physics courses combined with discussions with faculty members “sparked [his] curiosity into considering grad school and the opportunity to study in an environment that emphasizes on the rigor and skills necessary for academic research was one [he] could not pass up.” Kyle has already completed one of the requirements of the Ph.D. program at UT: passing the Diagnostic Examinations in Applied Calculus and Linear Algebra topics. He believes that GVSU prepared him well for graduate school since few entering graduate students pass both exams. Kyle thinks that during his time at GV, he learned many concepts and ideas in all the courses he took and has come to appreciate the variety of mathematics courses that are offered. His one piece of advice to current students is to take advantage of this variety and to take as many mathematics courses as they can. He says “With each course not only do you learn new information and concepts; but, perhaps most importantly, you learn to think and reason differently.” He also thinks that especially the 400-level courses help students develop their mathematical rigor and writing skills significantly. Kyle is still undecided on his ultimate career goal but his first year at UT has opened his eyes to a possibility he had not considered before: teaching at the university level. He indicates “I have fully embraced my teaching responsibilities and am excited about the opportunity to give back to students what the mathematics department at GVSU has given to me.”

Nick Krzywonos is currently in the Applied and Computational Mathematics program at the University of South Carolina. His eventual goal is to find a job in industry which “combines [his] love for mathematics with [his] (developing) skills in computer programming.” Looking back at his experiences at GVSU, Nick finds two major experiences that helped him gravitate toward graduate studies. In summer 2009, Nick participated in a research project with Dr. Feryal Alayont funded by the Grand Valley Student Summer Scholars program. He reports that he “really enjoyed working on an open problem and contributing to the pool of mathematical knowledge…[and producing] a paper [on the results] that [he] could be proud of for a long time.” Nick also recalls that the sequence of courses in operations research that he took with Dr. Paul Fishback and the independent study with Dr. Fishback on matrix operations were influential for him. He says that “It was in this independent study that Dr. Fishback taught all of us, and simultaneously learned with us. This was really important for me because it showed me that studying mathematics is a lifelong learning experience, and that there was still plenty more for me to learn.” In summary, Nick believes that GVSU did an excellent job providing a positive learning environment. He cites the funding available for attending conferences and working on research projects as examples contributing to this positive environment. He also mentions that “The faculty was also very dedicated to teaching the students and this is something that I’ve really noticed ever since I came to USC.” Finally, Nick advises the current undergraduates to “challenge themselves with their coursework and get the most out of their education…take advantage of the activities that GVSU and the math department offers outside of the classroom.” He ends with the following note: “Hard work and going the extra mile are worth it in the end.”

Cliff Taylor was the Outstanding Senior Award recipient in 2010 Cliff is currently pursuing a Ph.D. at the University of Kentucky. His career goal is a professor position at a teaching-focused college after getting his doctorate. He has even started considering topics for his thesis, with his two current favorite topics being combinatorics and coding theory. He has already been offered to work as a research assistant on a combinatorics project this summer, which will help him in his decision immensely. Cliff has been pleasantly surprised about how smooth his transition from GVSU to graduate school was. He feels that Grand Valley prepared him well for the stresses and rigors of graduate school. During his undergraduate studies, Cliff took as many mathematics courses as he could fit into his schedule. Additionally, he participated in a summer research program during his second year, and completed a mathematics senior project and an honors senior thesis in his last year. He advises the current undergraduates to just do the same: “Take as many math classes as you possibly can. Having seen a topic before (in even the broadest sense) can help tremendously. Participate in REUs if possible; they are a great way to learn new mathematics and to practice the things above.” He thinks that graduate school is stressful but it is not unmanageable if a student has prepared himself well. He believes having a full schedule of courses and outside of the classroom experiences will help a student develop coping strategies for the time constraints and stresses of graduate school. It looks like it did help him do that. Cliff also recalls his experience in the Structured Learning Assistance program at Grand Valley as an invaluable experience in preparing him for his current teaching assistant job. Finally, he cautions the students to “Take things one step at a time- if you keep thinking about all the obstacles you will have to overcome, it is all too easy to get discouraged. Just have a plan in mind and tackle the obstacles one by one.”


Page last modified June 23, 2017
Report a problem with this page