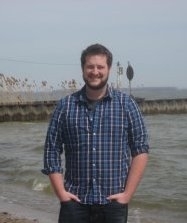 If he's not studying mathematics or facilitating an SLA section of MTH 110, look for Cliff Taylor near water enjoying one of his favorite activities of boating, swimming, fishing, and kayaking. Originally from La Salle, in far southeast Michigan, Cliff worked summers at a Lake Erie marina where he fueled boats and loved the outdoor setting and friendly people he met.

Following his sisters Summer and Chelsea to Grand Valley, Cliff originally planned to major in engineering. Though he always loved mathematics, Cliff, like many entering students, was not familiar with the wide variety of opportunities open to mathematics majors and so chose a major that would allow him to learn a lot of mathematics. However, a conversation during his first semester with faculty member Professor John Golden led him to reconsider, and now Cliff will soon graduate as this year's Outstanding Senior in Mathematics.

Besides taking almost every mathematics content course offered at Grand Valley, Cliff participated in an REU program at Miami University in Ohio after his sophomore year where he helped search for a particular kind of elliptic curve. He calls this "a great experience" as it gave him a chance to be immersed in a research environment with other like-minded people. He continued learning about elliptic curves as part of a senior honors project with Grand Valley faculty member Feryal Alayont. Finally, Cliff completed an independent capstone project in which he created a program to illustrate tessellations of the hyperbolic plane. You may see some of those illustrations in another article.

Cliff's future plans are to attend graduate school in mathematics. While waiting to hear from a few more schools, he is quite interested in an offer he has received from the University of Kentucky. He plans to earn a Ph.D. in mathematics and find an academic position at an institution like Grand Valley, so that both teaching and studying mathematics will be the focus of his activities.

During his time at Grand Valley, Cliff reflects that he has learned the most from the instructors who taught the most difficult courses. Cliff's advice for current students? "Appreciate the professors who challenge you. You will be able to learn more and remember it longer."

Cliff's sister Summer earned a mathematics degree from Grand Valley in 2003 and is now working in Toledo doing market research for Proctor & Gamble. Utilizing her mathematics skills and expertise, Summer manages a department that takes market research data collected by others and analyzes it to determine trends used to develop marketing strategies.