In the summer of 2010, the Grand Valley Mathematics Department will host the 10th instantiation of its National Science Foundation (NSF)-funded Research Experience for Undergraduates (REU).

For the first four years of this grant-funded program, Prof. Steve Schlicker served as the principal investigator; for the five year since, Prof. Ed Aboufadel held this role. We asked the two of them to look back on the past decade as the REU transitions this summer to new leadership under Profs. Will Dickinson and Jon Hodge. 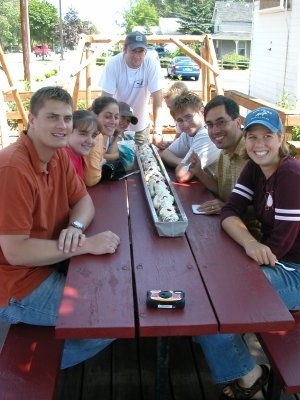 The program at GVSU is designed for undergraduates who have not had a significant research experience before, which differs from many other REUs in mathematics. The awards won at MathFest and the published papers are a testament to how hard the students work, and how successful they can be, if given the opportunity. While it's not a goal to have all students publish a paper or even go on to graduate school, the program's success at giving students an interesting and encouraging experience definitely seems to promote these outcomes on a regular basis.

When asked what has been the most rewarding part of his experience with the REU, Prof. Schlicker responded that "It has been a privilege to work with such talented students from GVSU, and from schools across the country, in the REU. It has been enjoyable to interact with these students and to learn about them and their institutions. I'd like to think that, at least in some small way, we have had a positive influence on these students' lives and careers. It has been especially rewarding to continue to work with REU students after the program to publish papers, give talks, or write recommendations for fellowships, awards, or graduate school. The program has also allowed me to remain active in mathematical research, and the excitement the REU fellows have for the work keeps me energized." Prof. Aboufadel went on to add that "The program has given me an opportunity to work with outstanding students from around the country on research projects that I probably would not have been able to pursue by myself. I have learned a lot of mathematics from working with my students and listening to talks by other students, and I've gotten to attend MathFest nearly every year to be a part of the national community."

Profs. Schlicker and Aboufadel, the many other faculty mentors, and all participating students are to be congratulated for their outstanding work and their collective contributions to the mathematical community. The program remains the only NSF-funded REU at Grand Valley, and the program has gained a strong national reputation that attracts top students every year. Profs. Dickinson and Hodge recently learned that the program will be funded for an additional three summers based on the proposal they submitted to NSF in fall 2009.

You can learn even more about the program including the interesting research projects for this coming summer and those from past years.


Page last modified July 19, 2017
Report a problem with this page