Senior Sally Beemon spends a semester in the UK

After growing up in Charlevoix, MI, Sally Beemon attended Northwestern Michigan College in Traverse City. When she headed south to continue her education at GVSU, she had no idea that decision would eventually lead her to spend 4 months overseas.

From the time she first visited campus, Sally has had good feelings about GVSU. She loves the small class sizes, high quality professors, and the relatively small and interactive mathematics department that is home to her major. Getting to know other students well has been one of the most helpful and enjoyable parts of her time here. Occasionally, faculty have even presented unexpected opportunities leading to new experiences. 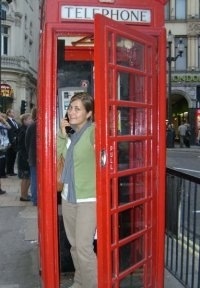 Sally had always dreamed of travelling abroad, but assumed it would have to wait until after graduation. Then, a little over a year ago, she got an email about different opportunities for science and math students to study abroad. After talking with some departmental faculty as well as advisors in the Padnos International Center, Sally settled upon Kingston University in Great Britain as the location for her fall 2008 semester abroad. There she took one advanced mathematics course that counted toward her GVSU major and also studied British culture to complete her theme requirement for the general education curriculum. Sally reports that the entire experience cost little more than a regular semester at GVSU!

Upon being asked what the best three experiences of her time at Kingston, Sally said:

Sally shares that her time at GVSU prepared her well for the math course she took at Kingston; she ended up being one of the top students in the class. Back at GV, her favorite math course has been Math 210, the very first one she took here at GV, in part because the course taught her so much about understanding and justifying why certain mathematical results are true.

With her study abroad experience behind her and graduation fast ahead, Sally turns to preparing for life after college. Recently she was delighted to accept a job offer from Auto-Owners Insurance in Lansing, MI, where she will begin working in the programming department. She is excited that this job will begin a career where she can use her math and logic skills to benefit not only the company she serves but also the industry as a whole.

In her spare time, Sally loves to travel, both locally here in Michigan as well as around the United States and the rest of the world, in an ongoing effort to find amazing things to see and people to meet. She especially enjoys camping and time on the water during beautiful summer days in northern Michigan.

As she prepares to depart GVSU, Sally leaves some advice for current students: "Never be afraid to step outside your comfort zone and try something new. Always explore the impossible: it may be more possible than you think. For instance, financing studying in another country is much more feasible than you may think!"