When she took a job at Auto-Owners Insurance (The "No-Problem" People) right after graduating from Grand Valley with a math degree, Darlene Miller thought she would work there for a while to get some experience and then move on. It's now almost ten years later, and Darlene is still loving her job and the opportunities it's given her over that time.

Located in Lansing, Auto-Owners offers life, home, car, and business insurance sold through independent insurance agents. What may seem surprising is that the company employs roughly 400 programmers, 63 of whom have degrees in mathematics. Darlene says that Auto-Owners can help new associates become proficient with the technical side of programming, but they need to possess many of the skills that a mathematics degree develops: logical thinking, problem-solving, attention to detail, and effective communication. In addition, she finds that mathematics graduates are typically very flexible and can easily learn new concepts.

Originally hired as a COBOL programmer, Darlene found the skills she acquired taking mathematics courses immediately put to use. The proof-based courses, such as Communicating in Mathematics, Modern Algebra, and Euclidean Geometry, helped her think logically, which was invaluable in designing the programs she needed to write. Part of her job was to automate some of the actuarial work that was previously done manually. Besides the mathematical task of programming, Darlene was working with mathematical concepts, such as future cash value, that are important in actuarial work.

While Darlene recently moved into a management position in which a group of programmers report to her, she is still appreciative of her mathematical training. She continually relies on the communication skills she developed and cites writing assignments for Paul Fishback's calculus courses as an important part of that development. These skills come in handy, for instance, when she has to speak about IT developments for audiences up to 150. In fact, when she is looking to hire new people, she is primarily looking for good communication skills. "I can't stress that too much," she says. 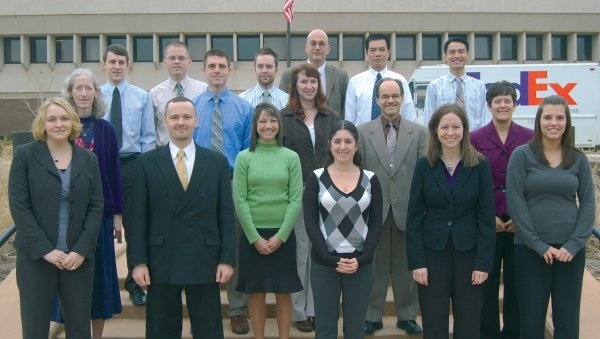 Darlene spoke to fellow Grand Valley alumnus Megan Shaff, who works in the actuarial division of Auto-Owners. Part of Megan's responsibility is to present and support recommendations in a group setting. Megan recalls that completing group projects at Grand Valley taught her to work productively and efficiently, both necessary skills in her current position at Auto-Owners.

Finally, Darlene says a typical Auto-Owners programmer may handle up to 15 projects at once and has to shift focus from one project to another very quickly. She therefore encourages students to learn how to handle several tasks at once and to set priorities.

Darlene has stayed at Auto-Owners because she consistently finds the work challenging and rewarding. Perhaps more importantly, she appreciates the culture at Auto-Owners, which strongly emphasizes values such as honesty, teamwork, loyalty, and constructive relationships. Many workers there report a great deal of satisfaction in their work, and the turnover is relatively low. Darlene appreciates being part of a group of people that care about and take pride in their work.