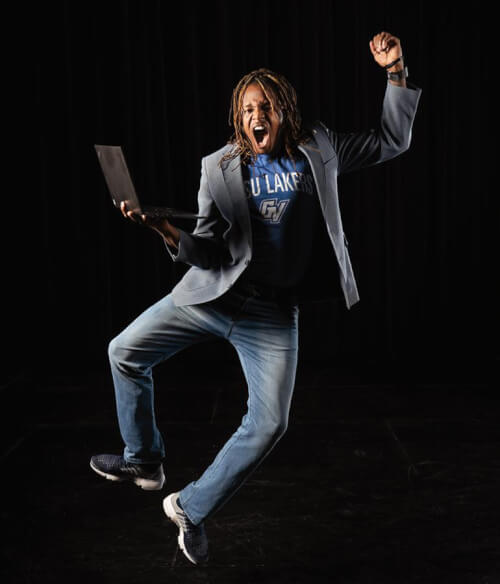 Before the age of YouTube tutorials, Torrey Thomas learned to dance by watching television shows like “American Bandstand,” “Soul Train,” and “Solid Gold,” mimicking the dancers he saw on the screen.

Since he’s never formally trained, it may be surprising to learn that Thomas is an award-winning choreographer and dancer with 20 years of experience.

Throughout his career, he’s owned a dance studio and worked at many others, helping thousands of students find their inner rhythm. He has also choreographed numerous West Michigan theater productions, and even toured with late singer Aretha Franklin.

When Thomas was in second grade, he participated in a talent show, which he said was when “the light bulb went off” that dancing was something he really enjoyed.

Thomas had one more epiphany while dancing in a sixth grade talent show, which sparked his desire to also become a choreographer.

He was supposed to impersonate Michael Jackson, but instead wanted to be Michael Peters, the professional who choreographed Jackson’s famous “Thriller” music video.

“I never wanted to be the star, I wanted to be the person behind the scenes making decisions,” said Thomas. “You have the ideas and create the moves, so the originality comes from that and that speaks to me. To be taught is OK, but I’d rather be the one who’s teaching.”

Since then, Thomas has developed his own style of dance and teaching called “Torreography.”

“It’s my version of what the vision should be,” Thomas explained. “Whenever I choreograph a musical piece, I want to pay homage to the original choreographer, creator and director, but I also like to put my own spin on it so when people see it, they know that was Mr. Torrey’s.”

Sharing the love of dance

Thomas owned a dance studio called T-3 Dance Elite in Grand Rapids for seven years and taught students of all ages different styles, including tap, jazz, contemporary, hip-hop, and aerobics. The studio offered a dance team that competed against other dance studios.

“I had been employed at other dance studios in the Grand Rapids area and I knew I could do this, too,” said Thomas.

A few of his students have advanced to dancing professionally.

“I have a cousin who has been on tours,” said Thomas. “He’s worked with Mariah Carey and made it to the top 16 on ‘So, You Think You Can Dance,’ so that was a proud moment.”

Although his studio closed in 2008, he still directs through his freelance company, T-3 Dance Productions.

Thomas provides choreography, instruction, coaching and consultations for dance studios and cheerleading teams throughout the Midwest with T-3. He’s also been hired to choreograph numerous theater productions in the Grand Rapids area.

He gets calls to choreograph many high school musicals, like Unity Christian High School’s 2018 production of “Newsies.” Thomas said that was one of his most memorable experiences to date because he helped students learn his favorite style of dance: tap.

“I had a lot of students who had never taken tap and I was blessed with a lot of athletes who were quick on their feet and the rhythm just came so naturally to them,” said Thomas.

Thomas shares his love of dance even at Grand Valley through teaching cardio dance classes as a certified Athletics and Fitness Association of America health and fitness instructor.

Thomas said he is thankful his Grand Valley supervisors and colleagues — first in Campus Dining in 2016, then Human Resources beginning in 2017 — have continually supported his passions.

“They’re very supportive of the arts and I think Grand Valley is an awesome employer because they want the work-life balance to work really well,” said Thomas. “The dance world is still a very big part of that for me, but this is my bread and butter.”

“You have the ideas and create the moves, so the originality comes from that and that speaks to me. To be taught is OK, but I’d rather be the one who’s teaching.”

The Queen of Soul

A career highlight for Thomas was the opportunity to dance side-by-side with Aretha Franklin during her self-titled tour in 1996 and 1997.

After successfully auditioning in Detroit, Thomas was hired as the tour’s principal dancer, the highest-ranking dancer within a professional dance company. The principal dancer typically assists the choreographer with teaching routines by learning all of the dances and coordinating blocking and staging.

During two numbers, Thomas danced next to the “Queen of Soul,” but the memories he holds near and dear from the tour are those from interacting with the artist off-stage.

“She was like a great aunt or grandmother,” recalled Thomas. “She was very compassionate, thoughtful, hospitable, personable, and overall just a good spirit.”

Franklin’s preference was always to travel via buses, which Thomas said meant frequent stops to enjoy their surroundings.

“It would take a long time to get anywhere because she would want to stop to eat, sight-see and buy things,” said Thomas. “I saw her personality that way and it was a nice bond. Did we get there on time for every show? No, but it was an awesome experience.”

'Dance is within you'

Thomas said he’s occasionally asked why he’s living and working in Grand Rapids instead of New York or Chicago or actively pursuing more touring opportunities. His answer is simple: “My life is complete.”

“When I had my business, I was fulfilled and it felt great to work with students, to push them and see them grow,” said Thomas. “I like to teach and be a part of that. I would love to tour again, but I’m fulfilled with my job here at Grand Valley and working with the different theaters in town.”

Thomas also wants to continue spreading his positive message to his students, and really anyone who will listen, that dance has the potential to be one of the greatest forms of self-expression.

“Dance is like music. It’s one thing that’s universal and that we can all relate to,” said Thomas. “Movement is just a part of who we are through song and dance, it’s an excitement. It doesn’t matter if you’re 7 or 77, dance is within you.”