Laker student athletes have proven themselves leaders in the community as well as on the playing field.

Led by the Student Athlete Advisory Committee, Grand Valley athletes have raised $10,000 or more in each of the past three years for Make-AWish® Michigan, the nonprofit organization that grants wishes to children with life-threatening illnesses.

Because of their hefty fundraising totals, Grand Valley had an opportunity to host a “wish reveal” and help plan the surprise for a wish kid. Carly Shisler, former president of SAAC and lacrosse midfielder, said it was easy to say yes to the reveal.

“Right away, we knew we wanted to do it at a football game, where the most people would see it and be involved,” Shisler said.

The Make-A-Wish staff identified a West Michigan child, Alex, and gave her family football tickets to the September 28 game against Michigan Tech. Shisler connected with the family at Lubbers Stadium and told Alex she was selected to play a video scoreboard game on the field during halftime.

“We were on the field with Alex at halftime when she learned her wish was granted and she was going to Disney World; it was incredible,” she said.

SAAC executive board members also wanted to sell Make-A-Wish wristbands in the football stands during the game, but the Grand Rapids office only had 100 wristbands. Shisler found a solution.

“So, the day before the football game, we’re up at 6 a.m. to drive to the Brighton office and pick up 500 wristbands and make it back in time for lacrosse practice,” she said. That extra effort netted about $1,800 in wristband sales for Make-A-Wish, she added.

Shisler, who earned a bachelor’s degree in marketing in April, said she got involved in SAAC as a first-year student because of the leadership of senior lacrosse players who, at that time, served on SAAC’s executive board.

As president, Shisler said she and other board members worked to create a sense of community among student athletes, encouraging their fan support from student athletes at all home contests. Two years ago, SAAC introduced the Anchor Awards, an awards banquet for all teams, and it has proven to be a strong Make-A-Wish fundraiser, she said. Other annual fundraisers include a Walk For A Wish pledge event and a dodgeball tournament. 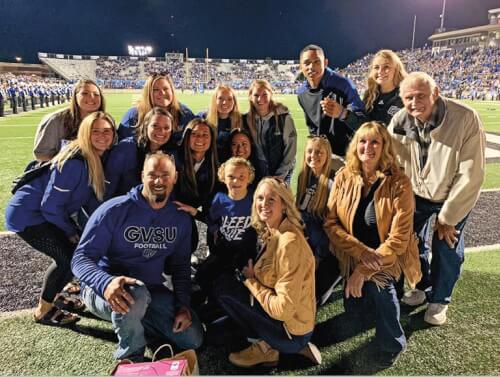 Wish kid Alex, with her family, is pictured with members of the Student Athlete Advisory Committee at a Grand Valley football game at Lubbers Stadium. SAAC has raised $30,000 in three years for Make-A-Wish Michigan. (photo courtesy of Spencer Haworth)

“We were on the field with Alex at halftime when she learned her wish was granted and she was going to Disney World; it was incredible.”

SAAC is able to donate all proceeds from events to Make-A-Wish because of a partnership with Northwestern Mutual, a financial services corporation. Walter Moore, associate director of athletics and SAAC advisor, said annual funding from Northwestern Mutual covers the operating costs for SAAC fundraisers; the corporation is a longstanding NCAA partner.

On the lacrosse field, Shisler, from Naperville, Illinois, was a consistent starter and among the top goal scorers. She said serving as SAAC president afforded an opportunity to learn the business side of athletics and improve her leadership and communication skills.

“It’s been great learning the operation side of things and getting to know people in the athletic and marketing departments. I’ve gained professionalism and learned more about event planning and fundraising,” she said.

The Make-A-Wish Foundation has long-standing relationships with many NCAA Division II institutions. Spencer Haworth, development officer for Make-A-Wish Michigan, said SAAC has elevated its fundraising efforts “above and beyond” many other organizations.

The average cost of a wish is $6,000; Haworth said when organizations like SAAC raise $10,000, it covers the overhead involved in granting a wish. “It’s been nice to work with these young leaders on campus,” Haworth said. “They’re busy, they are involved in practices, games and their studies and still make time to host fundraisers and raise money throughout the year.”

Make-A-Wish Michigan recognized SAAC’s fundraising prowess with its Sue Jandernoa Award at an appreciation banquet in April. Jandernoa is a current Grand Valley Board of Trustees member.