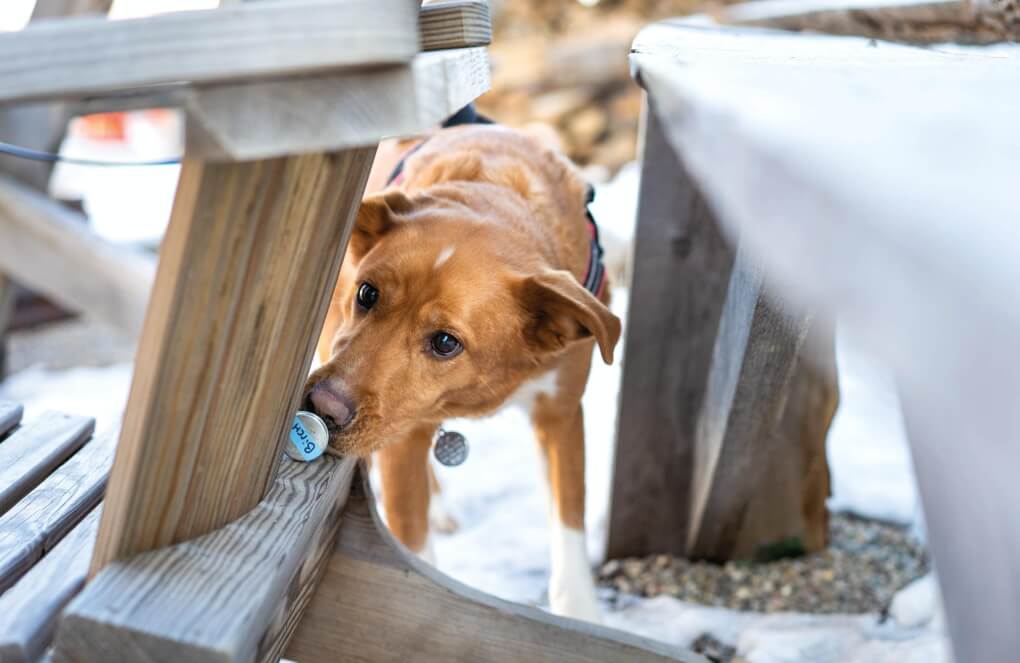 To most onlookers, the two rows of white, nondescript boxes lined up in a driveway wouldn’t seem to hold much significance.

But to the energetic rescue dog whose ears perk at an impossibly cute angle when anticipating treats, those boxes couldn’t be more significant. They mean it is time to go to work.

As Laurie Witucki, professor of chemistry, sets up the boxes, her dog Rue sits in the garage, a purposeful gaze affixed on the containers as she awaits her next step. Witucki then leads Rue to the boxes.

Upon hearing the search command “Find it,” Rue quickly sniffs at them, and then taps one with her paw. “Good girl!” Witucki calls out. And then Rue moves on, finding another box to tap.

Rue has found the boxes containing oils with specific smells, such as birch. The activity is part of a growing sport called canine scent work, or nosework, modeled after the training for dogs used in law enforcement or the military. Dogs competing in the sport are trained to locate essential oils hidden in containers or vehicles, in indoor and outdoor settings. 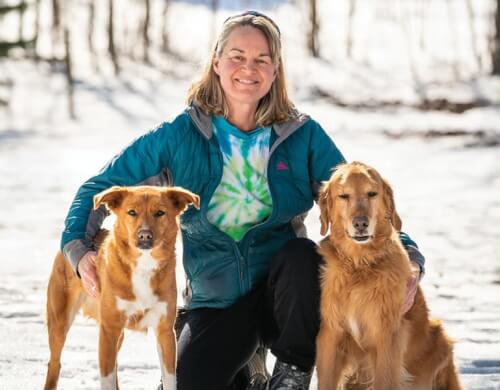 Laurie Witucki, professor of chemistry, with her dogs Rue, left, and Gracie. Both dogs are involved in nosework competitions.

That hobby also led to research by Witucki on the essential oils used for competitions and training, showing how a wide range of impurities within the oils, depending on the vendor, can affect how the dogs perform because the smells can confuse them.

Witucki knows scent is complex and dogs smell all of the components in a given substance, so she said the chemist in her had a theory for training. “I’m looking at what the dog is detecting through a scientist’s eyes,” Witucki said. “Is there a common chemical component in all of the essential oils that I could just train on?”

The result: “We didn’t find the magic molecule. We found a lot of different impurities.”

“A dog separately smells the bread, the sauce, the cheese and pepperoni. I was training him on a cheese pizza, asking him to find a piece of pepperoni.”

They compared those results to substances they freshly distilled by steam. They analyzed six oils used extensively in competition: birch, anise, clove, myrrh, vetiver and cypress.

The range of impurity levels was a revelation, Witucki said, adding myrrh is the most difficult odor to train with because the commercial oil sometimes contained 98 percent chemical solvent impurities.

The results also led to a resignation on Witucki’s part: She and other handlers in the scent work sport need to train on multiple commercial oils because they never know which one a judge will choose. Training on pure oils from a single source is not the best option due to variations, they discovered.

Johnson, a student researcher studying chemistry, was a high school student participating in the competitions when she first met Witucki. Once she started attending Grand Valley, Johnson was thrilled when Witucki approached her with a chance to conduct research on the oils, something she did over multiple semesters.

Myrrh became a problem for Johnson when one of her dogs, a constant winner, suddenly lost skills when trying to find the essential oil. She then learned through the research how impurities affected the scent.

“The analogy I use is that when you walk into a pizza place, you smell the whole pizza. A dog separately smells the bread, the sauce, the cheese and the pepperoni,” Johnson said. “I was training him on a cheese pizza and taking him to a show, asking him to find a piece of pepperoni.” 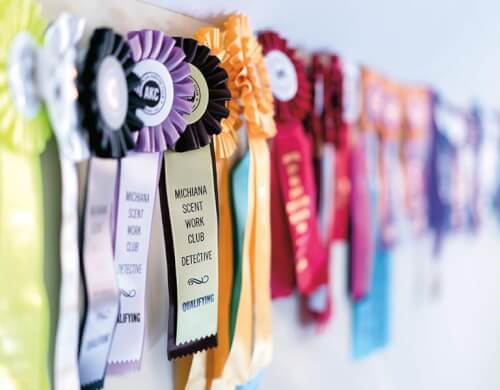 ("Rue") Rua Red Fitzpatrick is one of the nation's top dogs in the sport as evidenced by the ribbons lining the training room.

Johnson, who competes with three dogs — two Dutch shepherds and a rat terrier — said it was helpful for her to know the project from the perspective of the sport before she knew it from a chemistry perspective. She was able to take her new academic knowledge and apply it to something she already understood.

Witucki has plans to continue the research by testing dogs competing at a high level in a double blind study, setting out a low-quality oil and one of the discovered chemical impurities to see which one the canines hit on.

While this continued research is providing important data for a growing and popular sport, it has additional benefits, Witucki said. Students in her research lab and chemistry classes are learning about the processes for analyzing these substances. Also, as people use essential oils for everything from aromatherapy to dietary supplements, it’s helpful to know that oils have different levels of purity and they do not go bad.

Witucki said the research has also helped her foresee blending her scientific background with the sniffing prowess of dogs to potentially unlock more benefits for humans.

“As a scientist, how can I help make them better detectors?” Witucki said. “I see this research as a building block. Once I understand the chemicals in these oils and what dogs detect, are there molecules that they can also be trained on for the detection of things like cancer?”

For now, Witucki is enjoying finding out more about oils for a sport that she loves. While Rue, listed as a golden retriever/border collie mix but described by Witucki as “100 percent all-American adorable howler” is one of the sport’s top dogs in the nation, Witucki also competes with her 10-year-old golden retriever, Gracie, who is retired from agility competitions.

In fact, the sport is a beneficial, low-impact activity for those with a senior dog, said Witucki, who also believes it strengthens the bond between human and canine.

“Any dog can do it,” Witucki said. “It’s an accessible sport and dogs love to have a task. And it gives them something to do in Michigan winters.”