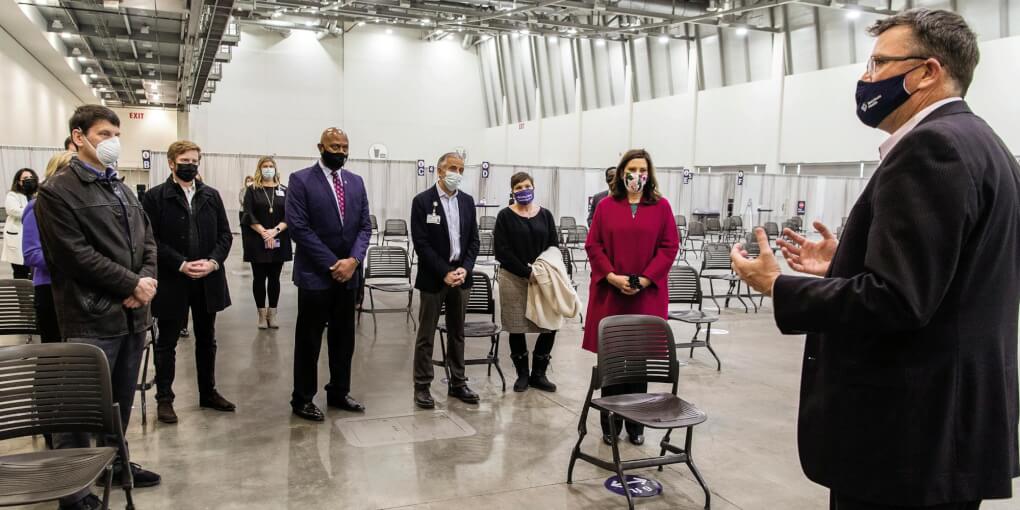 In top photo, Elizabeth Hertel ’00 stands behind Gov. Gretchen Whitmer during a tour of the West Michigan Vaccine Clinic at DeVos Place in Grand Rapids. (photo courtesy of Scott Thompson)

In late January as COVID-19 vaccinations began to roll out, Grand Valley graduate Elizabeth Hertel took the reins of the department charged with ensuring every Michigander who wants a shot will get one.

Gov. Gretchen Whitmer appointed Hertel director of the Michigan Department of Health and Human Services (MDHHS) on January 22, adding she is grateful for Hertel’s experience and leadership skills. Hertel had served as the department’s senior chief deputy director for administration. 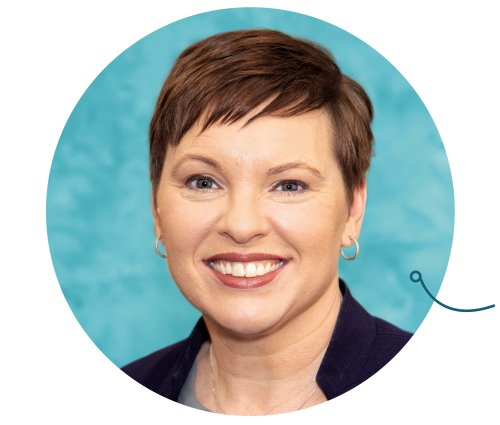 Elizabeth Hertel was named director of the Michigan Department of Health and Human Services in January. (photo courtesy of MDHHS)

“We are in the midst of a massive vaccination effort unlike many people have seen in their lifetime. Coordinating with the federal government and getting vaccines to the state and local levels has been a key piece of the logistical puzzle.”

Hertel earned a bachelor’s degree in public administration from Grand Valley in 2000 and later a master of business administration degree from Michigan State University. She joined what was then the Michigan Department of Community Health in 2013, prior to its merger with the Department of Health and Human Services, but her experience in Lansing (plus stints with Trinity Health and Blue Cross/Blue Shield) dates to 2005.

“One of the skills you learn quickly in Lansing is that you always work in teams,” Hertel said. “All our initiatives and projects are done only with help of other departments, other legislative branches.

“People approach a problem from their own experience, their own backgrounds and that is essential to developing health care policies and to understanding the environment you are in.”

Hertel admitted the early rollout of COVID-19 vaccinations was challenging, but said she is confident in the department’s ability to “get shots in arms.”

“We are in the midst of a massive vaccination effort unlike many people have seen in their lifetime. Coordinating with the federal government and getting vaccines to the state and local levels has been a key piece of the logistical puzzle,” she said.

In late winter, Hertel said the state was hampered by a limited supply of vaccines. She said when more vaccines are available, MDHHS will coordinate mobile clinics with Michigan’s National Guard and local health departments.

Hertel graduated from Rockford High School and called Grand Valley a good fit. Knowing health care was an interest, Hertel honed in on public administration after taking a class that focused on the organizational culture in Germany and eastern Europe during World War II.

“That class helped me to focus on a potential career. It really made me think about how the government can have such a broad effect on the way society behaves,” she said.

Hertel also participated in a study abroad program, which took her to the United Kingdom to study urban planning.

“Grand Valley has great professors. When I was there, our public administration program was smaller and it was no problem to talk to the chair of the department,” Hertel said. “I’m very grateful for my Grand Valley education and I am a proud Laker.”

At some point, when the pandemic eases and Hertel can catch her breath, she plans to shift her priority to recognizing the hard work of MDHHS’s more than 14,000 employees.

“I want to properly acknowledge how important they have been to keeping the state’s services going. This year has been so trying,” she said. “I’m working with an incredible team of people who are making a real difference in the lives of people in Michigan.”