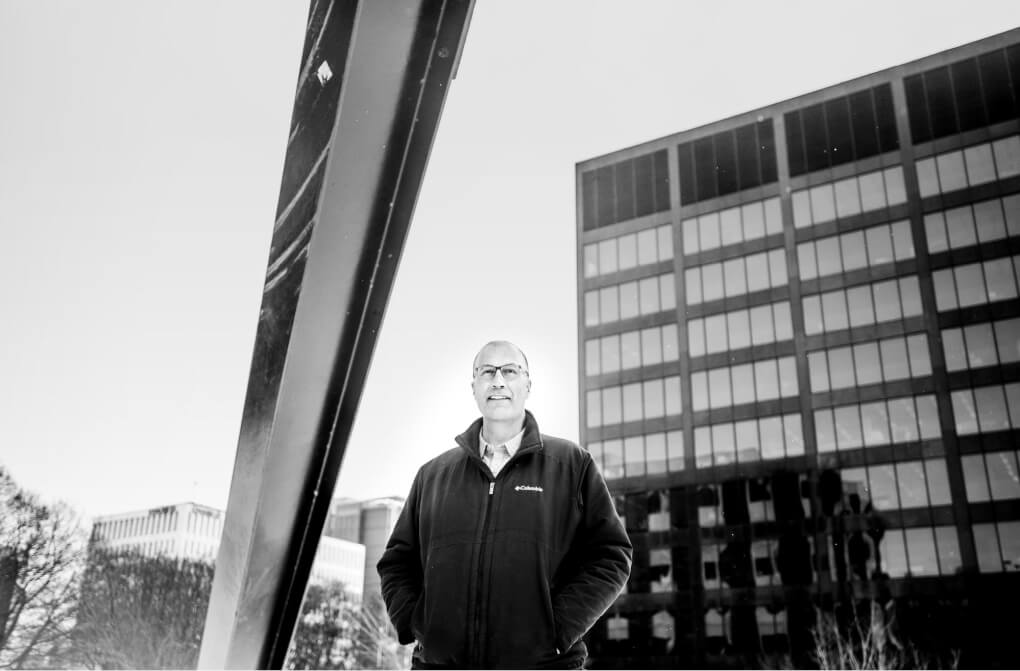 As David Austin prepared to meet with representatives from the City of Grand Rapids, he was armed with a plan and a sales pitch.

GVSU’s Mathematics Department was starting an applied mathematics direction to the curriculum. For his capstone project-based applied mathematics class, Austin, professor of mathematics, wanted to partner with the city to find trackable projects that students could work on to see how math can be used to help with real-world issues.

As he considered the partnerships he needed to develop for this class, Austin also pondered his sales pitch.

A mathematician who talks about his discipline in almost poetic terms, Austin also is keenly aware that the public perception of math can skew to the negative side. People are often intimidated by math, he said. He was prepared to sell its virtues.

Much to his delight at that first meeting with the Grand Rapids leaders, he quickly realized that wouldn’t be necessary.

“They told me, ‘We’ve been waiting for something like this for a long time,’” Austin said.

As he met with more potential partners in the business, nonprofit and government communities, he found the same positive reaction. 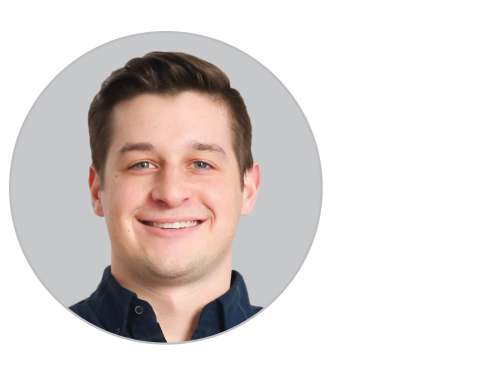 Ethan Boelkins ’20 took the applied mathematics capstone class and now works for the City of Grand Rapids as a data reporting specialist. 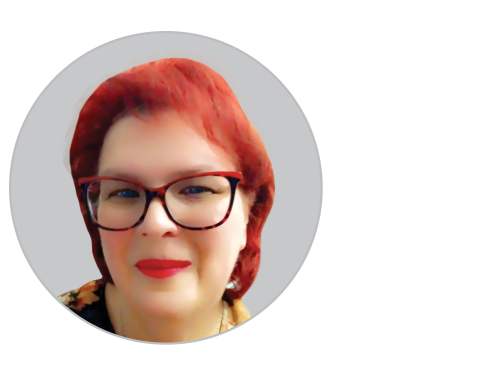 If that fateful meeting about three years ago had called for a sales pitch on math, though, Austin would have been the right person to do it.

A noted scholar and instructor, Austin was a recipient of the Mathematical Association of America’s 2021 Deborah and Franklin Tepper Haimo Award for teaching excellence and demonstration of influence outside of an educator’s institution.

Austin’s love for the theory of mathematics is deep. He uses terms like “aesthetically pleasing” to describe a mathematical discovery.

Still, he and his colleagues saw a need to evolve the department’s mathematics curriculum from one that was primarily theory-based to one that incorporated applied mathematics principles. That approach has helped to more fully prepare students for a wide variety of career options, he said.

As much as he loves theory, he is equally passionate about extolling the benefits of the practical side of mathematics.

“The amazing thing about mathematics is that we can come up with ideas in our imagination because we’re curious about them, and then we can use them to solve problems in the real world,” Austin said. “It’s not a firm line that divides applied mathematics from theoretical. Applied mathematics is an emphasis that develops students’ problem-solving skills so when they graduate they can assume a career that puts mathematical training to use.”

Working with the data that is pervasive in today’s world is one fulfilling career option, Austin said. But he quickly ticks off other opportunities for aspiring mathematicians.

Films by Pixar Animation Studios require extensive mathematics, he said, noting a number of published papers by mathematicians on the techniques they create to make animations better. Austin noted that, for instance, the process of getting Sulley’s fur to move in “Monsters, Inc.” requires mathematics.

One of the biggest employers of mathematicians is the National Security Agency, he said. “People have discovered that prime numbers give you a way of encrypting information in a powerful way,” Austin said. Those encryption skills are also in demand at businesses such as credit card companies and large retailers.

In health care, mathematicians can look at a patient’s information, such as height, weight, age and other factors, and assess the risk of disease, Austin said.

Students with theoretical mathematics backgrounds were already primed for successful careers, Austin said. Incorporating applied mathematics has made that training even more intentional.

The training that students are receiving from the partnership with the City of Grand Rapids has multiple layers, Austin said. Students are gaining valuable problem-solving experience, but the impact is even farther reaching.

They also are seeing how their work with data impacts community service and social justice, Austin said.

The first project with the City of Grand Rapids involved the students analyzing demographic information and ultimately writing software that pulled data from the Census Bureau and other sources to help the city more precisely target housing assistance, Austin said.

Austin’s 2021 class was charged with studying data on how residents communicate with the city. Students searched for trends and other insight, such as which neighborhood residents are more likely to appear in person with concerns, rather than call or communicate online.

City officials plan to use that information to create a better picture on how to allocate resources for contacts with residents, said Becky Jo Glover, chief customer service and innovation officer. Glover also said seeing trends can help the city target messaging to encourage residents who go through the hardship of traveling to City Hall for a task like paying a bill to trust a remote process.

Glover said the students in Austin’s class are providing a crucial resource by sharing analytical insights and visualizations that benefit city residents. The students’ work shows not just a snapshot in time but can also help with forecasting.

“I probably scared David, I was so excited when he approached us,” Glover said. “And the work they have done has not disappointed us. This has been one of the best experiences of my entire public service career.”

Noting “data is a big beast,” Glover said the students’ work helps both at a big-picture level and also a granular one. And each data point represents a person and a possible issue that needs to be addressed.

Besides being impressed with the caliber of students from Grand Valley, Glover also is glad to see the experience has helped students see the possibilities in working for the public sector.

One of those students is Ethan Boelkins ’20, who is now a data reporting specialist for the city. He said he works with internal and external data sources to put information in terms that are usable both for city officials as well as public-facing platforms.

He was part of Austin’s capstone class working with the city, and while he went into the work with an open mind, Boelkins said he wasn’t sure he would pursue a career involving applied mathematics.

But Boelkins said once he saw how valuable the analysis was to the city, he was inspired to see what future opportunities there might be for him in a setting where his expertise could make a difference. He started with an internship and worked into other roles.

“Looking at the world now and as the pandemic changes a lot of things, data is more in demand as ever, and people who can work with data and communities are more important than ever,” Boelkins said. “Where am I going to see the impact of the work I’m doing? That has always been obvious with the work I have done with the city; it comes right from the city residents.”

Austin said he is gratified that students are having these kinds of revelations through the applied mathematics community partnerships.

“I hear from students: ‘I had no idea you could use a math degree in this way.’ This has broadened the perceptions about what mathematicians could do,” he said. 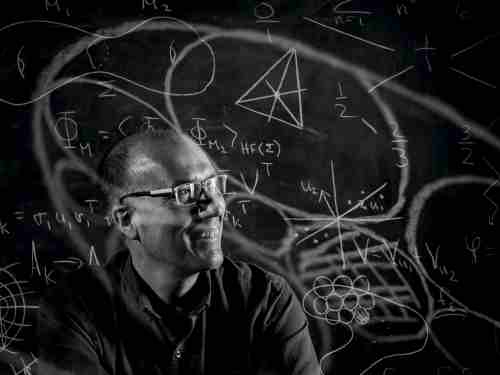 David Austin forged a partnership with the City of Grand Rapids to provide an opportunity for applied mathematics students to work on real-world projects.

In appreciation of mathematics, connecting us all

David Austin knows math feels unapproachable to many. He wants you to see its beauty through his eyes.

Or more specifically, through his eyes as a child, lying on the bed in his room, looking at the ceiling light and other geometrical patterns, and feeling pleased as he recognized how they’re related to each other.

“You can look at it and find a beautiful result a lot of times,” Austin said.

Even if you haven’t thought about the Pythagorean Theorem since high school, if you listen to Austin describe how this ancient theorem applies to us all, you understand why he sees beauty.

“If you have a triangle, and one angle is 90 degrees, and you know two of the sides, you can know the third side,” Austin said. “We have the capacity to figure things out with incomplete information. We can reconstruct something.

“The universe is knowable if we can understand it in that way. In that sense mathematical thinking makes me feel connected to something bigger than me.”

He said the effect he feels from pondering mathematics, from discovering patterns in something abstract to interconnected ideas in a complex problem, has an artistic quality.

If your mind flashes to a movie scene where a mathematician joyfully and with urgency is solving a problem by writing on a blackboard, Austin acknowledges that is apt.

“Mathematicians are motivated by beauty, mathematical discovery and a sense of wonder,” he said. 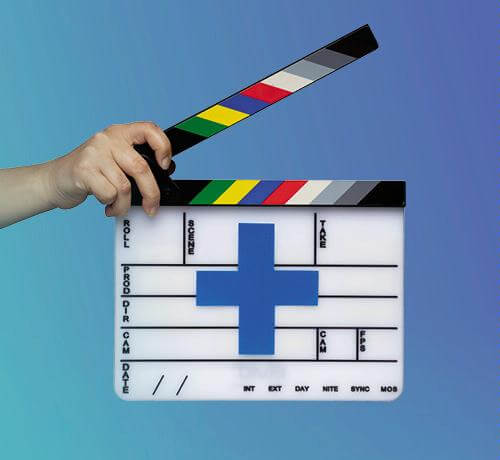 The unique training simulation paired health and theater students to practice delivering bad news to patients or their family members. 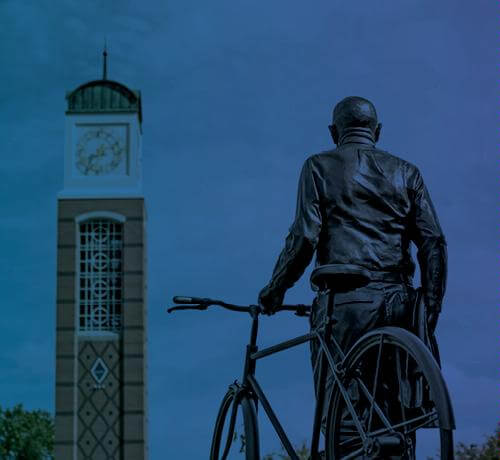 The university may have celebrated an anniversary, but it's the campus community members who received gifts in the form of untold stories.