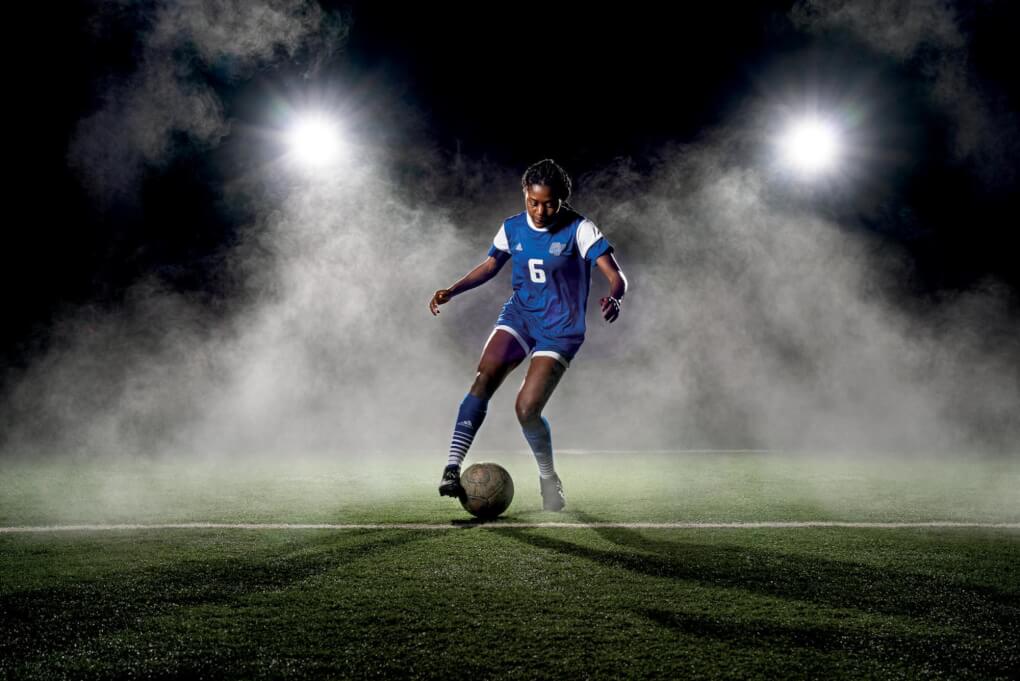 There was hope to carry that momentum into the 2020 season — until COVID-19 turned the world upside down.

“I’m really focused on bettering myself here — being more of an asset and a dominant ball player.”

Darline Radamaker said the team learned the 2020 fall season was canceled weeks before competition would have begun. In a flipped season, the Laker soccer team competed for the GLIAC title during the Winter 2021 semester but an NCAA decision halted all thoughts of a repeat national title.

Radamaker, a junior midfielder who is majoring in business marketing, said she’s focusing this season on what she can control: bonding with the team, bettering herself as a player and student.

“We were disappointed our season was taken away, but we’re not going to dwell on it,” she said.

Soccer has been part of Radamaker’s life since she was 7; it was one of the only sports she recalled seeing when she lived in Haiti. What started as playing for fun with friends turned into playing club-level when she was 9.

“I realized it created great opportunities for me,” she said. “I wanted to stick with it and see where it got me.”

Macomb, Michigan. Moved to the U.S. in 2005 and has dual citizenship in Haiti

POSITION ON THE TEAM

Biology lecture, she enjoyed learning with the classmates

Darline enjoys playing piano and has since she was 12. At home, her family has a pitbull-mix dog named Milo. In junior high, she received a “best female athlete” award.

Radamaker and her family moved to the U.S. in 2005; she is a dual citizen. In 2015, when she was in high school, she played for the Haitian National Team in the Confederation of North, Central America and Caribbean Association Football (CONCACAF) U-20 tournament.

That same year, she played at Ford Field in Detroit with the Haitian team against the U.S. women’s team, which at the time included 2015 World Cup champions Abby Wambach, Carli Lloyd and Megan Rapinoe.

Having visited GVSU several times because her older sister was once a Laker, Radamaker said she enjoyed campus and already knew some current students.

“I really like being integrated in a team and having a community here,” she said. “Before COVID, I enjoyed working with professors and other students in the smaller classroom settings.”

Another year of eligibility to play soccer is an option that Radamaker is considering as she navigates what her career path could be post-college.

“I’m really focused on bettering myself here — being more of an asset and a dominant ball player,” Radamaker said.