STORY by Peg West / PHOTOS BY AMANDA PITTS, unless indicated

As he created a commissioned mural on a block-long swath of pavement in downtown Grand Rapids to commemorate Pride Month, Joey Salamon ’10 didn’t have to look far, even in his mind’s eye, for reminders of his strong connection to Grand Valley.

He gazed at landmarks that reminded him of his time as a student living nearby. He greeted a retired faculty member who arrived at the location to show support and see how the project was taking shape.

And he pondered the synchronicity of creating a mural to recognize Pride Month in the same community where he decided as a Grand Valley student to live his truth and come out as gay. He said that history gave special meaning to this work.

The mural, named “Rainbow Road,” is on Sheldon between Library and Fulton streets. City leaders said the piece, which was funded by the Grand Rapids Downtown Development Authority, is the most extensive street mural installed in the city.

Salamon brushed road-marking paint one color at a time to complete the piece that incorporated the rainbow symbolism associated with Pride Month as well as his own geometric, abstract elements to represent everyone’s uniqueness.

“If someone’s walking past and sees it and doesn’t know the meaning behind it, they’re probably going to think it’s just a cool piece of street art,” said Salamon, who now lives in the Detroit area and works as an artist. “Once they find out it’s specifically made for Pride, I hope they see the process of individuality by using the rainbow flag in a unique way.” 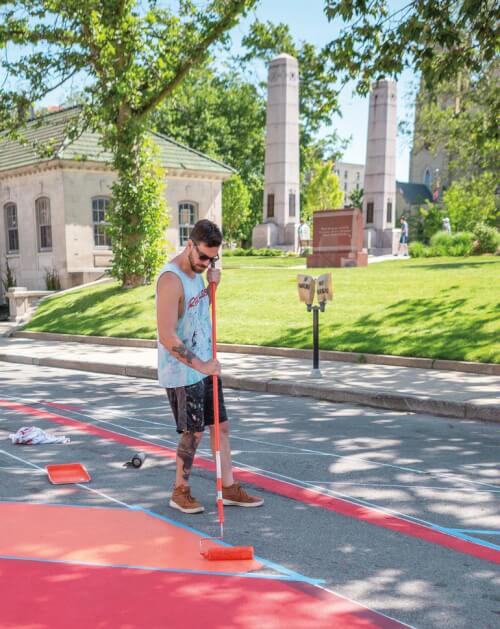 He said he tends to use rainbows and prisms in his other pieces, so this work was a different way to present those images. He also was inspired by the large-scale, public nature of this art. Creating such pieces was in the back of his mind when he pursued a degree in art and design.

“Murals were definitely on my radar as something I wanted to do, but back then I didn’t know how to even start doing that,” he said.

Retired faculty member Ed Wong-Ligda, who visited with Salamon as he painted the mural, is not surprised that his former student created such a large-scale, public project. In fact, he predicted it would happen.

In a written review of Salamon’s senior project in 2010, Wong-Ligda wrote this: “I see you as someone who can initiate activity and work with groups to create compelling art. Someone who swoops down on a community, shakes things up and moves on, leaving a rich experience and interesting art in your wake. I can easily see you pursuing artist-in-residencies, community-based projects and politically based projects.”

Wong-Ligda, who retired in 2015 as a professor of art and design and coordinator of the illustration emphasis, praised Salamon as a student artist who took chances, such as the time when he was creating art using only stickers.

“He worked larger than most would in the illustration emphasis and he did completely idiosyncratic work,” Wong-Ligda said. “He always had a very original mind. The pieces didn’t always work but he was out there doing it. I find my best students fail sometimes and then really succeed sometimes.” 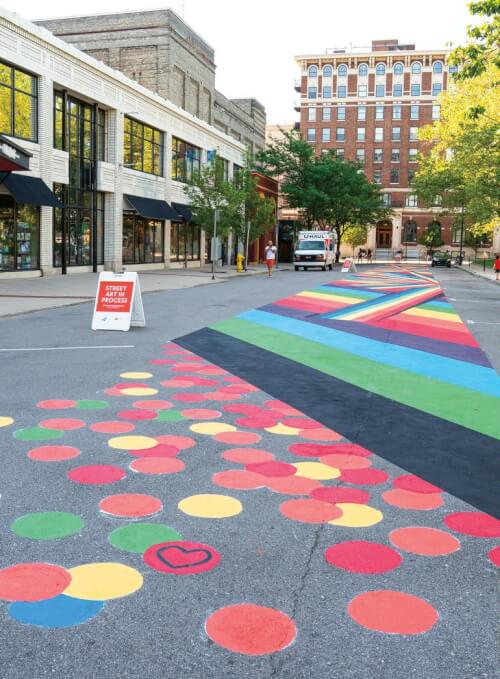 Joey Salamon incorporated his own artistic elements to represent individuality into the mural on Sheldon Street. The mural was funded by the Grand Rapids Downtown Development Authority.

Salamon was grateful that Wong-Ligda visited him and for the support, which he said was indicative of the atmosphere he experienced as a student who spent most of his time at the Calder Arts Center. Salamon immersed himself in an environment that he said was LGBT-friendly, which provided the comfort that helped enable him to come out, as well as inspired him as an artist.

His path after graduation has taken him throughout the United States. He works on freelance projects that have progressively grown in scale to murals and also owns three Detroit-area restaurants with his partner, Matt Buskard. Salamon handles interior design and branding for the eateries.

The mural, commissioned for Grand Rapids, was the first time Salamon had ever created such a piece on pavement. One of the aspects he enjoyed during his week in installing the piece was interacting with passers-by or even those who ended up helping with the work.

“People were stopping to talk about it with me and taking pictures,” Salamon said. “Everyone was great and excited to see it go up.” 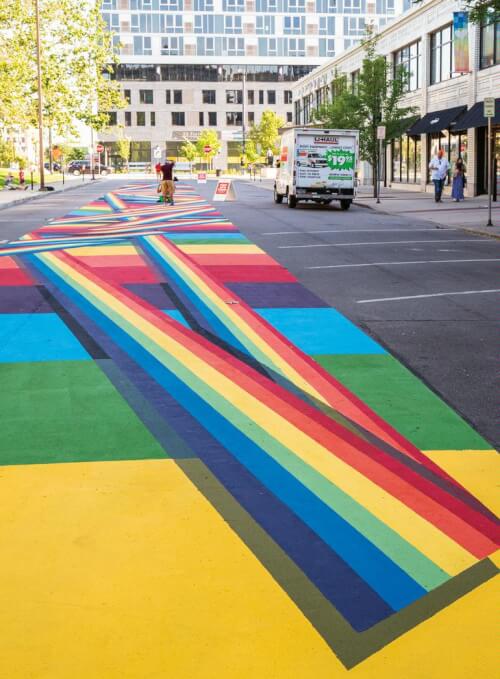