Melissa Garland skates to the middle of the ice at Griff’s Georgetown arena and poses as she awaits the opening finger snaps from Queen’s hit, “Killer Queen.”

As the music plays, she starts gliding across the ice, picking up speed shortly into the first verse: “’Let them eat cake,’ she says, just like Marie Antoinette.” 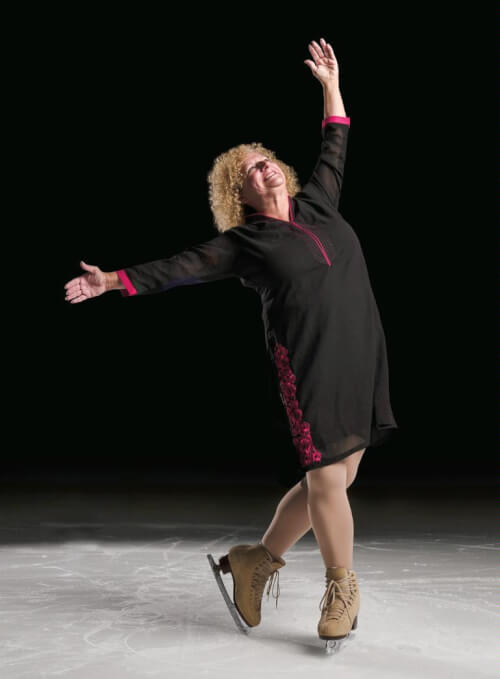 Garland throws back her head and right hand with theatrical flair to match the lyric’s cheeky mood. But there’s something more. On her face is a look of both joy and serenity.

Garland is in her happy place.

Practicing the routine is a regular pursuit for Garland as she prepares for the adult competition season in a sport that has long captivated her.

Her route to the ice was an unconventional one. As a child, she was inspired by 1976 Olympic figure skating champion Dorothy Hamill and fell in love with the sport at an age when many skaters start. But she needed corrective footwear, which meant she couldn’t skate.

Then at age 28 she was watching a competition where the oldest skater at the event was one year younger than Garland. Her interest rekindled, then was stoked by a friend who mentioned adult classes for beginning skaters. She started the classes, and once she figured out how to skate backward, she knew she could move forward.

“It’s just been me chasing tricks and skills for the next 22 years,” said Garland, the adjunct marketing communications coordinator for Institutional Marketing.

Garland has immersed herself in a sport that she believes has given her so much. She grabs ice time to practice her routine for adult skating competitions and is continually striving for the next level. She travels around the country to skate in competitions and around the Midwest to judge them. She also is advisor for the Grand Valley synchronized skating team, a women’s club sport.

Her judging duties run from non-qualifying basic skills and club competitions to high school, collegiate and recreational national events such as State Games of America.

“The heart that some of these kids at the local and regional level can display speaks volumes to the beauty and quality of our sport. I want to respect and honor that by doing the best job I can in judging.” 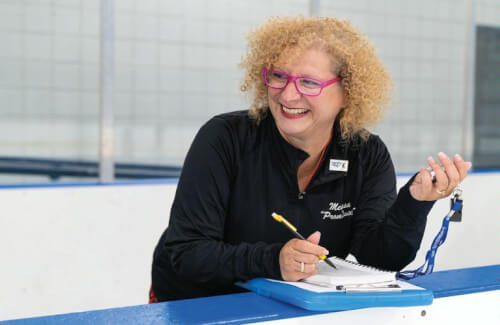 Melissa Garland both skates in competitions and judges them while also serving as an advisor for Grand Valley’s synchronized skating club.

She also has evaluated skaters who have gone on to compete at the national and international levels.

“I judge out of a sense that I want to and I need to contribute to my sport,” Garland said. “You get the best seats in the house, and some of the best skating I have ever seen has never been on television.

“The heart that some of these kids at the local and regional level can display speaks volumes to the beauty and quality of our sport. I want to respect and honor that by doing the best job I can in judging.”

Garland’s own heart for the sport also led to her advising the synchronized skating club. Her role includes mentoring the athletes, giving individual encouragement on academics and advocating for the club sport on campus.

“I love the camaraderie of the team and I love seeing these athletes achieve their skating goals at the collegiate level,” Garland said. The team’s recent achievements include winning both the 2017 and 2019 Tri-State Synchronized Skating Competition as well as silver and bronze medals at other contests in the state. Garland created an “Earn Your Anchor” award to commemorate the championships.

The sport’s built-in camaraderie and support have also sustained Garland through trying times. The adult figure skating community was there for Garland and her husband, David, when their son, Will, was born prematurely in 2009 and spent 85 days in the hospital. She also felt bolstered when her father died in 2012 and through her own health challenges.

And when she gets her time on the ice, she is reminded of what made her love the sport in the first place.

“There’s just a freedom to it,” she said. “Sometimes you can see your reflection in the hockey glass, there’s beauty in your movement and you get excited about it.”

One of her favorite moments on the ice is a basic one, but one shared by anyone who skates, no matter the level. It’s the first stroke to gain momentum on the ice, allowing Garland to feel the power of skating. When done effectively, she said, she quickly picks up speed, leading to her hair flying back, eyes tearing and her face tingling. She said she loves the sensation and the connection she feels in that moment to everyone in the sport.

“Whether you are a recreational skater, a competitive one or an Olympian, it all starts with that push,” she said.