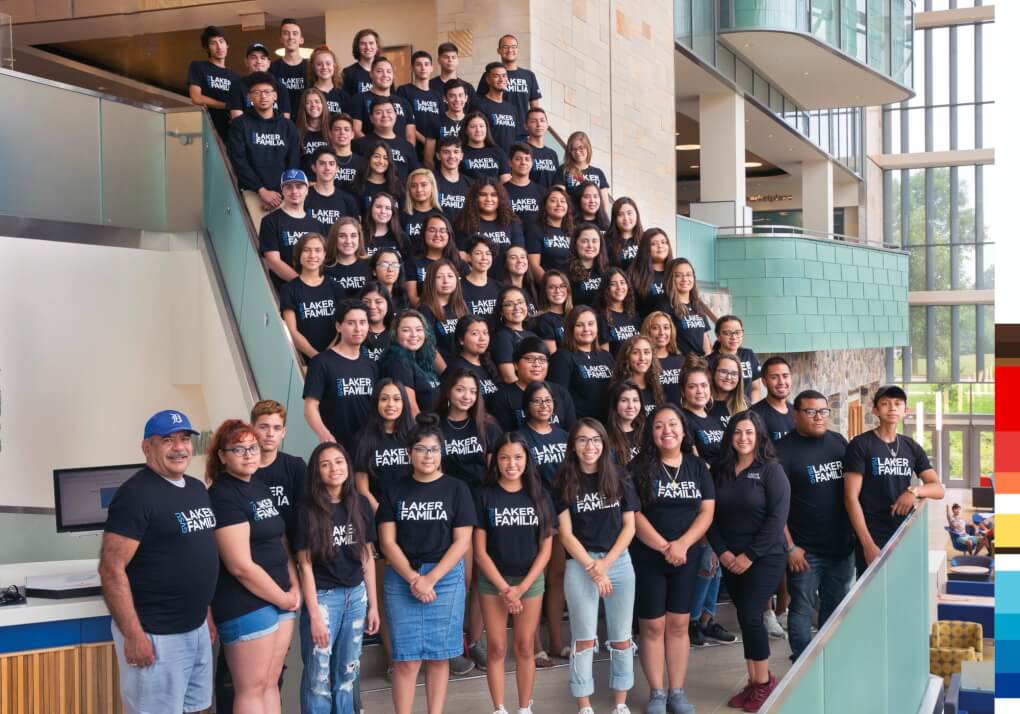 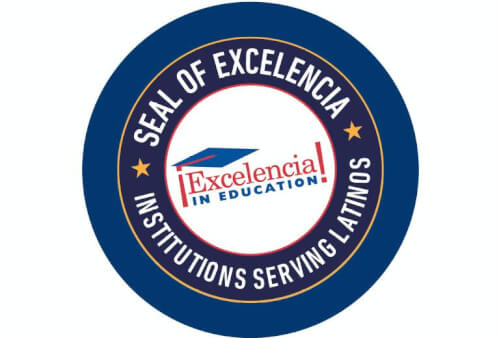 Rebeca Barajas grew up in Grand Rapids and said she had ambitions to attend college “far away from home” until she reached the end of her senior year at City High School.

“I had this sudden realization that I didn’t want to be that far from home, I’m very family oriented,” said Barajas, a junior who is majoring in behavioral neuroscience.

After she enrolled at Grand Valley, Barajas found about 100 extra family members when she attended an orientation program, Laker Familia, specifically designed for students who identify as Latino or Hispanic. Now in its sixth year, Laker Familia Orientation was among the initiatives university leaders established to help recruit, then retain, students from the growing Latino population in West Michigan.

It’s among the reasons Excelencia in Education, based in Washington, D.C., awarded Grand Valley its Seal of Excelencia in June. The nonprofit organization recognized nine colleges and universities with a seal for their commitment to serving Latino students; Grand Valley is the only institution in the Midwest, the other eight are located in border states or in the South (see sidebar).

Jesse Bernal, vice president for Inclusion and Equity, said receiving the seal was both a testament to the university’s culture and a responsibility.

“The seal recognizes how administrators and faculty members can come together to think intentionally and deeply about how we can create a better experience for our students,” Bernal said. “It also symbolizes a responsibility we now have to ensure we continue to learn from and engage with our diverse students.” 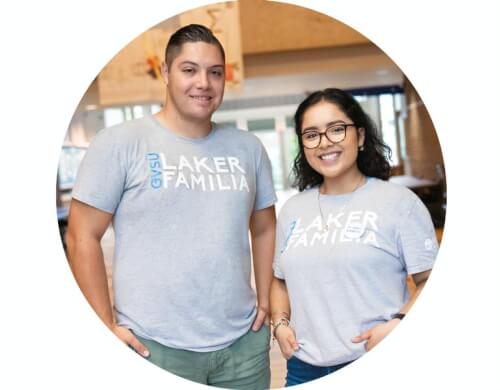 Adrian Hall, left, and Rebeca Barajas assisted with Laker Familia Orientation in August after participating in the program as first-year students.

Maria Cimitile was working as associate provost in 2009 and, recognizing the population shift, began organizing a campus task force to ensure Grand Valley was ready to serve an increased number of Latino students. The Latino Student Initiative (LSI) included leaders from student service offices such as Admissions and Financial Aid who began meeting biweekly.

Cimitile, now provost and executive vice president for Academic and Student Affairs, said the LSI task force worked to change both university policy and its climate. In-state tuition was offered to undocumented students, focus groups were held, demographic research from Grand Valley’s Johnson Center for Philanthropy was analyzed and admissions and financial materials were translated into Spanish.

The last tactic, translation, proved critical. Cimitile said some parents do not speak English but they still need access to campus information. “We knew from the research and focus groups that a student’s family comes to campus with them, family is very important in the Latino culture,” she said.

It’s the “familia” in Laker Familia. 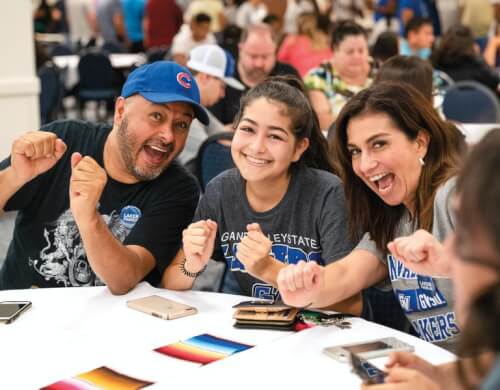 A student and family attend a lunch during Laker Familia orientation.

Emphasizing “familia” in the title of orientation was intentional as was creating programming that included parents, guardians, siblings and grandparents during the first day of the three-day program.

Barajas remembered receiving a letter inviting her to attend Laker Familia. The youngest of three siblings, she was the first to attend college. Barajas’ parents met while living in the same small town in Mexico; her mother finished middle school and her father is a high school graduate.

“They wanted to come here to have a more stable life, and as I got into high school they pushed the idea of college on me because I kept telling them I love biology and my science classes,” she said.

Last August, on the first day of orientation, Barajas relayed that same story to nearly 100 students and their families in the Haas Center for Performing Arts. She told the audience her memories of coming to campus by herself because she was a commuter student.

“The first day I was a nervous wreck because the other students were with their families, but the following days were better and we got to know each other quickly,” she said.

Adrian Hall applied to Grand Valley and three other colleges during his senior year of high school in Corunna. He said getting the Laker Familia invitation in the mail clinched his decision.

“When I got the orientation letter, I felt comfortable,” said Hall, who is majoring in allied health sciences. “I was a little hesitant at first because I never got exposure to the Latino culture in high school.” 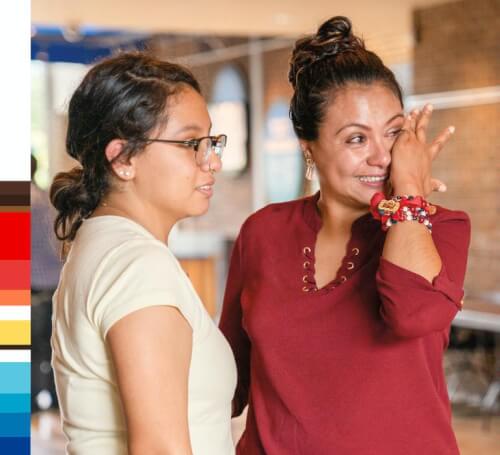 Monica Lopez, left, says goodbye to a family member at the end of orientation.

He arrived at orientation with his parents. “My mom cried when they left. She texted me later and said, ‘Sorry, I didn’t mean to cry,’” Hall said.

After families and guardians leave, ice breaker activities and panel discussions about college life begin. Hall said it was helpful to hear from faculty members and understand what they expect in their classes. Following Laker Familia and Black Excellence Orientation, which serves students who identify as Black or African American, all first-year students participate in Transitions orientation. Hall said by the time he got to Transitions, he felt like he had a leg-up on others.

“You hear the same messages about financial aid and faculty expectations at Transitions but it’s good,” he said. “Right after my parents left, I felt so comfortable. I loved being away from home. Right away, I knew about 90 students to say ‘Hi’ to when I saw them on campus.”

As an orientation leader, Barajas facilitated student discussions and said she has talked frankly about campus life.

“I do tell them that sometimes you will be the only student of color in class, but I never received any negativity,” she said. “I also tell them how proud I am of them, I say, ‘This is the first step, you got to college.’”

“We had started to see the relationships students developed, with each other and with others on campus.”

Laker Familia expanded beyond its original three-day program quickly as the initial cohort of students who attended orientation in 2014 took it upon themselves to continue meeting periodically throughout the rest of the academic year.

Salvador Lopez, associate director for admissions, was asked to chair Laker Familia in 2015, the first year of expanded programming. He and other task force members worked during that year to connect students with faculty/staff mentors and to campus employment, in addition to planning regular meetings that culminated in attending a national conference. “We had started to see the relationships students developed, with each other and with others on campus,” Lopez said.

Relationship-building was the foundation and has since remained at the heart of the program.

Because Laker Familia represented a wide range of campus departments, Lopez said odds were good that “someone knew someone else who was looking for a student employee.” Barajas, for example, has worked in the Office of the Provost for two years, following Lopez’s tip to apply.

Adriana Almanza is the assistant director for the Office of Multicultural Affairs and serves as chair for Laker Familia Orientation and co-chair of the Latino/a Faculty Staff Association. She, too, has recommended students for on-campus employment but the connections did not stop there.

“We have always directly referred students to specific people in departments to answer their questions,” Almanza said. “It’s not, ‘Ask someone in financial aid,’ it’s ‘This person in financial aid can help you.’ It’s the relational aspect of the program.” 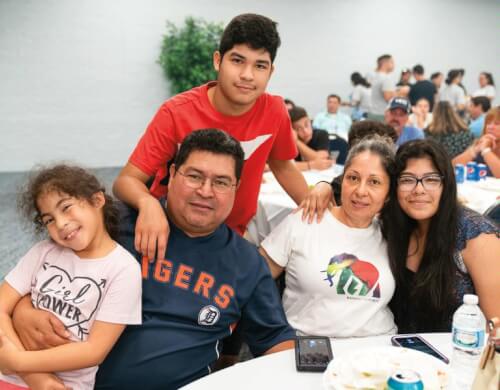 It’s not a secret that students who feel connected and supported on campus will be more successful. After the intentional efforts of LSI and Laker Familia, Grand Valley now ranks third in Michigan for the number of Latino students who earn bachelor’s degrees.

The number of Latino faculty members has increased 20 percent, and staff members 50 percent since 2015.

The nine institutions that received the seal from Excelencia in Education graduated 5 percent of all Latino students enrolled in U.S. colleges. Nationally, the number of Latinos who have earned degrees is behind other racial and ethnic groups. Excelencia reported 23 percent of Latino adults have earned an associate’s degree or higher, compared to 47 percent of white and 32 percent of African American adults.

Cimitile said the work accomplished by the LSI task force has made positive impacts on university culture, as she expected it would.

“If we are not serving our community, we are not living up to the integrity of the university and are not fulfilling our mission to the community,” Cimitile said.

“I do tell them that sometimes you will be the only student of color in class, but I never received any negativity.”

Rebeca Barajas, junior who is majoring in behavioral neuroscience

Staff members involved in Laker Familia recognize their work is not done. Lopez said it is sometimes challenging to get first-year and new transfer students to understand how the orientation program can assist them because they don’t view themselves as Latino.

The Laker Familia model has been tweaked to serve other diverse student groups. Organizers held the third annual Black Excellence Orientation in August and the two orientation programs had some cross-over events. Bernal said initiatives are underway to serve Native and Asian American students.

“The best asset an institution has is students. They are at the cutting-edge of thinking and experience, they are most qualified to know how best they learn and engage, they possess knowledge that is often untapped,” Bernal said. “Our initiative efforts leverage our students as the assets they are, and for the benefit of all our community.” 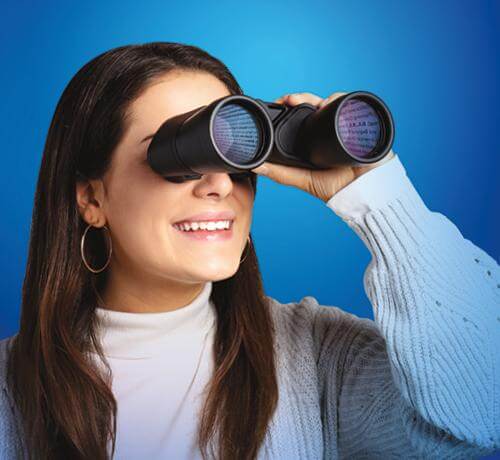 It's OK to go Explore(atory)

Exploratory study gives students who have not declared a major a plan and a positive outlook. 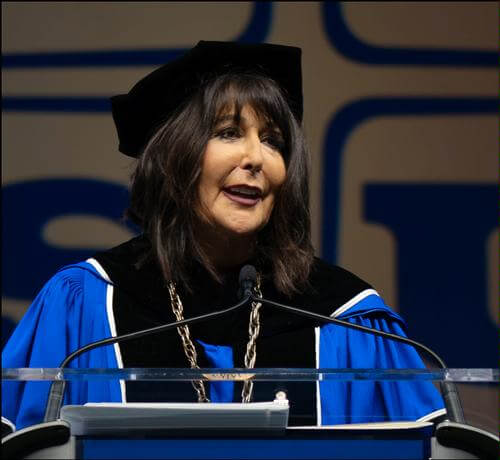 Philomena V. Mantella announced two initiatives that will strategically position Grand Valley into what she called a "breakout university" during her investiture address November 15. 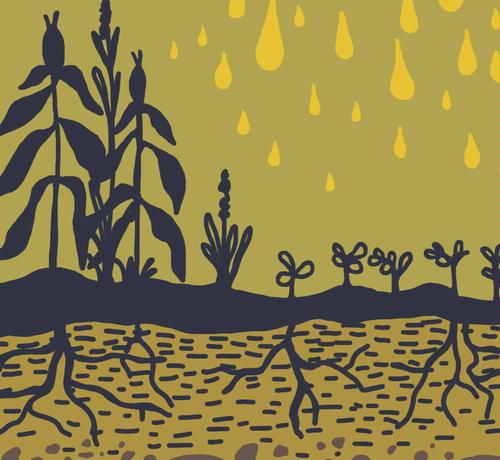