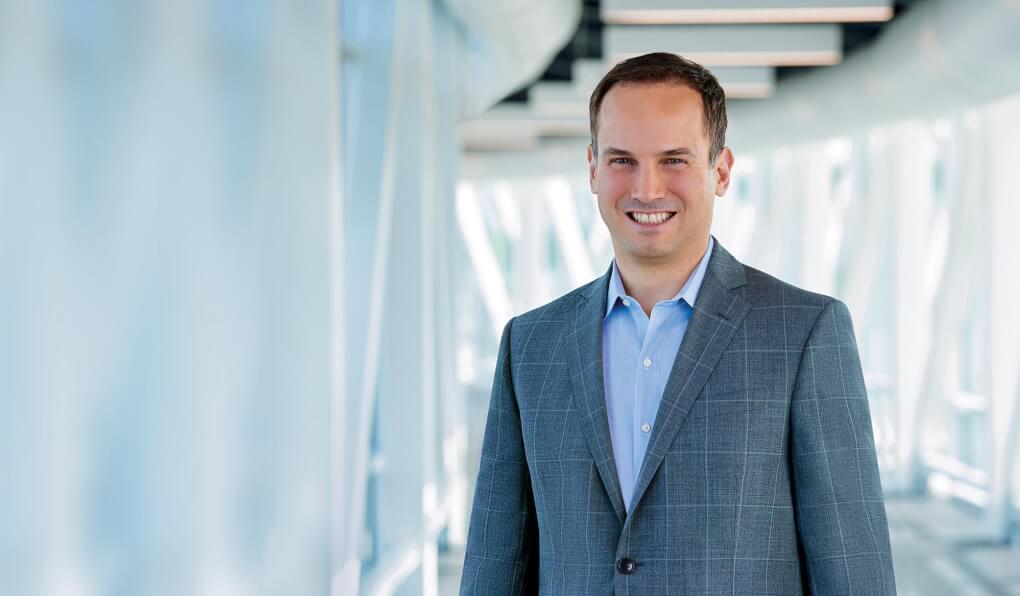 “If you’re a Laker out on a boat, it’s really important to have an anchor and an engine,” said Aaron Radelet ’98. “Grand Valley provided me with both.”

The anchor Grand Valley provided, Radelet said, was the grounding nature of the values-based West Michigan community. He also found merit in the university’s emphasis on purpose, public service and connection to community — values he carries with him every day.

Radelet said the engine Grand Valley provided was, in general, the drive and energy to always continue learning, propel yourself forward and apply what you learn in as many ways as you can. Specifically, Radelet pointed to a former faculty mentor, Fred Chapman, in the Advertising and Public Relations program. Chapman encouraged Radelet to choose a global public relations firm in Detroit for his first job after graduation, rather than the more comfortable choice of a local firm near campus.

That encouragement propelled Radelet on a career course that included working in communications for several Fortune 100 companies. He spent eight years at Hilton Worldwide during a time of unprecedented growth for the company, serving as the chief communications officer and senior vice president. Radelet is now the first global chief communications officer and senior vice president at Walgreens Boots Alliance (WBA), which was recently listed as one of Time’s 100 Most Influential Companies. WBA employs more than 450,000 team members and operates in 25 countries, including Walgreens, Boots and Duane Reade pharmacies.

Radelet joined WBA in July 2019 to lead communications and corporate branding and help the company best communicate its mission to “help people across the world lead healthier and happier lives.” He certainly had no idea the challenge ahead: the COVID-19 pandemic.

“Even before we went into the pandemic, we knew that one of our goals was to better communicate the vital role that WBA plays in our communities. We’ve always helped people lead healthier and happier lives,” Radelet said. “But then, all of a sudden this pandemic hit and our sense of mission was even greater. The role our business plays in helping save lives was more front and center than ever before.”

“I was visiting the Allendale Campus just last year with friends and it made me quite proud to see the LGBT Resource Center on campus; to see the physical representation of how that organization has evolved.”

During a time when many people worked from home, WBA expanded its in-person responsibilities. Stores remained open so customers could continue receiving a prescription or picking up medication for a sick child. Later, stores provided critical COVID-19 testing and vaccination services.

Radelet and his communications team needed to help inspire the WBA employees throughout the pandemic; he said they intentionally increased their efforts to celebrate their work and show the company’s appreciation. More stories of frontline employees were shared on social media, news outlets and TV shows. More awards and recognitions were given internally.

“I’m very proud to say that even though team members were understandably worried about their own safety and the safety of their families, our employees’ overall job satisfaction and morale actually went up this year,” said Radelet. “This is what our annual team member survey showed. COVID-19 presented challenges, but our team members were even more motivated by a strong sense of purpose.”

WBA was also widely recognized as a corporation that has led the way during the racial justice movement. The announcement of Roz Brewer as the new CEO attracted far-reaching attention, as WBA became the largest company ever to be led by an African American woman. Radelet said he finds it particularly rewarding to report directly to Brewer, as well as help with the company’s Diversity, Equity and Inclusion (DEI) efforts by serving as the executive sponsor of WBA’s LGBTQ business resource group.

Leading a global communications team during a worldwide pandemic unquestionably requires strong leadership skills; skills Radelet said he cultivated while at Grand Valley by participating in Alternative Springs Break, serving as a Resident Assistant for Pew Living Center and as a member of Student Senate.

When Radelet was a student senator, funding for the LGBTQ student organization on campus — at the time called 10% of You — was about to be pulled. The organization struggled to have four student leaders, a requirement then.

Radelet decided to be the fourth student and joined 10% of You to prevent any funding loss. That led to all sorts of questions from his peers, he said, and around that time Radelet came out as gay. Today, he’s thankful that the small organization has grown into the Milton E. Ford LGBT Resource Center.

“I was visiting the Allendale Campus just last year with friends and it made me quite proud to see the LGBT Resource Center on campus; to see the physical representation of how that organization has evolved,” he said.

Radelet advises everyone to come out of their closets, LGBTQ or otherwise.

“Everybody has closets in their lives that hold them back, that they’re stuck in. Be who you are. Be open and transparent with people. Life is much more enjoyable that way,” Radelet said.

As he’s grown a global career, led a thriving team through a pandemic and continues to support DEI initiatives, Radelet said he uses lessons he learned at Grand Valley on a daily basis.

Yet, there’s one lesson he said he has taken especially to heart: “As a Laker, don’t be afraid of the open water there’s so much to see and experience out there.” 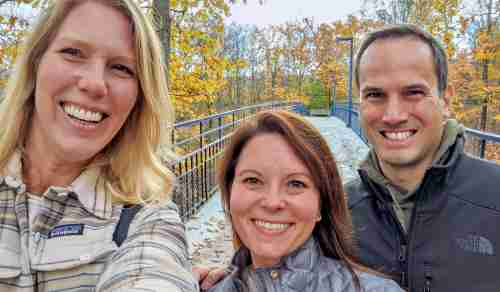 Pictured from left are Christine (Grohowski) Nicometo ’99, Jennifer (Vanse) Talluto ’96 and Aaron Radelet ’98 on the Allendale Campus in 2020. Nearly 25 years after leaving GVSU, the three friends have taken a trip together every year. (courtesy photo)