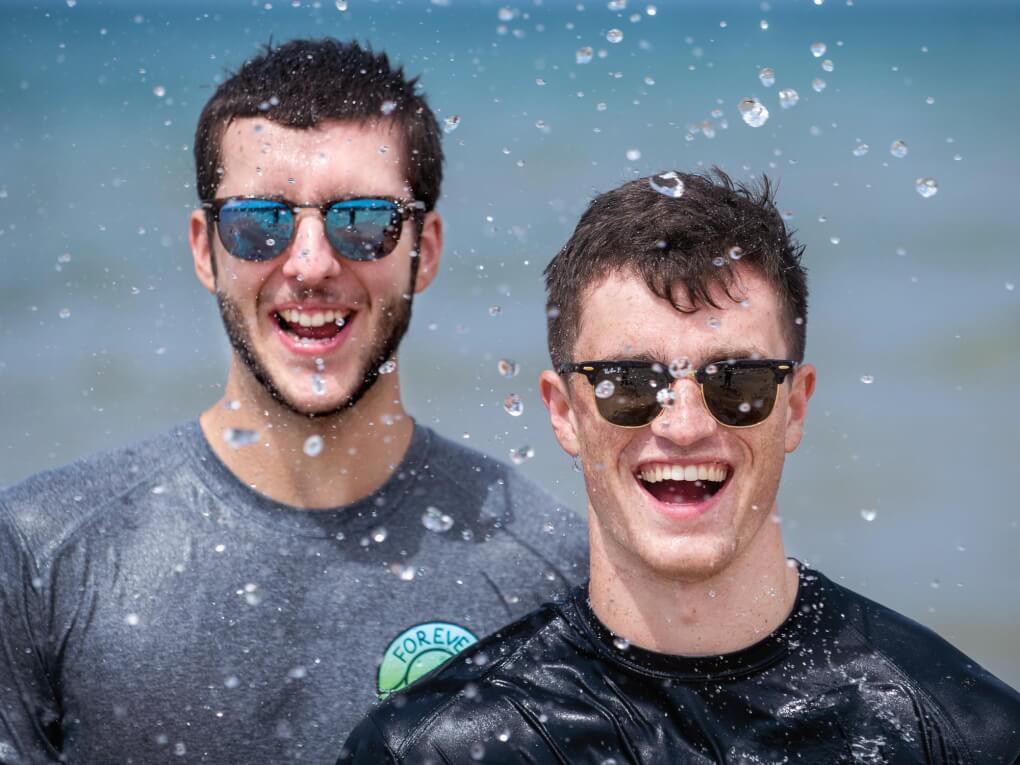 When Jack Kleinrichert and Chad Howell became neighbors in the Holton-Hooker Living Center during their first year at Grand Valley, they didn’t expect to launch a clothing company together several years later.

But one hike on Lake Michigan in fall of 2020 changed everything.

During the hike, Kleinrichert and Howell came upon a portion of the beach covered in plastic and other litter.

“That was the first aha moment for us,” said Howell, who has a double major in marketing and finance. “We’ve known that pollution is a real thing, but the magnitude of seeing it first-hand got us interested. We started to do more research and really found out the severity of the issue and from there it just kind of snowballed.”

This curiosity evolved into Forever Great, Kleinrichert and Howell’s clothing company, which sells apparel made from 100 percent recycled materials.

Forever Great operates on the mission of preserving the Great Lakes by raising awareness of plastic pollution, being part of the solution within the clothing industry and becoming a voice for change.

The company launched its first line of clothing on April 22, which was Earth Day. Forever Great sold out of their initial inventory within the first three days of launch, which Howell said far surpassed their expectations.

Kleinrichert and Howell participated in the 77 IdeaLab, part of the Richard M. and Helen DeVos Center for Entrepreneurship & Innovation in the Seidman College of Business. The lab provides financial support and mentorship for entrepreneurs as they develop and launch a business in one semester.

“The mentors in the 77 IdeaLab were great, and it was so helpful to be surrounded by other entrepreneurs,” said Kleinrichert, a double major in marketing and management. “We were all on the same journey together.”

Being built on the idea of driving positive environmental change, Forever Great hosted multiple beach clean-ups along Lake Michigan throughout the summer of 2021, and committed to donating 8 percent of Forever Great’s profits to the Alliance for the Great Lakes.

Currently, the recycled materials are sourced from a supplier out of North Carolina.

To create the clothing, plastic is removed from the environment, melted down and made into polyester yarn to be woven into fabric.

In the future, Forever Great hopes to be able to remove plastics from the Great Lakes, in order to further support their goal of preserving the lakes Keinrichert and Howell know and love.

As for what’s next for the two founders after they graduate in 2022, they’re ready for whatever direction life throws their way.

“Forever Great definitely plays into all of the skills that we’ve developed at GVSU, so I think it might guide us down a certain path,” said Kleinrichert. “I doubt this will be the last venture that either of us go on. This is just a first step, but I’d like to see it go pretty far. So we’re going to put hard work into it and see where it takes us.”