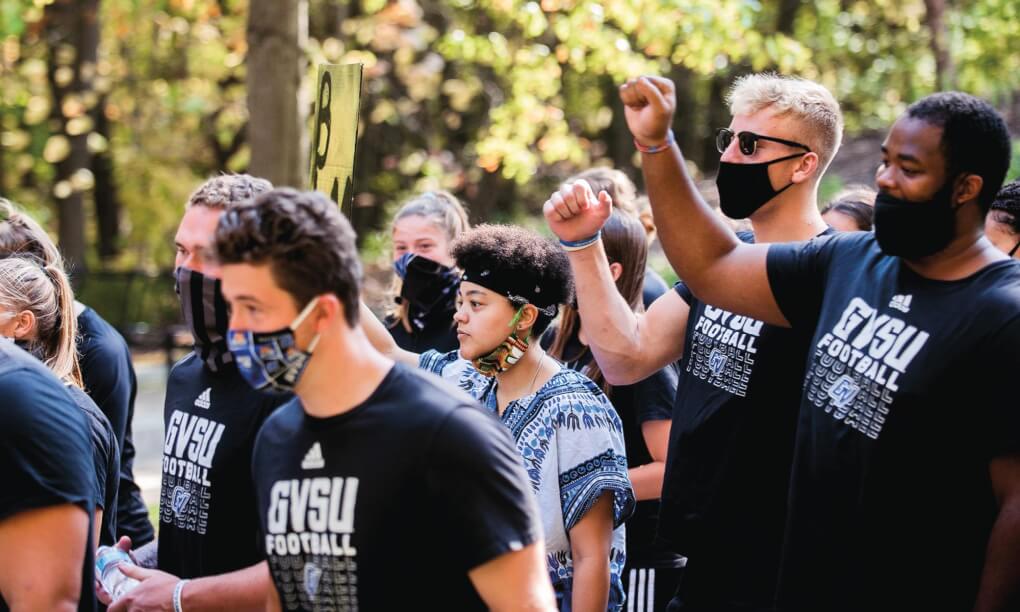 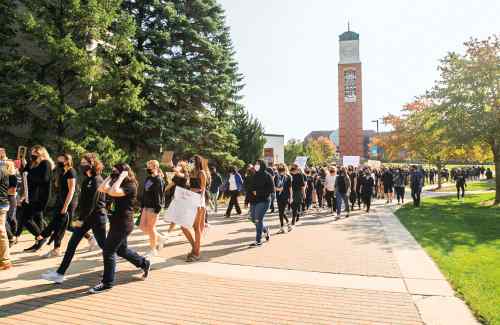 Football players and coaches were among GVSU community members who marched in support of the Black Lives Matter movement on the Allendale Campus in October. 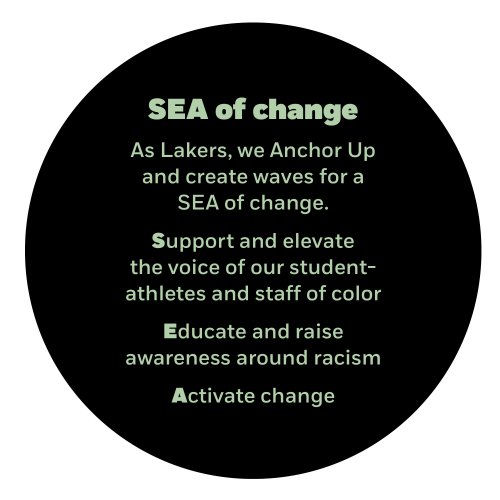 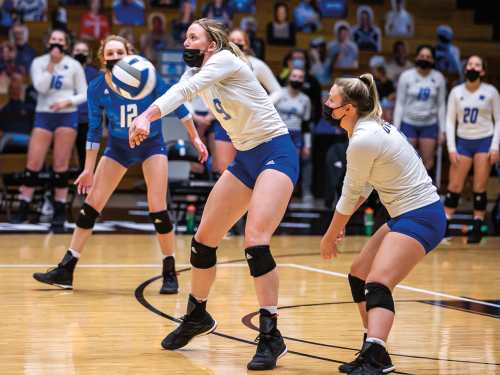 Keri Becker, director of athletics, said the protests and civil unrest throughout the country during the summer of 2020 prompted her to revisit the department’s diversity and inclusion programs and then ask coaches and staff members to do more.

“We had to determine as a department what our next steps should be,” Becker said. “I wanted to find out if we really were inclusive. We are a diverse group, yes, but are we inclusive? I needed feedback and our coaches really took the ball and ran with it.”

It began a yearlong, sometimes uncomfortable deep dive into assessing Laker athletics, learning — as teams and as a unit — about racial injustice, supporting Black student athletes and coaches, and activating change.

The Laker volleyball team played a modified schedule last spring and finished with a 12-4 record, losing to Northern Michigan in the semifinals of the GLIAC tournament in early April.

Junior outside hitter Ali Thompson (pictured above) said it took some adjustment to play in front of small, socially distant crowds.

“At first, games felt like scrimmages since there wasn’t anyone else in the arena,” said Thompson, an allied health sciences major from Cincinnati, Ohio. “One of our team’s favorite things about game days is having the Grand Valley band play. They are awesome and, along with our parents and friends, create a ton of energy in the gym.”

Thompson was named to the All-GLIAC Second Team as a sophomore and led the Lakers in kills with 314. She said the spring schedule may have meant less time in the weight room but the team will still be well-prepared for the fall 2021 season.

“Having just played a short season in the spring, we didn’t have as much down time but that is not necessarily a bad thing. It also means we will have only gone a few months since our last game when we resume in the fall,” she said.

After graduation, Thompson plans to enroll in graduate school to become a physician assistant.

Becker said it was important for the department’s charge to align with President Philomena V. Mantella’s charge to the entire campus community, work which continues through the Network of Advisors.

With help from the Division of Inclusion and Equity, a departmental climate survey was completed in December. Results showed that 88 percent of student athletes felt comfortable or very comfortable with the athletic department; 70 percent said they believe free and open discussion exists within their team; and less than 8 percent said they considered leaving GVSU due to team climate.

The inventory of diversity, equity and inclusion (DEI) work throughout the year ranged from team to team. Becker said football, volleyball and lacrosse were most intentional about engaging their student athletes through a myriad of programs, discussions and readings.

Junior linebacker Damon Wesley, a Black student, applied, saying it was too difficult to “watch what was going on and not do anything to help.”

Wesley said Zoom meetings with GVSU alumni and other leaders of color created honest conversations about microaggressions and acts of violence and led to good talks with his own teammates.

“The work has progressed in a good way,” Wesley said. “Teammates and people who don’t look like me, they are now asking me how I feel and if they can do anything to help.”

Ali Thompson, a volleyball outside hitter, said her team approached the DEI work in a way that suited the predominately white team, tactics like completing an implicit bias test and creating a video for social media, speaking out against acts of racism.

Thompson said her team has since had more open dialogues and remains passionate about learning more. The work continues her own education, she said.

“Two years ago, I took a course in intercultural competency and it was really eye-opening,” she said. “At that time I had not heard of white privilege and I wanted to learn more, so I started looking for things on my own.”

While fall sports will be in full swing soon, Becker said this work will continue and will likely create benefits on the playing field.

“You can’t be successful on the court or on the field unless you have a sense of belonging,” she said.

Mitchell agreed. “Coming from a year without competition, coupled with national events that impacted our roster, created a unique opportunity to draw our team closer,” he said. “Those deep bonds will no doubt have a positive impact during game days.”