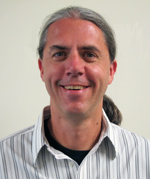 Donovan is Associate Professor of German in the Department of Modern Languages and Literatures where he has also been German Section Coordinator. Before coming to GVSU, he taught at Ohio University and at the University of Dallas. At GVSU he served on the University Library Advisory Committee for three years (Chair 2008-10) and the CLAS Personnel Committee from 2010-2015 (Chair 2014-15). In his role as Inclusion Advocate, he has been a member of numerous search committees.

He received his PhD from the University of Michigan. Much of his research has considered the role of literature in public culture. He examined the emergence of German language and literature as a field of study at institutions of higher education in Germany in the late eighteenth and early nineteenth centuries. He has published articles on literary culture in early nineteenth-century Germany and Switzerland and on literary festivals, literature houses, and the marketing of literature in contemporary Germany.

Donovan is a strong advocate for international education and study abroad. He helped to develop a faculty-led summer program and spent several summers traveling with GVSU students in Germany. He has also taught at the Pädagogische Hochschule Schwäbisch Gmünd through the CLAS faculty exchange. He studied German literature for two years at Christian-Albrechts-Universität in Kiel, Germany, and he spent two years as a graduate assistant in German at the Université de Lausanne in Switzerland. He has received grants from Fulbright and from the German Academic Exchange Service (DAAD) to study and do research abroad.


Page last modified December 20, 2021
Report a problem with this page