Students Get Busy With Research 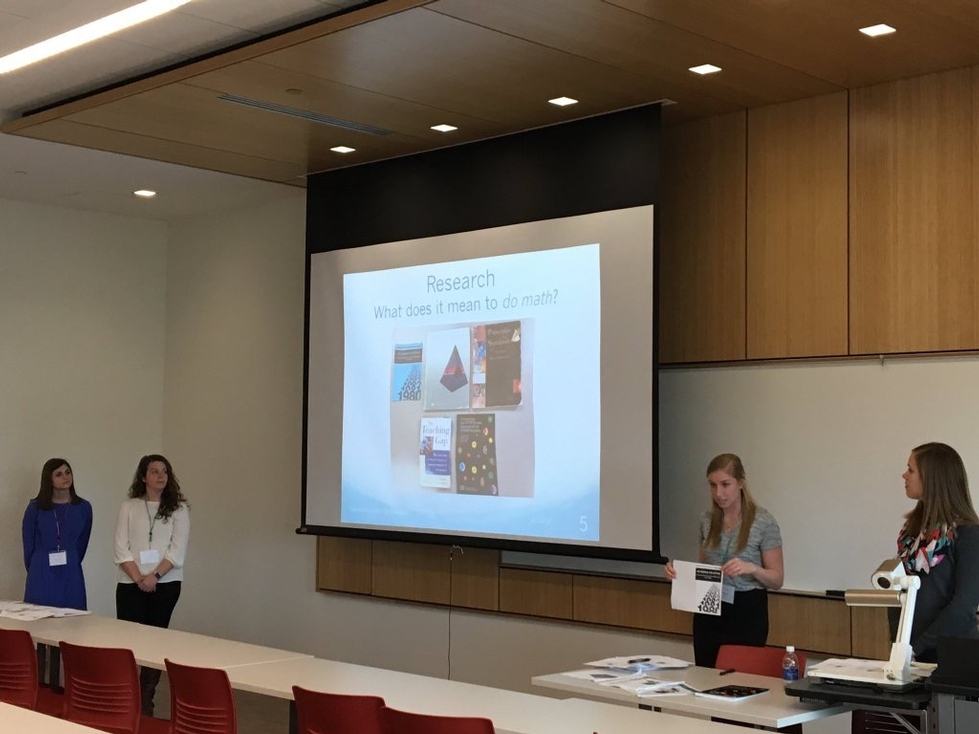 Undergraduate research is “an inquiry or investigation conducted by an undergraduate student that makes an original intellectual or creative contribution to the discipline,” according to the Undergraduate Research Council. At Grand Valley, undergraduate research is highly valued and students are encouraged to participate in research through multiple opportunities. The experience helps students improve their creativity, problem-solving, and independent thinking skills, develop expertise in a specific topic in their field of interest, and clarify their future career and academic goals.

During a research project, students learn background knowledge in their topic, figure out how to solve an open problem without any known previous solution method, and finally experience the elation of making a new discovery in their field. After such an experience, students are in a better position to decide whether they have a passion for specializing in their field and gain the skills to be ready for further research.

In the last year, more than 25 of Grand Valley mathematics majors, most of whom are aspiring K-12 teachers, were involved in undergraduate research projects in mathematics or mathematics education. The majority of the students completed a senior thesis course during which they completed a research project in a topic of their choice. Topics included investigating properties of certain graph families, analyzing how mathematics textbooks are presenting the mathematical topics and standards of the Common Core curriculum, and creating mathematical games to teach new topics and skills at the K-12 level.

Joining the students who completed senior theses were math majors who chose to do mathematics projects for their honors theses. Mathematics students can also be involved in funded research opportunities, such as the GVSU Math REU program, and Grand Valley’s Student Summer Scholars (S3) program open to all majors. In summer of 2015, GVSU math major Susanna Lange participated in the GVSU Math REU program, studying a variation of the popular Sudoku game under supervision of Dr. Shelly Smith. Another GVSU math major, Lindsay Czap participated in the S3 program under supervision of Dr. David Clark. Students who complete research projects often present their work at national, regional or local conferences.

Four GVSU math majors traveled to Seattle in January to present their work at the national Joint Mathematics Meetings Conference. Many students presented their work at the regional Math in Action conference, and many will present their research at the Student Scholars Day conference at GVSU. Students who prepared games in their senior thesis courses also presented their games at local schools or libraries to receive feedback from students and families.

In a senior thesis course, students conduct independent research under the supervision of a faculty member in the Mathematics Department. In Dr. Coffey’s course, titled “Standardized Mathematics Testing in K-8 Classrooms,” four students conducted research into the history of standardized testing and the history of what it has meant to “do mathematics” in the United States. Based on this research, the students developed a rubric that analyzes whether or not math items from standardized tests reflect what it means to do mathematics. The students presented their findings at the Math in Action conference, and at the Conversations among Colleagues organized by the Michigan Association of Mathematics Teacher Educators. Three of the four students will also present their research at the annual meeting of the National Council of Teachers of Mathematics.

About the research project, Dr. Coffey said “I appreciated how much of the project was student-directed. [The students] played a significant role in creating the course syllabus and developed the research question.” He added, “it was exciting to see the students apply what they have learned in other classes to create something new (the rubric). Often, students are content to be problem-solvers - finding answers to existing problems. These students stepped out of their comfort zone and became problem–finders.” The picture above shows Dr. Coffey’s students Kaileigh Wenglikowski, Andrea Pattison, Megan Reiley and Lauren Galasso presenting their work at the Conversations among Colleagues conference on March 19.

In summer of 2015, undergraduate student Lindsay Czap completed a Summer Student Scholars (S3) project on “Guessing Games with Cost Functions” under Dr. Clark’s supervision. She studied guessing games, which are exactly like 20 questions with numbers: One player thinks of a secret number (say, from 1 to one million), and the second player tries to guess it by asking yes-or-no questions (such as “Is your number even?”) Lindsay's project added two twists: First, the responding player may lie about one answer. This twist makes these games closely related to problems in modern digital communications. Second, every question costs a certain amount of money, and, of course, we want to keep costs as low as possible. Lindsay found a method that produces the cheapest possible set of questions that can work around one lie, for any set of numbers. She presented her research at the S3 Showcase and at the 2016 Joint Mathematics Meetings in Seattle. She also prepared a paper based on her results which will be submitted to a mathematics journal for publication.

As Dr. Clark reflected on this research experience, he said “This project was fantastically fun, not least because our meetings involved both playing games AND doing math -- at the same time.” His advice for other students considering working on such a project was “Give it a try! By digging deeply into a problem, you'll discover things that nobody else knows. Plus, professors don't bite.”

As the winter semester of 2016 comes to a close, a new group of students are getting ready for research projects at REU’s or S3 in the summer, and senior thesis courses in the fall. We hope that the Mathematics Department halls will continue to be abuzz with research project discussions for a long time.


Page last modified May 5, 2017
Report a problem with this page