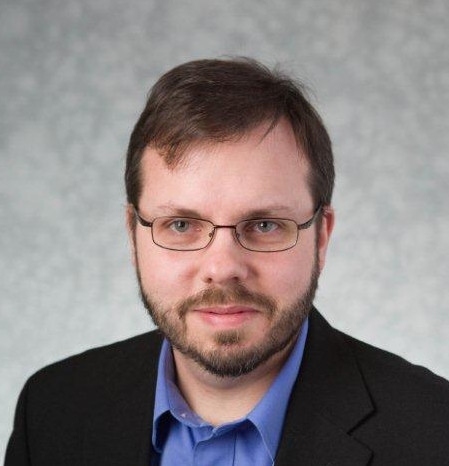 Professor Robert Talbert is the recipient of the 2015 Pew Teaching with Technology Award.  He is now in his fourth year as a member of the GVSU mathematics department.  While still in his former position at Franklin College in Indiana, Robert developed many professional connections with faculty at Grand Valley through social media, so joining this department in 2011 was a natural fit.

To illustrate, Robert frequently poses difficult questions of his classes and seeks their anonymous responses through hand-held devices called “clickers.”  Using the overhead projector in the classroom, Robert projects a multiple-choice, conceptual question and asks his students to consider it by themselves for a while before registering their response by clicking a button on the device.  The students’ responses are recorded by Robert’s computer where they are tallied and summarized to give Robert feedback on his students’ understanding.  When there is widespread disagreement about the correct answer, Robert asks the students to discuss the question among themselves in small groups.  In this way, students become engaged with the material as they help one another refine and deepen their understanding.  Through this technology, students develop into a community of learners helping one another in a risk-free environment.

In addition, Robert teaches most of his classes using a “flipped” classroom design in which students are first exposed to important ideas through pre-class experiences, such as watching a video or experimenting with a piece of software.  When students arrive for class, they are already prepared to dig more deeply into the day’s topic.  As Robert says, “the high-level learning occurs in the classroom in a social setting with their peers and one expert to guide them.”  To implement the flipped classroom, Robert has made numerous screencasts, sometimes in collaboration with other Grand Valley faculty, for courses such as MTH 201 (Calculus I) and MTH 210 (Communicating in Mathematics).  These screencasts, which are posted on the GVSUMath youtube channel, have found a wide, international audience.

In the 2015 spring/summer semester, Robert will be teaching the math department’s first fully online course, a section of Calculus I.  Planning for this course, Robert says, is requiring him to rethink almost everything about teaching.  For instance, if there are no class meetings, what does a pre-class activity look like?  How can the course accommodate timed tests?  How can technology best be used to connect the students with the instructor and to help students develop meaningful collaborations with one another?  Though there are a few online courses at Grand Valley, Robert’s is one of the first undergraduate courses in a STEM (Science, Technology, Engineering, and Math) field, and his efforts are sure to provide a model for others moving courses online.

Robert’s work and ideas have had a significant influence on his colleagues at Grand Valley.  In addition, Robert shares his innovative teaching ideas with an international audience through his blog, Casting Out Nines, hosted by the Chronicle of Higher Education.  He also travels widely giving about a dozen annual talks or workshops to a diverse set of audiences on the use of technology and the flipped classroom.  Last year, for instance, Robert traveled to Cardiff University in Wales to give a keynote presentation, which sparked a discussion over several days with dozens of faculty in the United Kingdom who are interested in modernizing the way mathematics is taught in British universities.  He has also recently consulted with the Harvard Medical School as they move entirely to a flipped classroom model.

The math department is pleased that Robert’s many creative contributions to our department and our students have been acknowledged through the Pew Teaching with Technology Award, and we thank him for all his hard work.  Incidentally, this is the 12th year in which this award has been made, and the third time the recipient is a member of the math department, as previous winners include David Austin and Will Dickinson.


Page last modified August 30, 2016
Report a problem with this page