Last October, Grand Valley math students and faculty joined others around the world to create what is most likely the largest fractal ever created.  By carefully folding over a million business cards and connecting them with a tab-and-slot system, this international collaboration, called the MegaMenger Project, successfully constructed a three-dimensional fractal known as a Level 4 Menger Sponge.  In addition to providing a hands-on experience of some fascinating mathematical ideas, this project connected its participants through their curiosity and love of mathematics.

Now that we are left with 20 of the original smaller cubes, we repeat this process with each of them.  And repeat.  And repeat until, well, forever.

The MegaMenger Project was created by mathematicians Matt Parker, who is also a stand-up comedian, and Laura Taalman.  Participants were supplied with a large number of cards, roughly the size of business cards, that they folded and connected together. 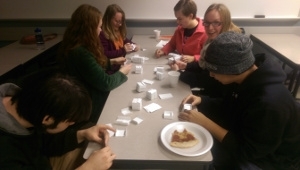 Building a “Level 0 Menger Sponge” requires folding six business cards and connecting them into a cube. 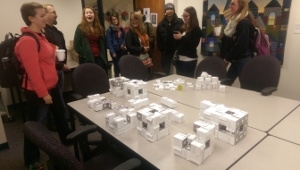 After 20 of Level 0 sponges have been constructed, they are connected to form a Level 1 Sponge. 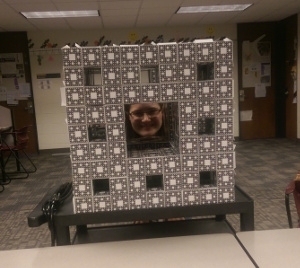 Then 20 Level 1 sponges are joined to form a Level 2 sponge and so forth. 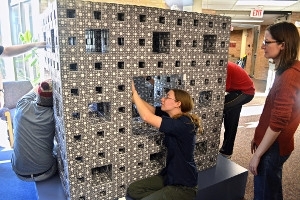 Since this Level 3 Sponge is about five feet on a side, it is impractical to ship it to be joined into a Level 4 Sponge.  Instead, the ultimate result of the Menger Sponge Project is a “distributed fractal,” consisting of 20 Level 4 Sponges that reside at Calvin as well as other sites in New Zealand, Spain, Sweden, China, and other international locations.

Besides providing students with a hands-on learning experience with fractals, this project provided a great opportunity for students and faculty to socialize while working on a fun task.  In addition, it connected Grand Valley students with an international community, reinforcing the message that mathematics truly belongs to everyone.


Page last modified April 5, 2015
Report a problem with this page