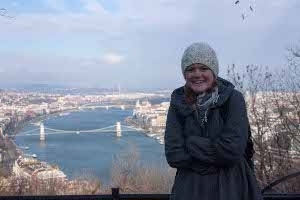 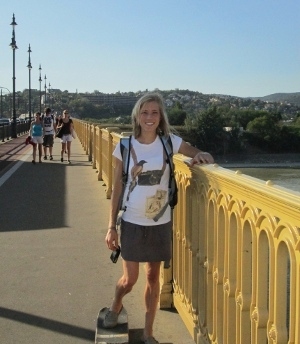 The BSM program proved an appealing opportunity to both Hannah and Alexis. As students in the honors college, their foundations courses in human civilization made each interested in learning more about other parts of the world; Budapest proved to be an appealing location as a beautiful, historic city with a rich and varied culture. Moreover, the program in Budapest offered a wide range of challenging mathematical opportunities that are not typically available to undergraduates. In fact, many of the courses are taught much like graduate courses in the US.

Alexis took classes in analysis, geometry, mathematical problem solving, and algebraic topology. Hannah's coursework included topology, conjecture and proof, combinatorial optimization, complex analysis, and a math education class. With as few as 4-6 students in each class, and not more than 15, instruction was often personalized as students were able to choose many of the topics that they studied. Each course involved a lot of work outside of class. Class time was primarily reserved for lectures, and students were expected to investigate on their own anything that they did not completely understand. In addition, classes were held in 3-hour time slots, an adjustment from the usual 50 minute GVSU courses, and the pace was typically faster as well. To make up for certain holidays, sometimes classes even met on Saturdays! As students who love learning new mathematics, they found a great deal to encounter in the program.

Among the highlights of their time abroad were the combination of living in an incredibly beautiful place, gaining new friends, and learning a lot. Alexis particularly exploring the city on her skateboard, finding something new every day, even after living there for five months. Hannah appreciated living in Pest, close to the city center, and the chance it offered to experience genuine Hungarian culture in such locations as the Opera House and a local church. She also enjoyed running along the Danube River and going to some of Budapest's many public Turkish baths. There they could switch between hot and cold tubs, steam rooms and saunas ... a relaxing way to spend time with friends. 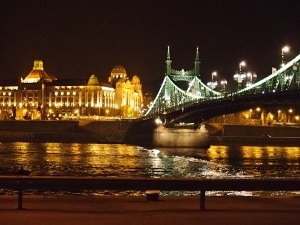 When asked about the best part of their experiences, these students were effusive in their praise for studying abroad generally, and BSM in particular. Alexis says, "Studying abroad is about immersing yourself in a completely different culture and overcoming challenges that most Americans do not encounter. I will probably never again be able to call a place abroad "home". It was an experience like no other, and I highly recommend it to anyone who seeks a challenge." Hannah says "I couldn't have spent the semester doing anything more fun or rewarding. I am so grateful to have had this opportunity. It was an excellent program and semester."

After graduation, Alexis is planning to attend graduate school to pursue a PhD and become a mathematics professor. Hannah is currently exploring different employment opportunities, along with the possibility of attending graduate school in the near future. 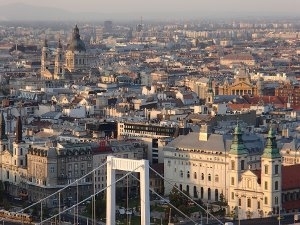 Page last modified June 9, 2017
Report a problem with this page