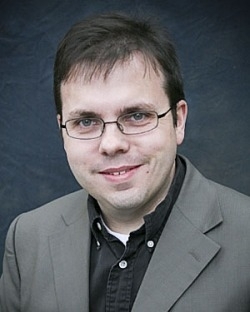 In Fall 2011, the department welcomed a new faculty member, Dr. Robert Talbert. Robert is originally from White Bluff, Tennessee. He received his undergraduate degree in mathematics with minors in English and psychology from Tennessee Technological University. His Ph.D. is from Vanderbilt University in the area of algebraic topology. His current research interests include cryptography, computational geometry, and the use of technology in creating active learning environments in the area of scholarship of teaching and learning.

Robert's journey into the mathematics world started with a challenge from his roommate in sophomore year. At the time, he was a psychology major and his engineering roommate challenged him to take a calculus course. After his great experience in the honors calculus course he took, he declared mathematics as a major while keeping psychology as a minor. Robert's interest in becoming a professor strangely predates his interest in mathematics. While in middle school, after hearing from his older sisters going to college at the time about the glorious college professor life, Robert decided that being a college professor was his dream career. His feelings were reaffirmed when he taught calculus in his first year in graduate school. He knew for sure that he wanted to teach for the rest of his life.

Robert comes to Grand Valley with extensive teaching experience, first at Bethel College and then at Franklin College, both in Indiana. In contrast with GVSU, both colleges are very small, each with less than 2000 undergraduate students. Robert says that "I knew almost every student in Franklin College." He adds that his current position at GVSU allowed him the time and space to do different things. He is able to spend more time on scholarship and service, in addition to concentrating on his teaching. He, in fact, has enjoyed working with the students at GVSU in various contexts. He found the Grand Valley students to be "super hard-working, industrious, smart and nice". He is currently supervising two students working on research projects on the topics of elliptic curves and columnar transposition ciphers. He looks forward to working with more students in the future.

As an outgrowth of his professional work, Robert has maintained a blog on teaching and mathematics since 2004. Robert says that he started blogging in order to get his thoughts out of his mind. His blog at the time focused on two main topics: parenting/life issues and teaching/mathematics issues. In 2006, he split his blog into two separate blogs each concentrating on one topic. The mathematics blog survived and was folded into the Chronicle of Higher Education Blog Network in 2011; it is available here.

When not teaching or blogging or updating social media information, you can find Robert cooking, running, playing bass guitar and doing "computer stuff", as he puts it, meaning learning and doing computer programming. In regards to his cooking, Robert says that he indeed does most of the cooking in the family, while in regards to running, he considers himself more of a beginning runner working towards the goal of participating in his first 10K run this summer.


Page last modified June 14, 2017
Report a problem with this page