Daniel Gorski is the 2008 Outstanding Senior in Mathematics 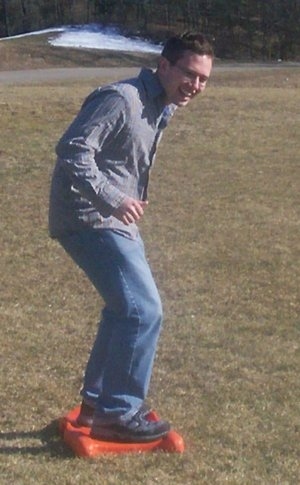 Having always been good at mathematics, Daniel Gorski planned to study more of the subject upon his arrival at Grand Valley as a freshman hailing from Sparta, MI. At the time, however, he had no idea that studying mathematics might one day lead to an actual career: Daniel says, "It wasn't until two years into my degree that I realized, much to my satisfaction, that mathematics was an employable major." Thus, he has been able to not only enjoy his coursework for its own sake, but to look forward to a wide range of possibilities after graduation. Daniel is currently investigating different employment options. He has applied to the National Security Agency for a position as a mathematician, and also has applied to several graduate schools.

In the summer of 2007, Daniel was one of 8 students nationwide who were selected to participate in the math department's Research Experience for Undergraduates (REU), an eight week program funded in part by the National Science Foundation in which the participants conduct research in teams of two under the supervision of a GVSU mathematics faculty member. When asked to describe his best experience here at Grand Valley, Daniel states "Hands down my favorite experience was the REU. I benefited in more ways than I can list, and I will forever be grateful for the opportunity." And while all the hard work and interesting learning has been the focal point of his time here, Daniel is not averse to having fun: he shares that another memory he will long treasure is seeing Professor Jon Hodge get a pie in the face on Pi Day, the annual mathematics celebration on March 14.

Besides his mathematics courses, Daniel has enjoyed the general education classes he has taken as part of the liberal education program at GVSU, especially the courses he has taken in philosophy. Away from school, Daniel enjoys gardening, playing video games, and reading books; he is looking forward to getting married in late June.

The mathematics department congratulates Daniel for all of his fine work and contributions to mathematics at GVSU, and wishes him well in all his future endeavors.