Graduating senior Nate Burch spent last summer worrying about life insurance premiums as part of his work in the Research Experiences for Undergraduates (REU) program at Worcester Polytechnic Institute, located in Worcester, Massachusetts.  This eight-week program, the only REU in the country that specializes in industrial mathematics, brought twelve students from diverse backgrounds together to work with eight faculty advisors.  At the beginning of the program, the students split into groups of four, which were assigned to a company, and began work on a problem designed by the company.

Nate’s group, which also included students from Montana, France, and California, worked with John Hancock Life Insurance in Boston to develop a mathematical and statistical cost model that would predict the cost to the company of extending a life insurance policy.  This project involved some operations research, lots of probability, and a considerable amount of computer programming.  After two weeks creating the mathematical model for the problem, Nate’s group spent the next four weeks writing a computer program to implement the model so that it could be used by actuaries at John Hancock.

Besides the mathematical work, Nate gave many presentations on this work to other participants in the REU, to employees at John Hancock, and at the Math in Industry conference hosted by Worcester Polytechnic Institute.  Nate says that his experiences at Grand Valley—in particular, the classes he has taken, the programming skills he has gained, and the written and oral communication that has been stressed—prepared him well for this REU.

While Nate put in many long hours working with his group mates, there was also time to make new friends with whom he made a few trips to Boston and Providence to visit museums and enjoy the culture.  Nate, who plans to further his interests in applied mathematics in graduate school, says he appreciated having the opportunity to do work in applied mathematics and found the summer to be a wonderful experience.

Matt Stamps, a junior mathematics major, was one of 9 students from colleges and universities around the country to attend the Mathematics REU at Valparaiso University this past summer.  He joined a team of two other students and a faculty member from the Valpo College of Business to tackle a problem in traffic networking. 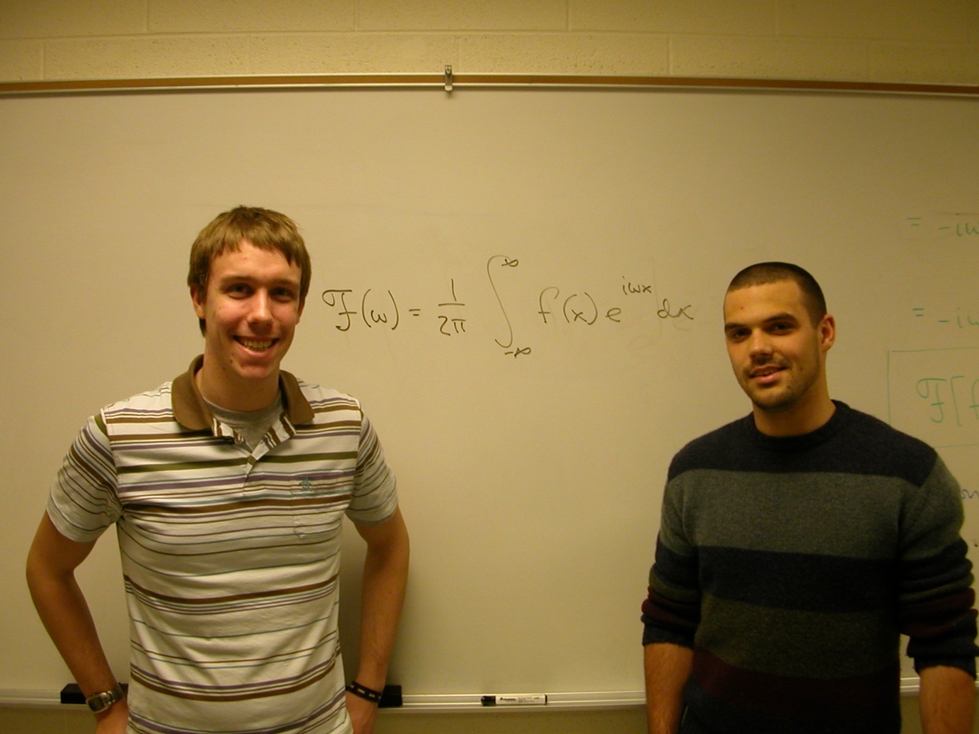 Matt’s partners were students from New York City and Montana, and together they sought to decide how to minimize the number of toll booths in a traffic network.  The basic idea in the problem is that if every motorist acted solely in self interest, it’s likely that certain roads will become overly congested.  The addition of toll booths provides an added variable (beyond the shortest distance between two points) that traffic engineers use to help even out traffic flows.  The problem of where to add toll booths is a standard linear programming problem (similar to problems considered in Math 360 - Operations Research), but the problem of how to redirect traffic while minimizing the number of toll booths takes the problem to a much higher level.

Through his faculty mentor, Matt learned that another group of researchers was also working on this problem, though using different tools and perspective.  He said it was exciting to know the problem was so current and of interest to many people.

The process of tackling an open problem, working with students from other schools, and learning a lot of new mathematics led Matt to learn a lot about himself.  He enjoyed the experience, though he was a bit sorry to report that he didn’t have the chance to do a single proof in the course of his summer research.  For the coming summer, Matt has been awarded an S3 (Summer Student Scholars) grant with Professor David Austin to continue to cultivate his many interests in mathematics through doing research in a different area of the subject: problems involving circle packings.  In the fall semester of 2006, Matt will continue his studies as he becomes the first GVSU student to study abroad at the famous Budapest Semesters in Mathematics in Hungary.