Greetings from the Department Chair

Welcome to the fourth edition of the Grand Valley State University Department of Mathematics Newsletter. As has been the case for the last several years, the department has undergone many changes. We welcome four faculty to tenure track positions: Stephen Blair, Manish Chakrabarti, Shelly Smith, and Matt Wyneken. At the end of this academic year we will also have three retirements: Mary Ellen Barber, and affiliate faculty Gene Dornbush and John Kirchgessner. We wish them well. 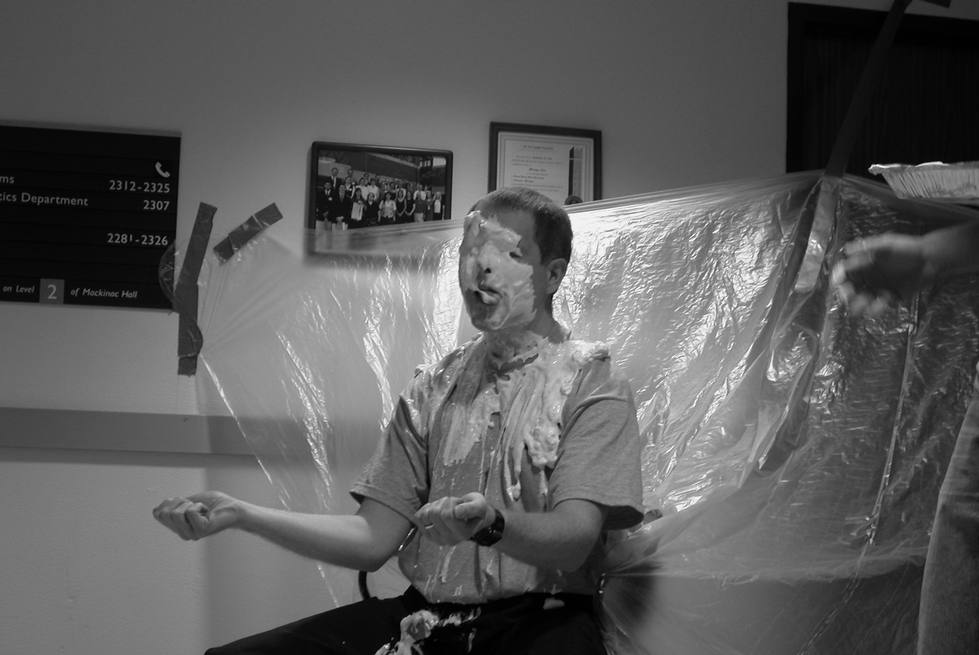 There were some other personnel changes in the department this year. Matt Boelkins is now an Associate Professor with tenure and Karen Novotny has been promoted to the rank of Professor. This is well deserved recognition for both. I had a relaxing and productive sabbatical in the fall, Jane Mays is on sabbatical this winter, and Matt Boelkins has a full year sabbatical.

As you will read inside, two of our faculty have recently been recognized with honors. Char Beckmann was presented with the Distinguished Contribution to a Discipline award by GVSU and Ted Sundstrom has been named as the recipient of this year’s Award for Distinguished College or University Teaching of Mathematics from the Michigan Section of the Mathematical Association of America (MAA). Congratulations to both.

Over the last three summers, the department has hosted a Research Experiences for Undergraduates (REU) program funded by the National Science Foundation. Last summer, four faculty (Ed Aboufadel, Will Dickinson, Steve Schlicker, and Jody Sorensen) worked with 8 students on research problems in wavelets, dynamical systems, spherical and hyperbolic geometry, and the Hausdorff metric geometry. The students who participated in the research were Kevin Brink (University of San Diego), Drew Colthorp (GVSU), Matt Katschke (Ohio Northern University), Kris Lund (GVSU), Amanda Morris (Haverford College), Patrick Sigmon (Wake Forest University), Jodi Simons (University of New Hampshire), and Abby VanHouten (Muhlenberg College). We had an enjoyable and productive summer. By the end of the program, the students had produced a major research paper, and had given two major presentations. The first of the presentations took place at the Michigan REU conference at Hope College. This conference involved REU participants from programs at Grand Valley, Hope College, and Central Michigan University. At the end of the summer, the REU students gave presentations at MathFest, the annual summer national mathematics conference of the MAA, which was held in Providence, RI. Matt Katschke won a prize for his presentation at MathFest, as did Grand Valley student Nate Burch.

Our REU grant for this program ended in February, 2005. A team of 11 faculty, Matt Boelkins, Will Dickinson, Paul Fishback, Jon Hodge, Reva Kasman, Filiz Dogru, Steve Schlicker, Jody Sorensen, Akalu Tefera, Clark Wells, led by Ed Aboufadel submitted a new proposal to the NSF to continue our REU. I am pleased to report that the NSF has funded this grant and we will be hosting an REU site for the next five summers.

This newsletter marks the debut of our new editing team: Reva Kasman and David Austin. I want to thank them for the wonderful job they did in creating this newsletter. I hope you will use this newsletter to share your successes with us and let us know how you are doing. If you have the opportunity to return to campus, I encourage you to do so, to stop by and visit your old faculty friends, and to take advantage of the many opportunities that are available at Grand Valley State University.