Greetings from the Department Chair

Welcome to the third edition of the Grand Valley State University Department of Mathematics Newsletter. As has been the case for the last several years, the department has welcomed new faculty to tenure track positions: Filiz Dogru, Karen Heidenreich (who has been with us for the last three years as a teaching postdoc), and Paul Yu. We have also seen some resignations and retirements: Alverna Champion, Ernie Palmer, and Phil Pratt.

In other faculty news, John Golden and Clark Wells have been promoted to Associate Professors with tenure; Jane Mays was also awarded tenure. David Austin, Carl Arendsen, and John Golden were on sabbatical leaves in the fall, while Clark Wells is on leave this winter.

As we have done for three of the last four summers, the department hosted a Research Experiences for Undergraduates (REU) program funded by the National Science Foundation. Ed Aboufadel, Steven Schlicker, Matt Boelkins, and Clark Wells worked collaboratively with eight sophomore and junior mathematics students on research problems in mathematics. The students who participated were Chris Bay (Truman State), Lindsey Bromenshenkel (Bemidji State), Justin Hogg (Pittsburgh), Amber Lembcke (Concordia), Jen Miller (Bucknell), Julie Olsen (Elmhurst), Ben Vugteveen (GVSU), and Jesse Windle (Nebraska). We divided into four research groups: Julie and Jesse worked with Ed on using wavelets to break captchas; Chris and Amber worked with Steve to investigate the geometry of the Hausdorff metric; Lindsey and Justin conducted work with Clark in Lie Theory and its relations to rotations in 3-dimensional space; and Jen, Ben, and Matt investigated how certain properties of polynomial functions depend on the distribution of the polynomial’s zeros. 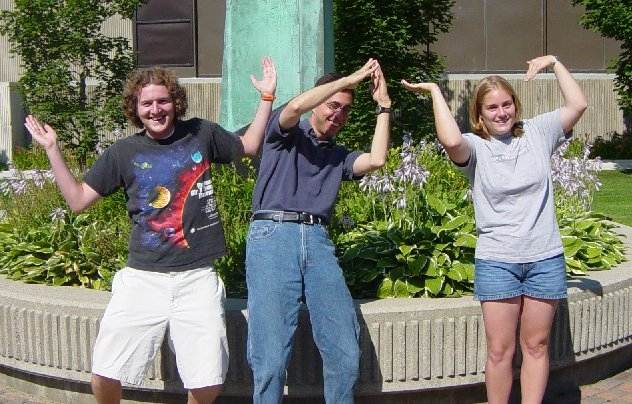 Is this a captcha? Professor Ed Aboufadel with students Jesse Windle and Julie Olsen.

By the end of the program, the students had produced a lengthy research paper and given two major presentations. The first of the presentations took place at the Michigan REU conference at Central Michigan University, along with REU participants from programs at Hope College and CMU. At the end of the summer, six of our REU students gave presentations at MathFest, the MAA’s annual summer national mathematics conference, which was held in Boulder, Colorado.

Our REU students have even won several awards, providing wonderful recognition for GVSU. Chris Bay had his MathFest talk recognized as a “Best Presentation” (one of 9 such awards out of 53 presentations) at MathFest. Chris also presented a poster at the Annual Joint Meetings of the American Mathematical Society and the MAA, held in January in Phoenix, and won an award for his poster at this conference (one of 33 awards out of 108 entries). Lisa Driskell, one of our REU students from the summer of 2002, recently won the annual Greg Mellen Memorial Cryptology Scholarship for her article based on her work (with Ed) on wavelets and steganography (the science of hiding messages in images). The article will appear in the April 2004 issue of Cryptologia.

I want to thank David Austin, Matt Boelkins, and Paul Fishback for their fine work in creating this newsletter. I hope you will use this newsletter as a reminder to stay in contact with us. If you have the opportunity to return to campus, please stop by and visit your old faculty friends and take advantage of the many opportunities that are available at Grand Valley State University.