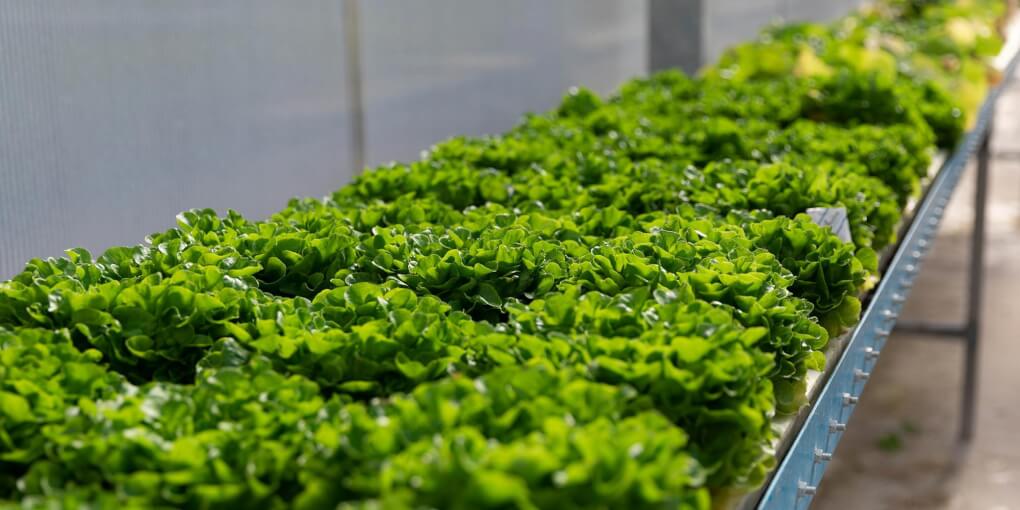 Revolution Farms grows five varieties of lettuce: sweet crisp, romaine, bibb, red oak, green oak. Some are sold individually, others are mixed in salad blends. Packages of the lettuce are available at area Michigan Family Fare, VG’s and D&W supermarkets, Forest Hills Foods, in many area restaurants and bars, and available for purchase on Saturdays at the Fulton Street Farmers Market.

Michigan is known for many agricultural crops, namely apples, cherries, corn, soybeans and potatoes, but one it’s not known for is lettuce. That’s because about 98 percent of the lettuce grown in the U.S. comes from California and Arizona — states where a warmer climate helps production.

One Grand Valley alumna is working to bring some of that lettuce production to West Michigan through a sustainable aquaponics farm southeast of Grand Rapids called Revolution Farms.

Marguex Bouwkamp manages human resources and business development at the farm and works to place products on the shelves of vendors to provide a fresh and local alternative to lettuce that’s been on a truck from California or Arizona for a week.

“What we offer at Revolution is produce that’s harvested from a sustainable and environmentally friendly farm that can then be on shelves here in West Michigan in just a day or two,” Bouwkamp said. “It makes a world of difference in terms of its nutritional value, how long it stays fresh and how it tastes.” 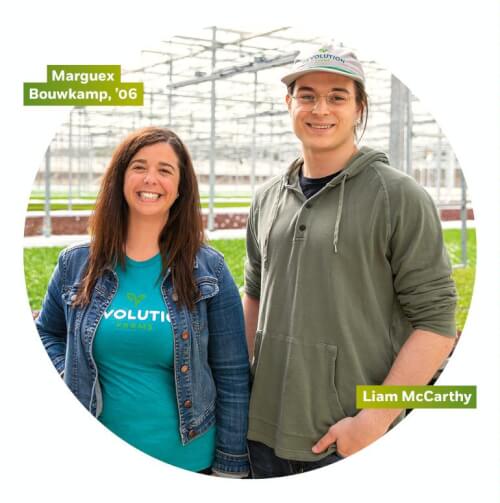 Liam McCarthy, a sophomore at GVSU, spent the summer on an internship at the farm.

He was initially interested in the opportunity because of a class he took at Grand Valley called “Food for Thought” that addresses issues of food production, sustainability, food deserts and more. While he started as a business major, he has changed his major to environmental sustainability due to his experience at Revolution Farms.

“Watching the product chain come together has been very interesting to me,” McCarthy said. “It’s pretty amazing to see this go from the seed stage to where they’re being pulled in for harvesting.”

The farm grows lettuce hydroponically, which means the plants grow in a tiny plug of dirt that floats on a raft in nutrient-rich water, allowing the plants to be grown in very close quarters, which increases yield.

Bouwkamp said Revolution Farms can produce the same amount of lettuce in a one-acre greenhouse as it would take a traditional farmer approximately 80 acres to grow.

The hydroponic production process and seasonally adjusted grow lights allows the crops to grow year round in the colder climate of Michigan.

“This process lets us offer customers the same lettuce in December as in July,” Bouwkamp said. “It’s a big reason we’re doing this.”

The lettuce starts as a seed and it’s implanted in what’s called a “plug” of dirt, about one cubic inch, where it germinates for about two weeks. Once the plant starts to develop small leaves, it’s moved into a floating raft with holes to hold the plugs, and then it’s loaded into the water to grow. After that, it takes about three weeks for the plants to fully form, depending on the variety, before they are moved off the water and taken for processing and packaging.

Depending on orders from supermarkets and restaurants, the farm aims to pull approximately 350 rafts of produce per day, each with either 18 or 36 plants. Total average yields are about 5,000 pounds of lettuce per week. 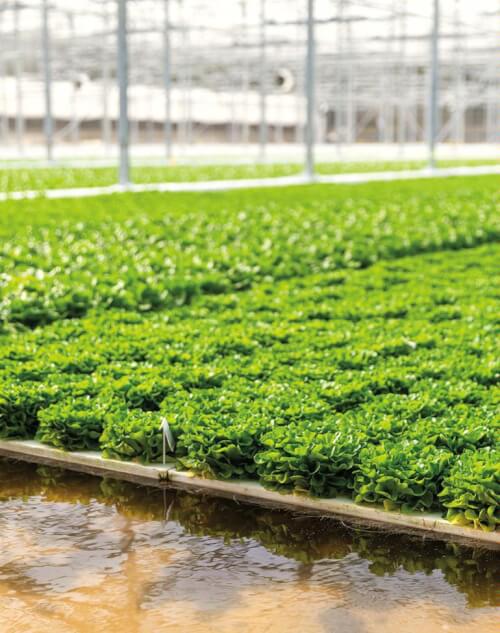 “Our major goal is to disrupt the food chain and make people aware that local, healthy consistent food should be important to them.”

“Our customers tell us that the freshness of this lettuce is a big change from what they were used to, and that’s because this isn’t sitting on a truck for a week before it’s getting to the store shelves or the cooler in a restaurant,” Bouwkamp said. “This is coming from 10 or 20 miles away, not thousands of miles away.”

Other sustainability factors include water and land use. Even though the plants grow on the water, there is no water lost to runoff, and water is recirculated in a filtered, contained system. The system also allows crops to be turned over about every two weeks, compared to only twice a year on an outdoor farm.

Bouwkamp also said almost nothing at the farm is wasted. Roots and leaves of plants that aren’t used for production of orders are collected and given to a local pig farmer to feed his animals, and lettuce that isn’t used for orders is given to Feeding America West Michigan, a nonprofit organization that works to feed the hungry. Even the growing materials, including the foam floating trays and the seed plug containers are either recycled or repurposed. The farm does not use chemical pesticides, instead relying on specific blends of beneficial bugs that keep pests out of the greenhouse.

“Our major goal is to disrupt the food chain and make people aware that local, healthy consistent food should be important to them. The face of agriculture is changing and Revolution Farms is leading the way here locally,” Bouwkamp said. “We’re excited to supply this beautiful, healthy produce to our local community and West Michigan families.”