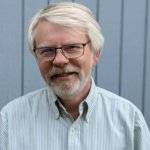 George is professor of Chemistry.  He received his PhD in Chemistry from Cornell University and did postdoctoral work at the University of Minnesota.  Before coming to GVSU in 2001 he taught at The Ohio State University. He has also held appointments as a visiting scholar at Sydney University (Australia), at the Max Planck Institute for Dynamics and Self-Organization (Germany), and at Durham University (United Kingdom).

At GVSU he has served with the CLAS Personnel Committee, the Principles for Equity in Allocation Task Force, and the Academic Policies and Standards Committee.  He was Unit Head in Chemistry from August 2013 to December 2017.

His scholarly work mainly addresses the forces and resulting atomic motions during collisions and chemical reactions of small molecules. This work, almost all collaborative, involves both experiment and computation.  At GVSU he has a longstanding experimental collaboration with Prof. Stephanie Schaertel studying the effects of collisions on spectroscopic line shapes.  Recent computational and theoretical efforts include studies of the dynamics of ozone photodissociation and high-energy collisions of oxygen atoms with nitrogen such as those occurring during atmospheric reentry of spacecraft.


Page last modified May 16, 2022
Report a problem with this page