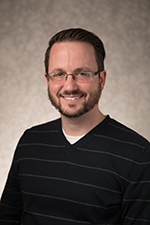 Aaron Lowen, Professor of Economics, earned his B.A. in Economics at the University of Northern Iowa, and his M.A. and Ph.D. in Economics from the University of Iowa. He currently serves as the Chair of the Finance Department in the Seidman College of Business at Grand Valley State University. His current research projects include estimating the effects of Title IX legislation on women's health outcomes, the impact of legalizing same-sex adoption on labor force outcomes, and the long-term impacts of community-based learning on students and faculty. He was awarded a Pew Teaching Excellence Award in 2007, was a finalist for the GVSU Outstanding Teacher Award in 2012, and received the Outstanding Faculty Mentor Award from the GVSU Graduate Student Association and the GVSU Distinguished Graduate Mentoring Award in 2014. Aaron served as a GVSU Presidential Fellow in the area of enterprise learning and development from January 2020 to August 2021.

Page last modified August 23, 2021
Report a problem with this page